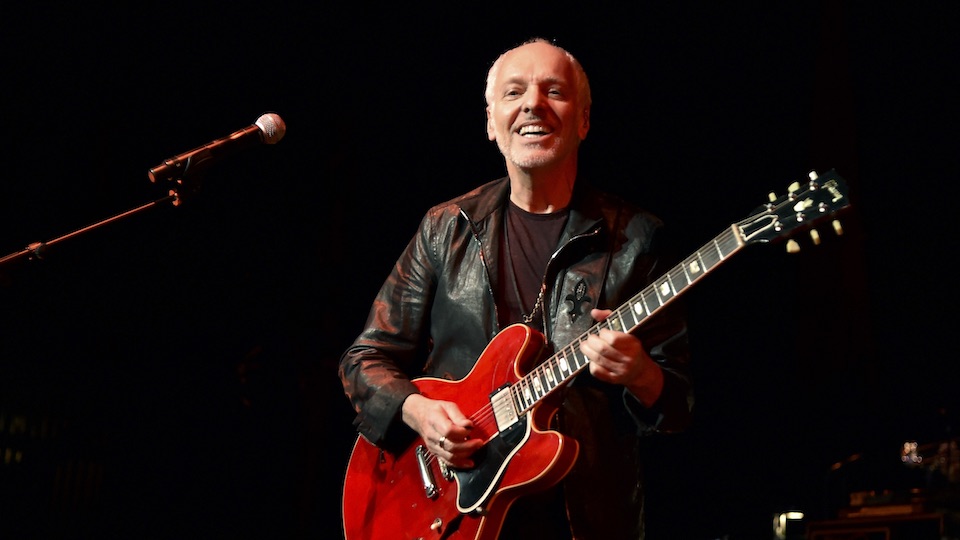 In 2011, Peter Frampton embarked on a massive 94 date tour to commemorate the 35th anniversary of his landmark album Frampton Comes Alive. He didn’t look anything like the 20-year old that filled stadiums in the late ’70s, but you would never know it from the sound that came out of the audio system; the energy was still high, the guitar licks were still fresh, and that damn talkbox still rocked people out of their seats. It was the peak of a comeback that had been over thirty years in the making.

A few years later Frampton was touring on his usual circuit but something was different; some notes were missed, his movement seemed a bit off, and a few stumbles were had on tour. It didn’t faze many audiences nor Frampton who was convinced he was falling victim to age unaware a clock was ticking faster than previously thought on one of rock ‘n roll’s most unique and overlooked careers.

On the surface, Frampton’s career may seem like a one-hit wonder endeavor with FCA, but not many rock stars have had the longevity that Frampton has found. He got his start with the psychedelic rock band The Herd in the mid-60s and joining Small Faces’ guitarist Steve Marriot’s new project Humble Pie shortly after. In 1972 Frampton left Humble Pie to embark on a solo career. He put out four albums in the early ’70s with moderate success, but it was only a matter of time before Frampton became an icon of the decade.

In 1976 the world was introduced to an immortal live album that shook the foundations of popular rock n roll. Frampton Comes Alive became as synonymous with the 1970s as bell-bottom pants and shag carpet. The concert was (mainly) recorded in San Francisco’s famous Winterland Ballroom and reverberated throughout the years with hits in “Baby, I Love Your Way”, “Show Me the Way”, and the 14-minute epic “Do You Feel Like We Do?” Frampton had become a worldwide sensation overnight.

However, the success of FCA proved to be too much. Such a colossal offering set a nearly impossible standard to meet for subsequent releases. Frampton knew no matter what he did it would never stack up to the success of FCA. Although producing Frampton’s highest-charting single, 1977’s I’m In You failed to live up to the massive hype of its predecessor and was widely viewed as too commercial. A year later Frampton was involved in a car accident that led to drug abuse and atop the massive failure in the 1979 Sgt. Pepper Movie, it seemed Frampton’s career had burnt out as soon as quickly as it came to fruition.

Quickly bowing out of the spotlight come the new decade, Frampton scraped by in the ’80s with lackluster offerings in Breaking All The Rules and The Art of Control. His career was all but left for dead until a familiar face pulled up Frampton from the depths of obscurity; David Bowie. Bowie, who had been friends since childhood with Frampton, enlisted Frampton to be his lead guitarist on his 1987 Glass Spider tour and for the first time in almost a decade audiences were reminded of the man who accompanied every teenagers’ vinyl collection a decade before making it only a matter of time before Frampton got his groove back.

Over the next two decades, Frampton rode the spark Bowie provided to reignite his career. With his popularity and relevance slowly back on the rise, Frampton would release a sequel to his magnum opus with Frampton Comes Alive II in 1995 and would never find himself in lack of touring support again. A steady flow of studio albums would come in the new millennium and in 2006 Frampton won a Grammy for Best Pop Instrumental Album with Fingerprints. Humbled by the comeback, Frampton continued to give his all to fans rocking out night after night filled with the distortion, reverb, and 70s vibes that spring eternal youth in the hearts of rock ‘n’ roll fans everywhere.

The past few years had been a pleasant time in Frampton’s life to take comfortably at his own speed. In 2014 he had released an experimental album Hummingbird in a Box: Songs for a Ballet followed by an album of retrospective acoustic covers from his own catalogue in 2016. But soon things behind the scenes started to subtly stray from the norm. Frampton started feeling increasingly weak and had collapsed multiple times on tour. After consulting with doctors Frampton was told he had contracted a rare disorder called Inclusion-Body Myositis (IBM); a degenerative muscle disease with no specific treatment available. Overcome with emotion Frampton thought it best to keep it a secret with his family and band members until the time was right.

In February of 2019, Frampton informed fans that he was suffering from Inclusion-Body Myositis in conjunction with his farewell tour announcement. The timeline for Frampton’s muscular regression remains unknown at this point. For now, Frampton feels that he still has a lot to give and enough to make it count. In addition to the tour, Frampton is working like a maniac to finish recording what will be his final studio albums before the Inclusion-Body Myositis takes hold. “I want to go out screaming,” he told Rolling Stone magazine.

It’s difficult for Frampton and fans alike to helplessly watch the condition progress, but no matter how the disease will affect Frampton we will forever be grateful for his contributions. No disease can ever take that away.

-Photo Credit: Peter Frampton performs onstage at One More For The Fans! – Celebrating the Songs & Music of Lynyrd Skynyrd at The Fox Theatre on November 12, 2014 in Atlanta, Georgia. (Photo by Mike Coppola/Getty Images for Blackbird Productions)