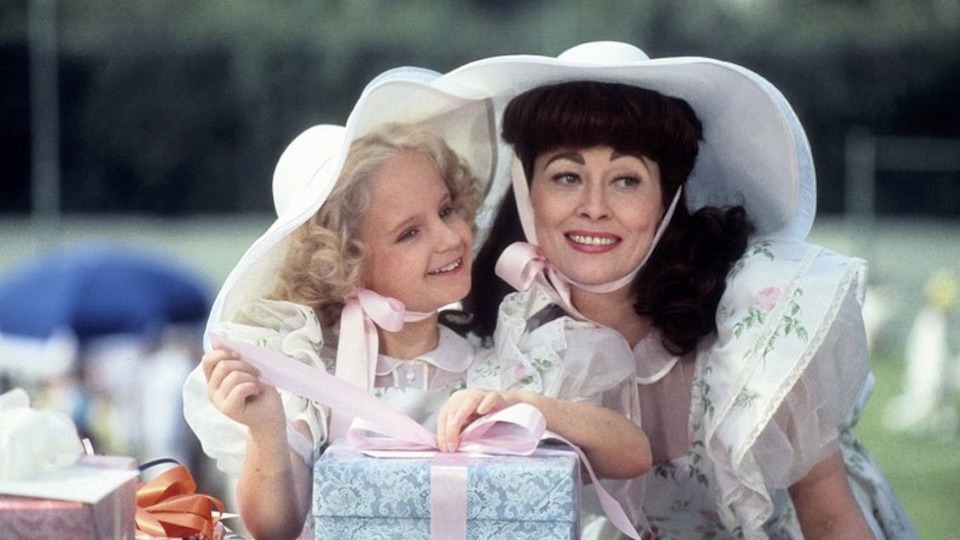 Cult movies are cinematic joys that surprise and engage us beyond expectation. They get under the skin and into our consciousness more than anticipated, yielding catchphrases, memes, Halloween costumes, repeat viewings, and obsessions. It’s all to do with the “zeitgeist,” or the magic of images that capture an era. Not all are high-quality; some are poorly acted, yet those same amateurish movies can yield a mysterious power. The 1980s yielded a bumper crop of these cheesy favorites. Dig into this partial selection of cult movies, load up on popcorn and prepare to be transported.

Related: “10 Movies That Defined Being a Teen in the 80s”

Frank Perry’s gorgeously shot, brilliantly costumed, and madly overwrought movie (based upon the overheated book by Joan Crawford’s daughter Christina) was released to scathing reviews and global mockery. It was probably intended to be a conventional Hollywood rendering of the abusive, agonizing relationship Christina had with her superstar mother. But Faye Dunaway’s scenery-chewing and eerie cartoony resemblance to Joan Crawford yielded the ultimate “so bad, it’s good” result. Catchphrases like “No…wire…hangers…EVER!”, “Figures you would know where to find the boys AND the booze” and “Don’t f** with me, fellas…this ain’t my first rodeo!” reverberate to this day. Terribly upsetting at moments, spottily acted and often unintentionally funny, Mommie Dearest has become a guilty pleasure over the decades.

Dark, nihilistic, and unique, Liquid Sky is the crazed combo of a defunct underground punk scene, science fiction, immense stylishness, and self-loathing. It also has great dry gallows humor and is an artful feast for the eyes. Performance artist Anne Carlisle stars in the dual role of a soulless lesbian decked out in beautifully debauched duds and her smarmy gay male nemesis. The title refers to the alteration induced by heroin; fittingly, the heroin(e) turns all her sex partners to mist upon orgasm. Not a feel-good piece by any stretch, but visually arresting and memorable.

Brother from Another Planet (1984)

Filmmaker John Sayles has had an impressive list of commercial and critical successes (Baby, it’s You, The Return of the Secaucus 7, Something Wild, The Lady in Red). But this early project, shot in slightly raw fashion and on quite a low budget, has become an enduring love fest. The poignant story of a slave who escapes his home planet and winds up on the gritty streets of Harlem is superbly acted, filled with clever street wisdom, stellar physical humor and quiet charm. Joe Morton plays the titular brother who never utters a word, but his soulful eyes and hands-on technical ability envelop him within a protective community who try to keep him from being recaptured by white aliens (one played by Sayles himself, who would perhaps do best to stay behind the camera). It’s a sweet gem with a lot of heart and a small role by actor Herbert Newsome as “Little Earl,” who is possibly the cutest tyke in cinematic history.

Director Alex Cox takes the disparate elements of science fiction, L.A.’s punk scene, the car-repossessing racket, and the coolest intergenerational duo around (Emilio Estevez and Harry Dean Stanton). He serves up a movie of timeless hipness, action, biting humor, and great period music. Estevez, in an early charismatic role, plays Otto Maddox, a punk rock slacker who winds up in the repo biz when desperation claims him. He gets drawn into the invigorating intensity of this dangerous job when Bud (Harry Dean Stanton, in yet another stand-out role) teaches him the ropes. What follows is a wild ride involving drugs, aliens, a wildly overpriced Chevy and decadent romance. A fine film with a stellar soundtrack, grit, and glory.

All hail Paul Rubens, who took his character of manic man-child Pee Wee Herman to the outer limits of massive quirkiness and total hilarity. Tim Burton directed this visual feast in all its Technicolor splendor. “Pee Wee” is a delightful goofball in his trademark shrunken suit, a mask of make-up, crazed laughter, and spirit of endless joy and trust. But when his tricked-out bicycle gets stolen by spoiled man-baby Francis, he embarks on a cross-country trek to reclaim his beloved wheels and wild adventure follows. It’s an inventive, side-splitting movie that celebrates Rube Goldberg machinery, anthropomorphized breakfast, and irrepressible wackiness. Everyone will enjoy this ode to unapologetic nerdiness, which feels as fresh and funny as the day it was released. Remember the Alamo!

Spike Lee’s first “joint” is a delicious endeavor, shot almost entirely in lyrical black and white on a shoestring budget of $175,000. It put Spike on the map and set him up for assured stardom. But unlike his subsequent movies, this intimate piece of cinema has nothing to do with the politics of anything other than sex and romance. Starring Tracy Camilla Johns as beautiful, enigmatic Brooklyn artist Nola Darling, She’s Gotta Have It tells the story of an independent young woman with three devoted suitors. Each has his own defects and charms, and she enjoys them collectively with no need to commit to any one of them. She indulges her healthy sexuality without compunction but things get awkward when the three guys band together to get her to choose one of them. It’s a treatise on male-female relations with some brooding revelations, but keeps a mostly light heart and genuinely hip vibe. From the lovely opening shots of pre-hipster Brooklyn to its innovative roll-out of closing credits, it is a revolutionary pleasure.

Cameron Crowe’s directorial debut is a masterpiece of romantic comedy and one of the most respectful renderings of teenagers in a decade that cranked out films that caricatured adolescents. Released to fine reviews and a healthy box office, its cult status has grown with the years. John Cusack plays lovable lug Lloyd Dobler, just your basic guy with a decent heart and a desire to be a kickboxer. He falls in love with Diane Court (Ione Skye), the class valedictorian; an earnest beauty with an air of gentility who is wildly sheltered by her father. Their romance goes through an unpredictable mill of shifting expectations, parental involvement and the support of straight-talking friends. The ultimate cult moment occurs when Lloyd hoists a boombox over his head as it blares “In Your Eyes,” their shared song, in an attempt to win the woman he adores. It is a joyful and misty ride, sweetly dated in its presentation but timeless in its message. And a gently soaring ending.