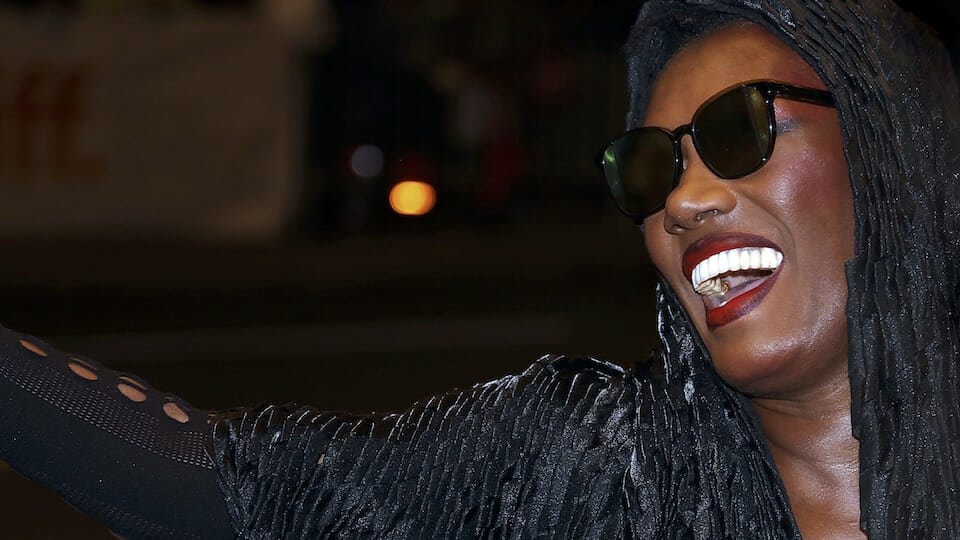 The initial on-screen credit we see in Grace Jones: Bloodlight and Bami reads: “Hats designed by Philip Treacy.” While some might be tempted to overlook this sartorial acknowledgment, it carries the guiding principle of what we’re about to see: that fashion and substance are one in the same for Jones, the singer-actor-model-diva-muse. As well as Jones’ magnificent millinery collection (that we’re treated to throughout the film), what unfolds in Sophie Fiennes’ illuminating documentary about Grace Jones is two hours of tangled, contrasting images, building on one another in fascinating ways. Over the course of the movie, we see sweat-coated concert footage, intimate reunions with family members, steely business transactions, recording-studio frustrations, and an unwavering fidelity to personal expression and effortless glamor.

At 70 years old, Grace Jones remains an ageless icon, a dogged boss of her own image, and an unapologetic iconoclast. Over the course of this doc, we are presented with Grace Jones as the embodiment of a fierce, tireless recording artist as well as a doting grandmother cooing over her new-born grandson. The world of Grace Jones is one constantly in motion and one that is as eclectic as it is unconventional.

Traveling Through Time and Space

We’re given glimpses of the Studio 54 stalwart who transitioned into an ‘80s New Wave diva, never forgetting her fans and never falling into the safety net of nostalgia. We travel with Jones to her homeland of Jamaica, where she’s just as comfortable reminiscing over childhood memories in the company of old relatives and chickens as she is sipping Cristal in her luxury hotel suite. Grace Jones is a lot, and you’d certainly require more than one documentary to fully encompass her greatness.

“Nick Lowe’s Longevity Is Due to Old Magic”

Fiennes is acutely aware of this and doesn’t try to overfill her production. Instead of trying to pack in 70 years worth of biographical material and archival footage into two hours, Fiennes handles Jones’ dynamic legacy with unsentimental candor, untroubled by linear timelines. Fiennes’s work is firmly grounded in the present but in a way that is intimately transparent and aware of its privileged place in Jones’ world.

The camera enjoys all that Grace Jones’ family and stardom offer, but at the same time, is careful not to intrude too far. The camerawork is simple because the abundance of life and color in Jones’ life refutes complicated techniques. It is only the non-chronological storytelling, which creates a dizzying feel to Jones’ equally complex life, that might confound newcomers to the singer’s work. Through this knotted narrative arises a sense of universality, just like Jones herself.

Although Grace Jones is considered an icon, this has come with the price. Seen as an ebony-skinned, otherworldly, androgynous pop-culture figure, Jones’ unrepentant intensity has made her somewhat untouchable. What Fiennes so effectively achieves is bringing humanity to her subject in a way we’ve never before seen. The documentary is a restoration of the star’s realness. Fiennes never tries to put Grace Jones in a box, but instead gives us enough material to observe her as both a human being as well as a performer. We see her in the “bloodlight” of the studio, and in her hometown breaking bread, (“bami”) with her kin.

“Still At It: 5 Movie Directors In Their Eighties”

Through Grace Jones: Bloodlight and Bami, we’re given a vision of a life built on hard work and contradictory strands of experience. When pieced together, it all makes sense because this is Grace Jones, the disco-diva, pinup gladiator whose fluidity of self is as shifting as her style and accents. Fiennes’ beautifully crafted documentary is defiant in its singularity, as is Jones for that matter. Although not a strict portrait of the pop diva, it honors one hell of a talented woman whose strength and influence is as powerful today as it was four decades ago.

0 comments on “The Unapologetic, Magnetic “Grace Jones: Bloodlight and Bami””