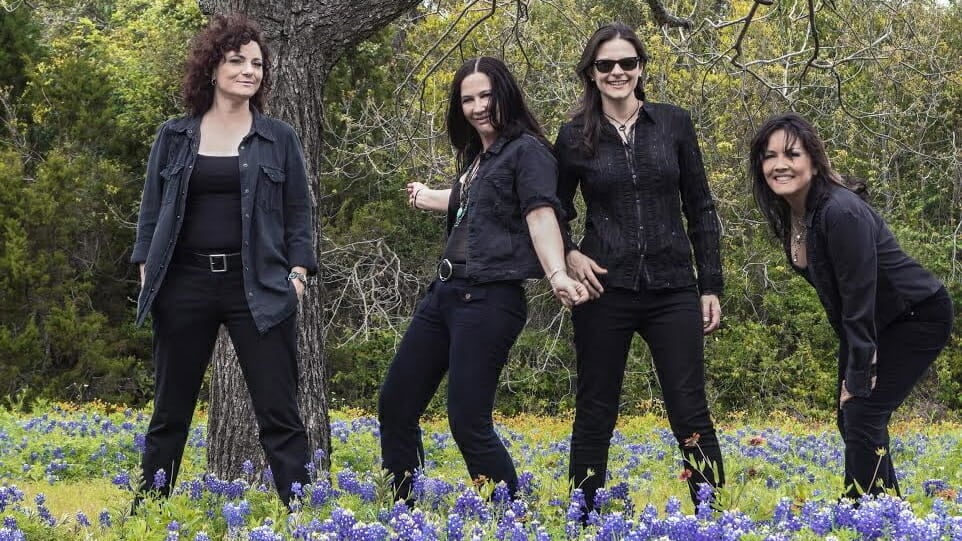 Female musicians have long had a seat at the table of rock. Artists such as Grace Slick, Patti Smith, and Heart’s Ann and Nancy Wilson have held their own with the bad boys and have shown them a thing or two along the way. Joan Jett once commented that although male testosterone initially fueled rock and roll, girls have testosterone too. True enough. But bands that feature all-female lineups make up a short chapter in the encyclopedia of rock n’ roll. And to be clear, we’re talking about bands where the women sing all the vocals and play all the instruments. With that operational definition in place, which bands come to mind? Fanny, The Go-Go’s, The Bangles…So how about The Bluebonnets?

In Austin, The Bluebonnets are keeping the all-girl group tradition alive. Borrowing their name from the Texas state flower, The Bluebonnets play driving rock with power vocals and roaring guitar licks. The only thing “dainty” about their music may be their name. The core of the band, and the longest-tenured members, guitarist Kathy Valentine and bassist/lead vocalist Dominique Davalos, are no strangers to the business either. Valentine plays bass in the most successful all-girl band in rock history: The Go-Gos. As a member of that group, she was the last piece of the puzzle and helped send the band to superstardom. As a member of The Bluebonnets, she traded in her bass for a guitar, then called Davalos, a California native who grew up playing music in a family of entertainers. Her father, Richard Davalos, acted alongside James Dean in East of Eden; The Smiths used his image on the cover of their album Strangeways, Here We Come. Her mother, Ellen van der Hoeven, danced for Martha Graham’s company. (Graham referred to her as “her jewel from the east.”)

Like so many rock bands, The Bluebonnets’ sharpened their sound by playing the blues. Early on, the band learned blues covers off cassettes that Jimmie Vaughan would send them in the mail. Based out of Los Angeles at the time, gigs came quickly. But the band knew that to take their music to the next level would require increased songwriting prowess and a raunchier sound on guitar. That happened when the band relocated to Austin and added Eve Monsees to the lineup. Monsees, an Austin native, brought the musical edge The Bluebonnets needed to evolve into what the band is today. Monsees learned guitar alongside her childhood friend Gary Clark, Jr. who credits her with drawing him into the world of music. Drummers Kristy McInnis and Christina Comley round out the lineup and are both featured on The Bluebonnets’ latest winning release, 2017’s Tonewrecker.

Tonewrecker, the band’s third album, was recorded and produced in Austin by Chris “Frenchie” Smith (Fastball, Jet, The Toadies). Valentine and Davalos, co-writers on every track but one, infuse an “LA sound” seamlessly with Monsees’ “Austin blues” guitar and add some up-tempo Ramone’s feel in for good measure. The results shoot straight out of the gate on the album’s first two tracks, “Why Ya Don’t” and “15 Minutes From 1965”. It’s “turn up your car radio” rock n’ roll. Davalos power shreds vocals throughout the record, but perhaps even more so on “Don’t Walk, Run” which may be the record’s best track.

Also worth singling out is “Make Me Shake,” for which Valentine takes over on lead vocals and delivers a lyrical sex-romp that would have played nicely in NYC’s famed CBGB nightclub. In an industry that has had more #MeToo moments than we’ll ever know, The Bluebonnets are sexy on their terms and play whatever they damn well want to play. That’s how rock n’ roll works, right? If you’re looking for outside endorsements, Mike Scott, the lead singer, and guitarist of The Waterboys is as good as it gets. Scott took in a set at Austin’s famed SXSW music festival and was jelly-legged. He promptly invited the band to open for him on the American leg of his 2015 tour. They were a smash. The Bluebonnets are reminding rock fans not to overlook the ladies. And hopefully, little girl rockers from all over will become inspired enough to blossom into the future stars that the music will need to keep rock rolling for decades to come.

Photo Credit: The Bluebonnets by Sandra Dahdah, courtesy of the band

0 comments on “The Bluebonnets: All-Girl Band Blooms in Texas”