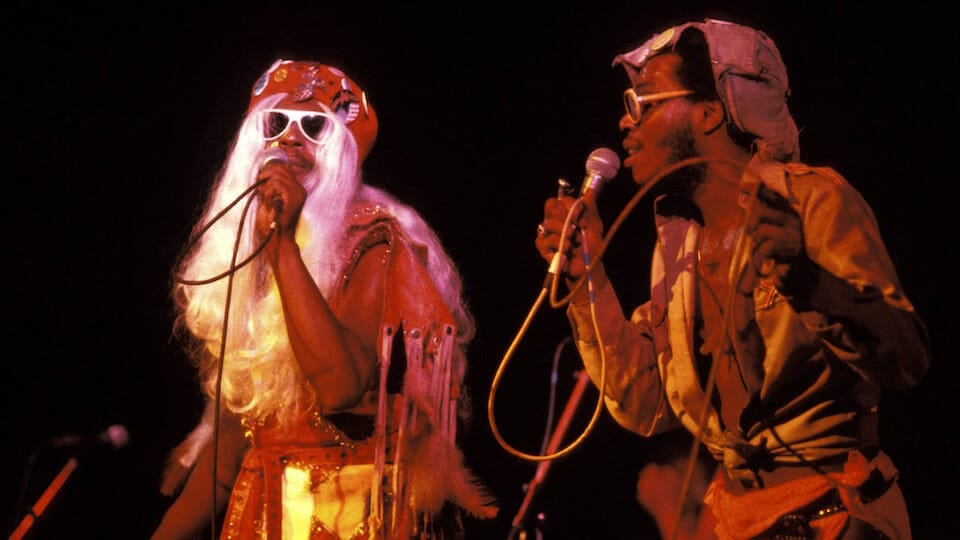 Much has been written about the live extravaganzas that define the Parliament-Funkadelic stage show. A spectacular showcase defined by large-scale flying saucers, cosmic Cadillacs, giant flashlights, futuristic costumes, bandleaders coming out of coffins, and so on. But what these brothers and sistahs lay down vocally and instrumentally is what blows the cobwebs out of our minds. What follows is a selective discography honoring P-Funk’s greatest live performances. Believe… and Funk is its own reward!

The very first officially released live recording by Parliament-Funkadelic was originally meant to be two separate double-albums: one live double-album for Parliament, and one for Funkadelic. The album was recorded at two separate venues: the L.A. Forum on Jan. 19, 1977 and the Oakland Coliseum on Jan. 21. While the album was rushed out to capitalize on the growing success of the band, no real detail was paid to the album’s sound quality. Regardless, the performances showcase a musical collective at the height of their intergalactic powers. The Beatle-esque type screams featured on “Dr. Funkenstein” alone would make the hairs on the back of any neck stand at attention. An added bonus came in the form of a poster of George in the Dr. Funkenstein gear and an iron-on transfer bearing the phrase “TAKE FUNK TO HEAVEN IN ’77.”

Kickstarting the summer of 1986, this release features P-Funk near the start of the Mothership Connection Earth Tour. It was recorded at the Summit in Houston, Texas on Halloween 1976. The performance was issued on vinyl, audio cassette, and a heavily edited VHS cassette. The vinyl version features four live tracks on Side A and three studio tracks on Side B. The VHS features twenty minutes of the performance, as well as three George Clinton music videos: “Atomic Dog,” “Double Oh Oh” and “Bullet Proof.” This particular release proved so enduring that in 1998, the entire performance was released on DVD under the title George Clinton: The Mothership Connection.

Staying within the era of the Mothership Connection Earth Tour, this stunning live performance was done at the McNichols Sports Arena on Feb. 5, 1977 (not 1976 as the album suggests). You couldn’t have a crazier line-up for a concert than P-Funk, Bootsy’s Rubber Band, and Santana. The standout moments from this gig are “Do That Stuff,” “Let’s Take It to the Stage” and “Red Hot Momma”.

Perhaps the most ambitious archival project ever embarked upon by the P-Funk organization, the original idea was that you needed to purchase all three sets to hear any one particular gig in its entirety. For example, two of the sets give you the complete concert at D.C.’s Howard Theatre while the Japanese release features only a fraction of a 1972 performance at Boston’s Sugar Shack whose other parts are on the other two sets. Not that a completist would get everything either. Some releases give only a part of a performance that no other set provides, like the concert at Louisiana’s Monroe Civic Center on the UK set. All sets contain four CDs. The UK set features a fold-out history of P-Funk, while the Japanese set features a 1994 calendar with the birthdays of all of the members of P-Funk marked off.

How strange is it that the first official live release by the most successful P-Funk spin-off act didn’t emerge until 1995? It was definitely worth the wait, however, as the set features a mix of Rubber Band classics like “Stretchin’ Out,” and “Bootzilla” as well as P-Funk jams like “One Nation Under a Groove” and “P-Funk.” Keepin’ Dah Funk “Alive” also benefits from a killer musical line-up that includes vocalist Bone Cooper and P-Funk keyboardist Bernie Worrell. The P-Vine release features a color poster of bandleader Bootsy Collins.

Recorded at Hangar E at Stewart Airfield, this live album was released by P-Vine Records in Japan on Dec. 25, 1995. But take note: One song recorded during the rehearsal, “Cosmic Slop,” was initially released in 1976 on the Funkadelic album Hardcore Jollies. Another rehearsal recording, “Tear the Roof Off the Sucker Medley,” was released in 1977 on the Parliament album Live: P-Funk Earth Tour bolstered by canned audience responses. These two tracks are not included on the MCNB album. The two songs in the final track — “Maggot Brain”/”Good To Your Earhole” — were recorded during the 1993 P-Funk All-Stars concert in Japan. The album was later reissued in 2017 under the erroneous title Live…Madison Square Garden 1977. MCNB features the only live version (to date) of the track “Gettin’ to Know You” which was originally featured on the album The Clones of Dr. Funkenstein.

2 comments on “Let’s Take It to the Stage: P-Funk’s Live Discography”