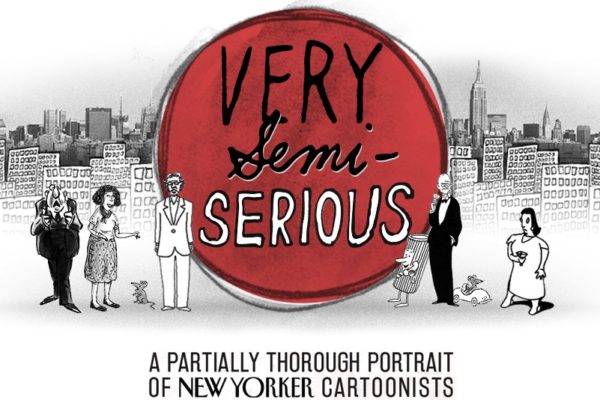 Some comedy aims low and broad, hoping for big, easy laughs. There’s always a place for a good gag: the pie in the face, the shot in the groin, any of the Hangover movies. (If you know the answer to the cinematic question “What do you make of this?” we are kindred spirits.) Then there are the cartoons in The New Yorker. Wry. Brainy. Literate. And nearly impossible to get published. The recent HBO documentary, Very Semi-Serious: A Partially Thorough Portrait of New Yorker Cartoonists, offers an illuminating, entertaining glimpse into the people and process behind these legendary scribblings.

Director Leah Wolchok hangs the story around the magazine’s cartoon editor, Bob Mankoff, interspersed with profiles of several prominent cartoonists. As you’d expect, this a thoughtful, highly verbal bunch – unusually good at describing their process. Among other things, it’s surprisingly suspenseful to see how cartoons go through the approval process. Mankoff’s meeting with editor in chief David Remnick, even with its hints of stage management, is intriguing.

Mankoff is an excellent guide throughout. He has thought carefully about the subject, of course, and brings a classic, Woody Allen-ish vibe to his explanations both of The New Yorker and of his theories of humor in general.

It’s generally worthwhile to spend to spend time with highly intelligent people pursuing something they do really, really well. You’ll get that feeling from this film, with bonus guffaws throughout.

PS. Documentary fans many enjoy several of our other posts including These Guys Were REALLY Behind the Music, on unheralded studio bands, Becoming Michael Jackson, on Spike Lee’s latest, and With The Beatles, from the Beginning, which profiles a mostly-unknown member of their inner circle.