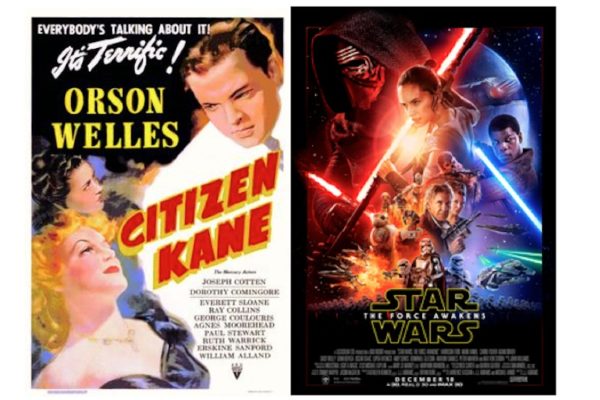 As part of the generation that remembers standing in line for – and having my imagination broadened by – the original Star Wars, I knew going in that my reaction to The Force Awakens would be anything but indifference. The unexpected part, which took some time to put into perspective, was that the new movie initially brought to mind a particular quote by the late Pauline Kael. “A shallow masterpiece” was part of the legendary critic’s somewhat contentious assessment of the even more legendary movie Citizen Kane.

Kael’s usage of the phrase conveyed the view that, while she considered Citizen Kane a great movie, its cinematic sound and fury ultimately signified very little (and what little it did signify owed much more to co-writer Herman Mankiewicz than to Orson Welles). In a similar spirit, my embrace of the phrase was a convenient shorthand for my initial feeling that, for all its merits, The Force Awakens was as safe and conventional as could be.

[amazon template=left aligned image&asin=B006CEKZ4Y]While I agree with Kael that Citizen Kane is a great movie, I don’t feel the need to offer caveats to my assessment. The film remains a joy because it’s hugely entertaining and never lets technique or showmanship get in the way of telling a very human story about coming to grips with history and destiny. Reflecting on this made me consider that The Force Awakens actually displays some thematic kinship with Welles’ film.

Both are animated by a quest to understand – and indeed reclaim – the past. Like Thompson, the reporter in Citizen Kane trying to uncover the meaning of a legendary figure’s final words, Rey in The Force Awakens finds herself on a journey that brings her face to face with people she had always believed to be just legends. Though it trades jumps in time for jumps through hyperspace, the net effect is much the same. Virtually everyone Rey encounters – whether good or evil – is somehow struggling with the events of decades past.

For her part, Rey fares a bit better at the end of the movie than Thompson. Unlike the reporter, who’s left to speculate what Charles Foster Kane’s dying words meant, Rey gets the chance to meet the past – personified by a silent Luke Skywalker – whose secrets will have to wait. Whether they end with a deliberate enigma or an open-ended question, perhaps the mark of a “shallow masterpiece” is an ability to leave one wanting more.

Photo Credit: Fair use images of posters from Citizen Kane and The Force Awakens

[amazon template=right aligned image&asin=B015AJOKFG]PS. For another take on the newest Star Wars installment, check out our post A Little Film You May Not Have Noticed. Plus, when you sign up for our weekly email update, you’ll also get the inspiring documentary The 5 Keys to Mastery — FREE. Learn the traits that help people achieve their dreams: from superstar musicians like Carlos Santana and BB King, to Olympic gold medalists, a Nobel laureate, entrepreneurs, actors, teachers and more.

0 comments on “The Citizen Kane of Star Wars Movies”