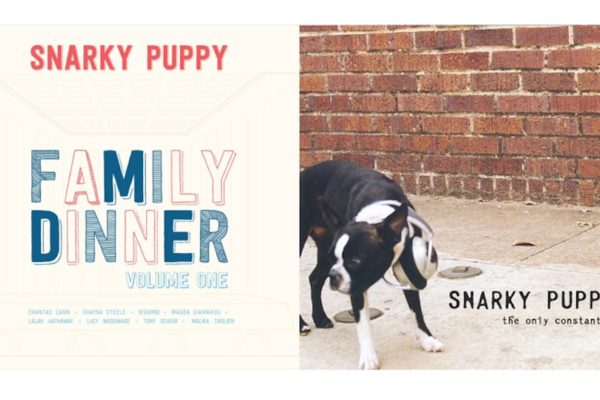 Calling Snarky Puppy a jazz band is like calling Leonardo da Vinci a painter. Snarky’s music is equal parts jazz, soul, rock, fusion, and even classical sprinkled with a healthy dose of ethnic instrumentation. The band is a collective made up of nearly 40 musicians led by Grammy Award-winning bassist, composer and producer Michael League. Their albums and concerts consistently receive rave reviews and awards, including a Grammy Award in 2014 for Best R&B Performance and another this year for Best Contemporary Instrumental Album.

Family Dinner, Volume Two is filled with heartfelt vocals and breathtaking musicianship. Special moments abound. “Sing to the moon, and the stars will shine,” sing UK vocalist Laura Mvula and Canadian vocalist Michelle Willis on the anthemic “Sing To The Moon.” A chorus of flugelhorns and a pump organ leads into three keyboard solos on a Moog synthesizer, a B3 and a piano, respectively. When the brass section returns and the band kicks in, the joy of the performance is palpable.

“I Remember,” performed by LA electro-pop duo KNOWER and woodwind virtuoso Jeff Coffin, features an intense duo between saxophones and drums/percussion. KNOWER also takes the lead on a bonus track, “One Hope,” that could have come off of a speed metal album. Somehow, these songs fit perfectly with the other unique and creative pairings throughout the album.

Volume Two closes with one of the most moving songs David Crosby has written in his long career, “Somebody Home.” According to Crosby, it was written as part of his “longest sustained writing surge in thirty years.” Crosby delivers a haunting vocal accompanied by his acoustic guitar. Other musicians layer in as the song builds in intensity. You wouldn’t think of David Crosby as a jazz singer, but his song and performance work beautifully thanks to Michael League’s arrangement.

Snarky Puppy is a band worth following, and Family Dinner, Volume Two is a CD worth buying. And you should buy it — not stream it — since it comes with a DVD showing the performances of the eight songs on the album plus five bonus tracks. It is sure to be the most fun you can have at a family dinner.

PS. For other albums you won’t want to miss, check out this comprehensive list of the “best of” music in 2015. And talk about a massive collaboration. You won’t be able to watch this rendition of the Beach Boys’ “God Only Knows” just once!

0 comments on “A Different Type of Family Dinner”