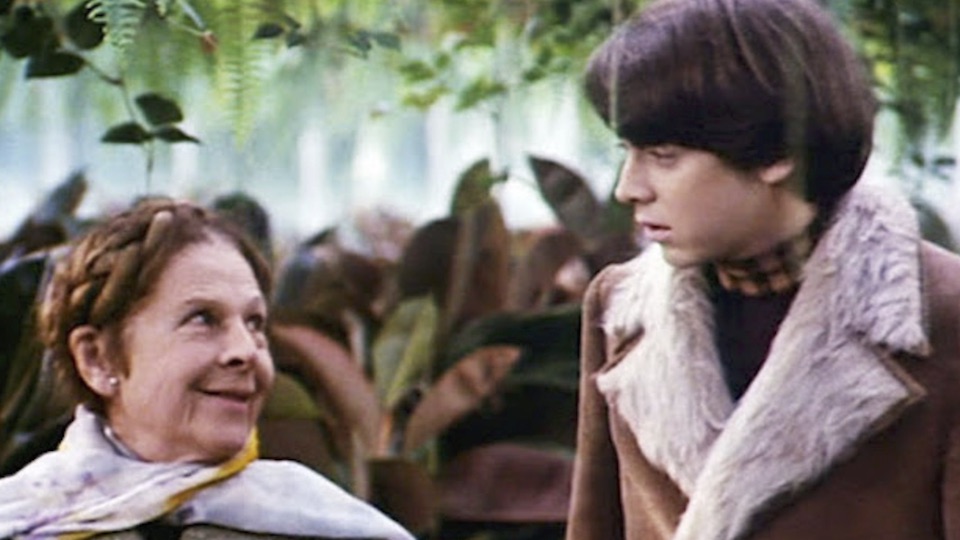 Few films illustrate the term “cult movie” more definitively than Harold and Maude. Director Hal Ashby’s offbeat love story wasn’t very successful when it was originally released in 1971, but the movie has gained a devoted group of admirers and fans over the years and influenced filmmakers like Wes Anderson and David O. Russell. The film tells the story of Harold (played by Bud Cort), a young man who is obsessed with death. He stages elaborate fake suicides to gain the attention of his clueless mother, who thinks the answer to his issues could be that he needs to meet a nice girl.

While her attempts to fix Harold up go catastrophically awry, Harold does eventually meet that nice girl…. at a funeral. Ruth Gordon plays Maude, a woman in her late 70s who’s nothing less than a force of nature. She’s as obsessed with life as Harold is with death. Their relationship, and the things Harold learns from her about living in the moment, are at the heart of this quirky and appealing story.

If you haven’t seen Harold and Maude before, you’re probably thinking that fake suicides, the ultimate May-December relationship, and philosophical discussions about life and death don’t really sound like a recipe for a romantic comedy. Harold and Maude isn’t your run-of-the-mill love story, but that’s part of what makes it so unique and special. The highly original, insightful screenplay by Colin Higgins (who went on to write Silver Streak and Foul Play) features several deeply moving scenes, as well as a few laugh-out-loud moments. Bud Cort and Ruth Gordon give brilliant performances. They truly inhabit their characters. Ashby’s strong direction does an excellent job balancing the lighter aspects of the story with its darker shadings.

The other feature of Harold and Maude that contributes immeasurably to its success is the music by Cat Stevens. After Elton John turned down the chance to work on the film, Stevens was approached to contribute music to the soundtrack. The singer-songwriter had recently scored a hit in the US with his album Tea for the Tillerman. Stevens composed two songs for Harold and Maude, “Don’t Be Shy” and “If You Want To Sing Out, Sing Out,” which Ruth Gordon performs in a memorable scene during the film.

Other songs recorded and released earlier by Stevens, including “Where Do The Children Play?” and “Miles From Nowhere” are also featured in the film. You’d swear the songs were written expressly for the movie since powerful numbers such as “Trouble” effectively complement the scenes they accompany. His songs add background, color, and atmosphere to Harold and Maude.

While the songs from the movie have been included on various Cat Stevens albums and compilations, the only official version of the soundtrack issued in the US was on vinyl in 2007. This year, for Record Store Day, a new edition of the soundtrack will be released, which will feature the songs used in the film, accompanied by bits of dialogue from the movie. The soundtrack to Harold and Maude comes out on June 12, which is the first of two Record Store Days in 2021, the other being July 17. You can get more info by following this link: https://recordstoreday.com. The music of Cat Stevens is just one of the elements that make seeing Harold and Maude an unforgettable experience.