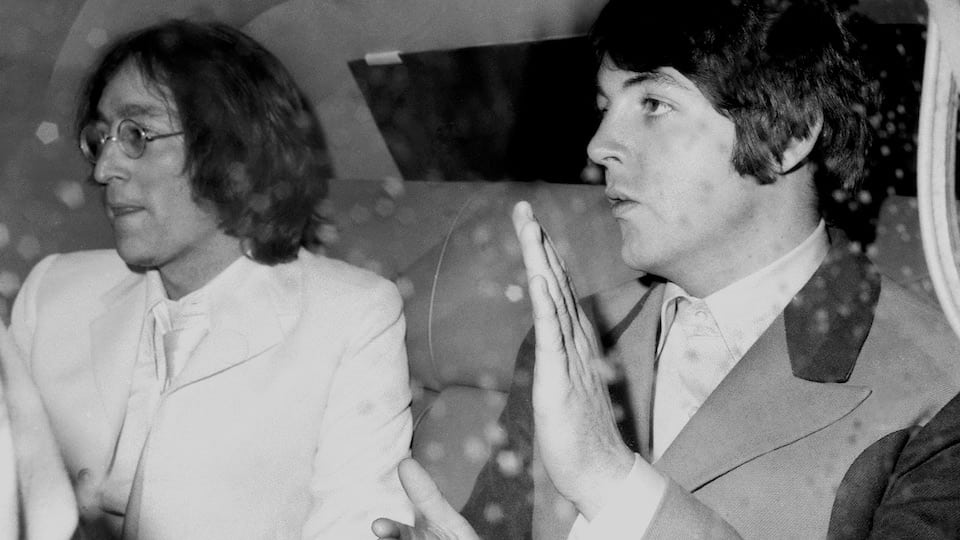 The events depicted in Chicago 7, currently streaming on Netflix, coincided with the release of “Hey Jude” and “Revolution.” This excerpt from Candy Leonard’s Beatleness: How the Beatles and Their Fans Remade the World, looks at the violence in Chicago through the eyes of fans and shows how music and politics were intertwined in 1968.

“Hey Jude” and “Revolution” —the first Beatles single with a Granny Smith apple on the label instead of the familiar orange-and-yellow swirl—was released on August 26, 1968.These new Beatle songs seemed to be commenting on a violent year, up to and including the riots occurring on the streets of Chicago at the moment of their release:

I didn’t want to watch the Democratic convention because it seemed extremely boring, just a bunch of old fart windbags droning on. The next thing I knew, the riots in Chicago were on every channel! A lot of the kids getting their heads bashed in by the police looked like they weren’t much older than I was. It was pretty upsetting to watch. (Female, b. ’51)

I used to watch the conventions gavel-to-gavel and Chicago was no exception, so I saw all that was going on, both inside the hall and on Michigan Avenue and in Grant Park. It absolutely outraged me and, in fact, still does. By the end of things on the final night, I was almost physically ill. It was hard to believe this was happening in my country. (Male, b. ’49)

For young fans watching the bloody chaos of Chicago, “Hey Jude” was encouraging and optimistic. The intimacy of Paul’s voice was comforting— instilling confidence and offering advice, as if prepping the listener for an important mission. A male fan, age sixteen at the time, remembers, “It was an amazing song that made you feel good.” Another recalls: “Hey Jude” was the best song they ever did; it’s saying don’t be so down, keep your head up, it’s good to be alive.

For another male fan, age fifteen at the time, the song is inextricably linked with the war: “A boy on our street was killed in Vietnam, and a group of us watched as military people pulled up in a car, got out, and knocked on the door to tell his mother. We had a radio with us, and ‘Hey Jude’ was playing. I remember that day every time I hear the song.”

“Revolution” was the first Beatles song that directly responded to world events. And, more importantly, it spoke directly to fans about what was happening in their lives. Lennon had been watching the bloody unfolding of 1968 from the banks of the Ganges, and now it was time to say something.

Fans listening to the lyrics heard the Beatles aligning themselves with the mission of “changing the world”—clearly on young peoples’ side. The message for these fans was that social change is complicated, serious business. Though no “real solutions” or answers were offered, this trusted and beloved commentator was telling them it’s going to be “all right.”

Radicalized older fans and other observers on the left found the song simplistic and naive, especially in light of growing opposition to the war falling on deaf ears, and the excessive use of force just used against protestors on the streets of Chicago.

The violence around the Democratic convention was a sharp contrast to the previous year’s Summer of Love. A female fan, age twelve at the time, recalls, “My parents were watching it, saying how awful it was. I went over to take a look. I thought something must have gone terribly wrong. It made me uneasy to see real violence like that.” Everyone wondered how it came to this.

According to Tom Hayden, there was a realization in late 1967 that “the establishment does not listen to public opinion” and that “available channels have been tried and discovered meaningless.” The body count was escalating along with the war. Oblivious to the seething anger felt by young men who couldn’t vote but were forced to be cannon fodder in an unjust and unwinnable war, the establishment dismissed protestors as naïve, spoiled, and rude.

The only viable peace candidate was assassinated. Volunteers who faithfully “worked within the system” for Kennedy and McCarthy were outraged that the party machine nominated the uninspiring Hubert Humphrey and rejected the peace plank—ignoring the fact that 80 percent of primary voters had voted for an antiwar candidate. Young people were wondering what happened to our democracy.

Protest organizers, a coalition that included the SDS, the national Mobilization Committee to End the War in Vietnam, and Yippies— Abbie Hoffman and Jerry Rubin’s effort to politicize hippies through the use of street theater—were not planning violent protests but “were determined, at the least, not to be intimidated.” There was an enormous amount of anger amid the theater.

Law enforcement outnumbered demonstrators four to one, and included twelve thousand Chicago police with “shoot to kill” orders. One in six demonstrators was actually a government agent of some kind, often acting to incite what an in-depth study concluded was a “police riot.”