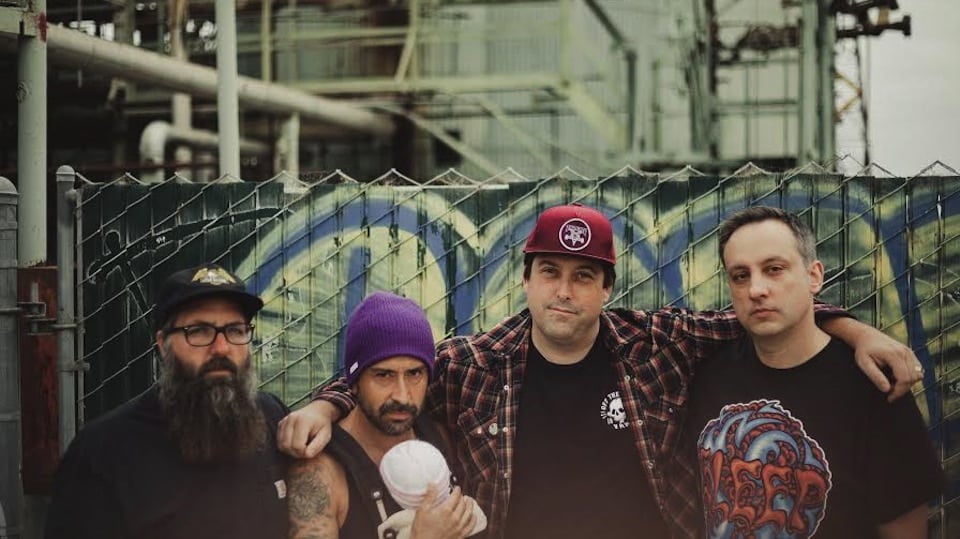 Punk rock and fatherhood are no longer an anomaly. Far from it. For proof look no further than Andrea Blaugrund’s 2011 documentary on the topic, The Other F Word, which includes interviews with Pennywise’s Jim Lindberg, Blink-182’s Mark Hoppus, and Total Chaos’ Rob Chaos among many others. So when you think about it, the arrival of Dad Brains — a quartet of punk rockers who each have kids themselves — seems long overdue. Well, good things come to those who wait because these guys aren’t just funny, they also rock pretty hard. Lead singer Pat Pedraza shares the details in our interview below in anticipation of their self-titled EP which comes out courtesy of Pirate Press Records on Fri., Sep. 14.

Q: How did Dad Brains come to be? Who’s the mastermind behind it?

A: After my daughter was born last year, I didn’t realize how challenging it was going to be. I was tired, a little stressed. I would have songs and melodies in my head, so I said, maybe I can get some of these emotions out and start a hardcore band that would make people smile and wanna mosh. I called up my old buddy Matt, and the rest is history. Masterminds… Kinda? Me and Matt. Haha.

Q: Have your bandmates from No Motiv, Creep Division, and the F-ing Wrath come to see Dad Brains play? What’s been the reaction from the punk rock community?

A: Um, we haven’t even played a real show yet haha. Our first show will be at Salzer’s Records in Ventura in Sept. So far, people are diggin the tunes. I’m more stoked that my 10 month old daughter smiles and goes crazy when she hears “I’m Old.” Seriously, she does. I have video.

Q: Would you play a birthday party? Will you be touring to support the EP?

A: We would play a birthday party! We’re actually gonna play a local bowling alley in November and a Toys for Tots show at The Viper Room in December! Kids will need earplugs though. Safety first! Probably no crazy touring since we are all married with jobs! Look out for some weekend shows though. I can’t be home too late either, when I walk in the house late, my dog starts barking and I wake up the baby. My wife gets mad sometimes.

Related: “Will The True Godfather of Punk Please Take A Stage-Dive?”

Q: There’s something hilarious about hearing you rock out lines like “quiet time” and “It’s not my imagination. I’ve got a pain in my back.” Were there any lyrics you didn’t use because you thought “That’s too silly”?

A: Rad! Thanks! No, mostly every silly lyric that came to my mind at recording time, I used. “Quiet Time” is a real part of having a newborn. Haha. All the songs are pretty silly but are actually really happening to me. I do have pains in my back, especially chasing my daughter around.

Q: If your band was going to cover a Bad Brains song, which one would it be?

A: It would be “Attitude” but we’re gonna to change it to PMD. Positive-Mental-Dadditude. We might do it at our first show.

Q: What’s been the reaction from your own kids?

A: When my daughter hears the mosh beat on the drums and the guitar palm muting, she goes crazy. I get stoked… Matt, John, and Craig’s kids were in our “I’m Old” Video. They were pumped.

Q: Who are you listening to now yourself?

A: Honestly, I don’t really know what’s going on in music these days. I’m all over the place. I have a go-to CD in my car. It’s from the ‘80s movie Return of the Living Dead. It’s the ultimate punk rock movie soundtrack. For some weird reason lately, I’ve been on a Neurosis kick. I hope that ends soon though. I get scared easy.