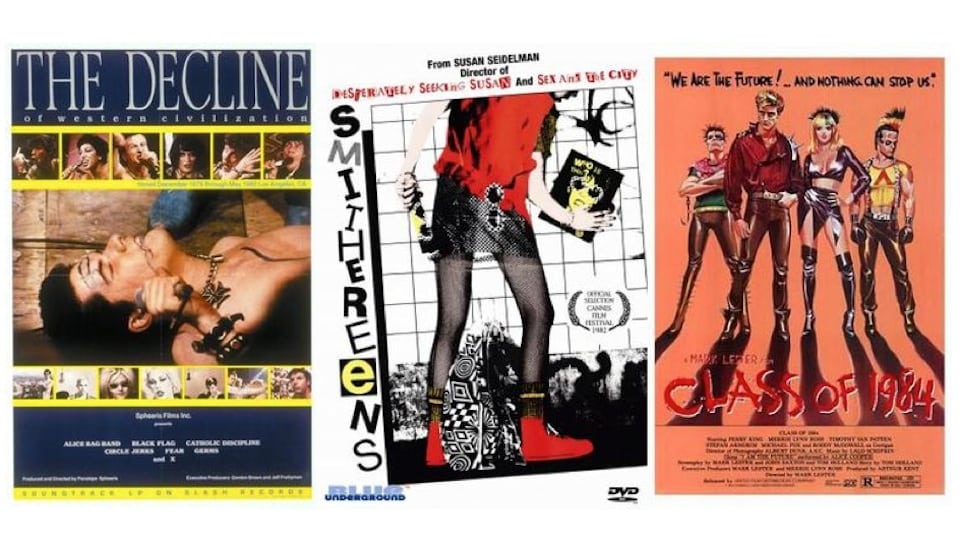 When your significant other makes a punk rock horror movie like The Ranger, you spend a lot of time talking about punk rock and punk movies with her crew. You chat with her co-screenwriter about how punks talk, and with the certified badass producer about how punks look—and why so many of them want to look like Travis Bickle. If things go really well, her movie gets into a bunch of great festivals, so you get to travel to places like Austin, Chattanooga, Philadelphia, and Boston, where you get to compare favorites with more filmmakers, critics, musicians, and fans. I am lucky enough to have done all this — with the festival badges and drunken karaoke pics to prove it — and can now share our list of essential punk rock films.

Jubilee stands as the first and, for some, the best (or at least most) punk film ever made — Vivienne Westwood’s dissent notwithstanding. The movie tells the story of a time-traveling Queen Elizabeth sent to a dystopian, near-future Britain where violent girl gangs run unchecked and… you know what? This plot defies description. It’s meandering and flirts with being both too artsy and too crass. Yet if you’re tuned to its frequency, it’s nothing short of brilliant. On the soundtrack: Adam Ant, Wayne County, Chelsea, Siouxsie and the Banshees, Brian Eno.

This British film charts the professional rise and personal fall of a band destroyed by success. Yes, by 1980, punk was already at risk of losing its anti-authority authenticity by selling out to Big Music. The Ranger producer Heather Buckley turned me on to this one, explaining “you come for Hazel O’ Conner’s powerhouse performance in her punk rock war paint; you stay for the dystonic, glam-Tron ending.” She’s right. On the soundtrack: Songs written and performed by the film’s star, Hazel O’Connor.

Penelope Spheeris is one of two filmmakers who are synonymous with punk rock cinema, capturing images that helped define it throughout the VHS era. Her debut, the definitive documentary on LA punk circa 1979-80, is a favorite of The Ranger co-writer Giaco Furino. “It’s one of the most raw, real, and exciting portrayals of a punk scene ever committed to film. It perfectly straddles the line between being a peek behind the curtain of the squatter lives of punks and being a totally killer concert film.” On the soundtrack: Black Flag, Circle Jerks, Fear, Germs, X.

This campy, cult thriller is the perfect distillation of Reagan-era punk paranoia, set in an inner-city high school terrorized by violent, amoral teens. The pic was an inspiration for Jenn Wexler, director of The Ranger. “I’m in love with Class of 1984. It goes to dark and brutal places, while still being colorful and hilarious. Of course, I would want to be friends with the punks at Lincoln High.” On the soundtrack: Alice Cooper, Fear, Teenage Head.

5. Ladies and Gentlemen the Fabulous Stains (1982)

An ode to adolescent female rage, LAGTFS zeroes in on a novice all-girl band who become an overnight media sensation—more for the look and attitude of their lead singer than for any obvious musical ability. Teenagers Diane Lane and Laura Dern star as members of the titular Stains, and a greased-up Ray Winstone is featured as the lead singer of The Looters, performing alongside former members of The Clash and Sex Pistols. On the soundtrack: The Professionals, plus original songs by the film’s fictitious bands.

NYC was the birthplace of punk rock (specifically: CBGBs, 1973) but by the early ’80s it had moved on to L.A. Smithereens is the story of a young, wannabe punk groupie who gets to the Big Apple too late and tries to beg, borrow, or steal a way out West. The film is a time capsule of east coast punk whose authenticity is enhanced by the presence of actual rocker and trendsetter Richard Hell in a lead role. It’s a favorite of Ranger star Chloe Levine. “I wasn’t around for the East Village punk scene, but Smithereens makes me wish I was.” On the soundtrack: The Feelies, Richard Hell & The Voidoids.

For her second feature, Spheeris wrote and directed this fictional story of runaway kids living on the margins of society. Realizing it would be easier to teach a punk to act than an actor to be authentically punk, Spheeris cast mostly non-professional fans and musicians (including a young Flea, pre-Red Hot Chili Peppers) thereby providing a rare, authentic look at the punk attitude and lifestyle. Spheeris returned to punk culture in future films, including the 1987 comedy Dudes and a third Decline doc in 1998. On the soundtrack: D.I, T.S.O.L, The Vandals.

If Spheeris is the mother of punk rock cinema, Alex Cox is its father. Repo Man, the story of a young punk (Emilio Estevez) taken under the wing of a car repossessor (Harry Dean Stanton), offers a thematic mash-up of ‘50s sci-fi, ‘60s counterculture, ‘70s paranoia, and ‘80s punk. It shouldn’t work, but it does. As Samantha Hawkins, costume designer for The Ranger, notes, “what’s better than punks meets aliens and government conspiracies? Also, sequin tuxes. Always sequin tuxes.” On the soundtrack: Iggy Pop, Suicidal Tendencies, The Plugz, Circle Jerks, Fear.

The kids in Return… are, without question, the kind of faux Hollywood punks that Spheeris fought to keep out of her movies, but in the context of Dan O’Bannon’s influential zombie comedy, they’re perfect. Suicide, Trash, and the gang may not have been accurate representations of mid-‘80s punks, but their obnoxious attitudes and bright gear made them role models for generations to come. On the soundtrack: The Cramps, 45 Grave, The Flesh Eaters, The Damned, T.S.O.L.

Following the cult success of Repo Man, Cox returned to punk but with a darker, more serious tale: the true story of the destructive relationship of Sex Pistols bass player, Sid Vicious (Gary Oldman), and his girlfriend, Nancy Spungen (Chloe Webb). As The Ranger’s Buckley told me, Sid & Nancy “is colorful, wild and everything I wanted as a 13-year-old punk girl. Whenever I feel the sentiments of love, I think of the scene with Sid and Nancy in the alley while the trash falls.” On the soundtrack: The Pogues, Joe Strummer (of The Clash), Oldman singing “My Way,” and no actual Sex Pistol songs whatsoever.

Photo Credit: Fair use images of posters of The Decline of Western Civilization, Smithereens, and Class of 1984.