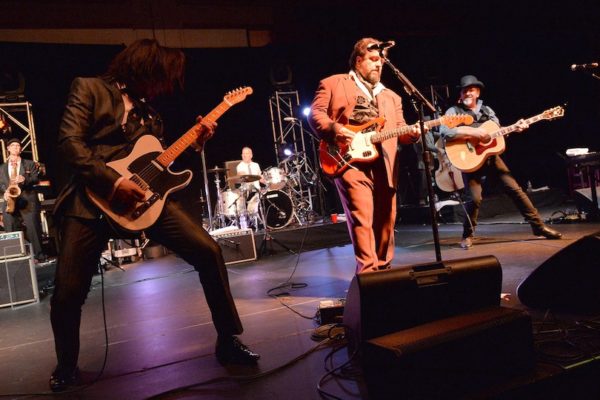 I’ve heard recorded music from The Mavericks for years. Always fun, always listenable. But I never dug into the band enough to go see them. That changed the other weekend when a pal invited me to the third and final performance from The Mavericks at Tarrytown Music Hall, just down the road from the Halloween-infused hamlet of Sleepy Hollow. The third night was added after the first two shows sold out in nanoseconds. Lucky me. Right off the bat it was clear this show would be different. The pre-show sound track wandered all over the musical landscape but Mavericks die-hards (and there are a lot) would recognize the variety as characteristic of the group’s universal musical tastes and interests. The second difference was the number of women in the audience – around half and half, a high proportion for rock concerts these days. The reason would soon be clear.

The November 1st performance brought down the house. An incredibly tight band playing an eclectic mix of largely up-tempo tunes with energy, commitment and a consistent sense of fun. With each new tune upping the ante on danceability, the front of the house was swarmed by the third song and within ten more minutes the entire theater was on its feet. There was simply no stopping the cascade of fun.

Fronted by Raul Malo, who also has a significant solo career, the ‘core four’ of the Mavericks incorporates blistering lead guitarist Eddie Perez, the energetic Paul Deakin on drums and the colorful Jerry Dale McFadden on piano and organ. The band is brilliantly rounded out with double bass, sax, trumpet and extraordinary work on the button accordion from Michael Guerra.

Where to begin on the music? It ranged from Mavericks classics to a Malo acoustic solo rendition of Willy Nelson’s “Blue Eyes Crying in the Rain”. Rockabilly. Texicano.

A Bob Wills influence was frequently in evidence. There were merengue, rumba and ska rhythms. And the night’s most interesting cocktail was a reggae-inflected cover of the Four Tops’ “Reach Out – I’ll Be There”. (Check out other inventive pairings, like Guantanamera > Twist and Shout. )

These guys are on stage to have a good time. And for a long time. They played nearly three non-stop hours. After a generous initial set, the audience enticed Malo back on stage for two acoustic songs. But the night was young and the entire band soon rejoined him with seven encore songs.

Each better than the last and the old Music Hall was rocking. Malo explained the encore set, saying they’d enjoyed the weekend in Tarrytown: “After all, this is our last show here. Let’s have some more fun.”

Click here for information on the next Mavericks tour.