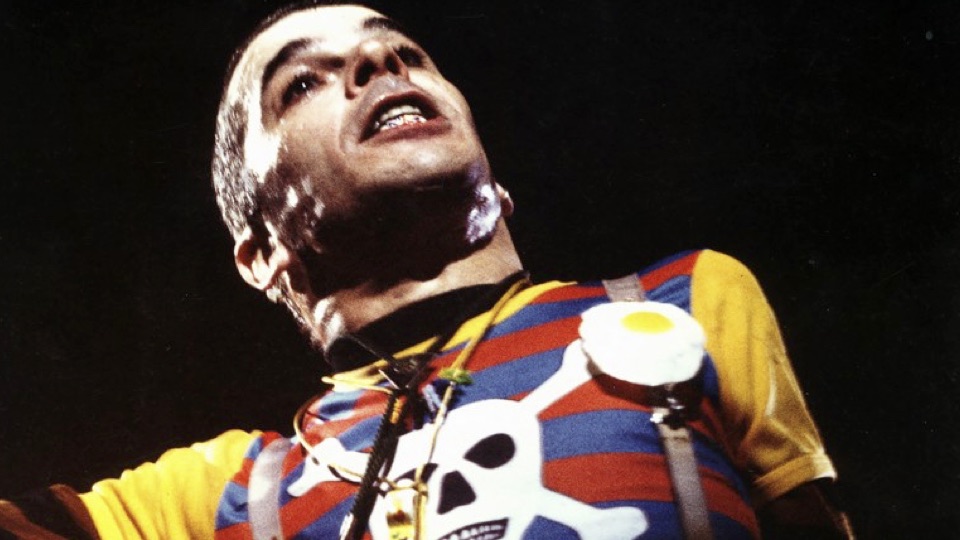 Ian Dury, who is barely known outside of his native land of England, was one bloke who could turn a phrase.  But the one phrase Ian is believed to have coined (and the title of his minor 1977 hit single) is used so much, it’s now considered a cliché:

His pianist and co-writer, Chaz Jankel regrets: “I wish we’d trademarked the actual phrase.  Imagine how much it would have been worth today!”

The song’s lyrics are actually tame when compared to some of Ian’s semi-lewd tunes that were chocked with words that made American listeners wish his albums were accompanied by a “British Slang Translated to American English” book.

“Reasons to Be Cheerful, Pt. 3” lists a few Brit-isms like “gigolos and brasses” (male and female prostitutes) and “Fanny Smith and Willy” (female and male genitalia).

“You’re More Than Fair” gives a wink-wink-nudge-nudge play-by-play of a couple having sex on a roof, a hallway, a bathroom…you name it, they’re there!

But if there was anyone who had a right to laugh to keep from crying, it was Ian who contracted polio at the age of seven which shriveled his left arm and leg.  He was sent to live at Essex’s Chailey Heritage School, a Dickensian institution for disabled children.  It epitomized Jerry Butler’s “Only the Strong Survive;” in that if a child fell down, it was up to the youth to upright him or herself.  Ian remembered: “So there were quite a few tortoises lying around.”

His son, Baxter, theorized that his father’s childhood hell turned him into a “Polaris missile.  He would seek out someone’s weakness in seconds and then lock onto it.  I think he used fame as an antidote to that childhood feeling of not being able to control his environment.”

After Ian did his time in Chailey, his family pooled their money and enrolled him into a private grammar school.  His gift of gab and art got him into Walthamstow School of Art where he was taught by Peter Blake (who co-designed Sgt. Pepper’s Lonely Hearts Club Band’s sleeve).  After attending college, Ian taught art at Canterbury Art College for a number of years, until he realized he’d rather be fronting a rock band than standing in front of students.  Even Ian was perplexed by his career choice:

“If you’re a jazz lover, which I am, you don’t think of rock ‘n’ roll as something to aspire to.  When you come offstage at some dodgy pub gig, you’re lucky if you think you’re [risque British music hall comedian] Max Miller.”

Perhaps Max would’ve aspired to have Ian’s massive success thanks to his band’s (the Blockheads) “Hit Me With Your Rhythm Stick;” which was a number one hit in England.  However, the song didn’t make any dent on the US charts, but his son Baxter, (who posed besides his dad on the cover of Ian’s iconic 1977 New Boots and Panties!! album) absorbed his share of dents because of the tune; recalling that when he was eight: “I did get sixth-formers (ages 12-13) sitting on me saying hit me with your rhythm stick, bang, bang, bang, and basically I learned to fight back.”

But shortly after Ian’s second smash “Reasons to be Cheerful, Pt. 3” in 1979, the Blockheads output and Dury’s fame waned–much to his relief: “I got seriously fed up with being recognized.  ‘Cause the way I walk, I’m ultimately very recognizable anyway.  And I read that Paul McCartney if he’s recognized too often, he walks briskly away.  But if I do that, I fall over!”

Ian then poured his creative juices into playwriting (the book to a disastrous musical, Apples) and steady film acting work; playing Meat Hook in Roman Polanski’s Pirates and Bones in the Bob Dylan vehicle Hearts of Fire.

He first met Dylan as they were about to pass each other in a hallway.  Dylan stopped, pointed at Ian and exclaimed the title of one of Dury’s best tunes.

Dury replied, “One and the same!”

Ian’s two children from his first marriage could relate to the short shrift Dylan gave their dad.  Before he found some fortune and fame, Dury left them and their mother in “extreme poverty.”  And when he became famous and had a bit of copper, his daughter Jemima noted: “Dad was just never reliably there for us.  Or there at all really.  He wasn’t off his head all day — he wasn’t quite Keith Richards — but he did smoke spliff for breakfast, lunch, and dinner and I’m not sure he could handle it very well.  I wrote him an angry letter saying, ‘I’d much rather you made me a cheese sandwich than give me another £20.’”

Dury wound up marrying a second time and reconciling with his children before his death from cancer at the age of 57.  He left behind a nice fortune but could have had a sizable pot if he’d accepted an offer from Andrew Lloyd Webber to write the libretto for Cats. When asked why he turned down Andrew, Ian replied, “I can’t stand his music.  I hate Andrew Lloyd Webber.  Every time I hear ‘Don’t Cry for Me Argentina,’ I feel sick.”

4 comments on “Ian Dury: More Than An Acquired Taste”