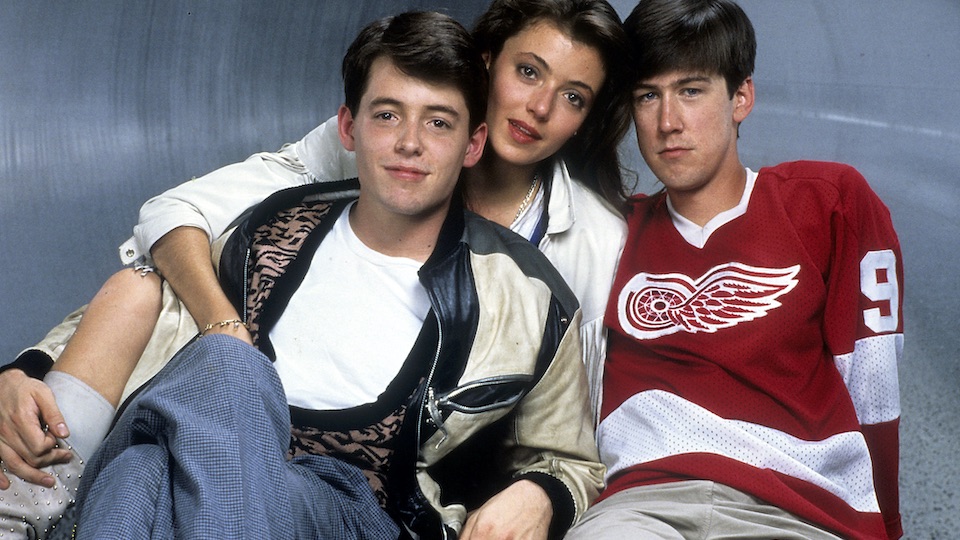 His hands are cold and clammy. His mother is concerned. Straining to sit up, he insists that he’s okay to go to school. His parents decide he should stay home. They both work but will check in on him at some point. He lays back down, looking terrible, and they leave the room.

That’s when the cheeky teenager sits up, turns to the camera, and says, “They bought it.”

Characters in a film are supposed to know they are characters in a film. When they break that wall, it’s generally done by looking into the camera, but they may also comment about the audience, talk about messing up the script, or “break character” intentionally. Mel Brooks fans love this. James Bond fans do not.

When does breaking the fourth wall work? Why is it that sometimes it doesn’t? And why does this fourth wall exist in the first place?

Modern audiences are often unaware that the concept of a fourth wall is a relatively new one. “To be or not to be”, when performed in front of James I in 1619, was spoken directly to the King of England and the audience he was with. Today, the lines are acted as if the character is thinking out loud, oblivious to anyone else. To them, the audience doesn’t exist.

Shakespeare’s “Hamlet” spoke directly to the audience, a one-sided conversation explaining directly what the character was going through. Over a thousand years earlier, the Greeks had their “chorus” tell the audience what was happening. Even the Italian poet, Dante Alighieri, addressed his readers dozens of times as he led his characters through the “Inferno.”

For millennia, it was unusual for actors NOT to address their audience.

This changed in the 1700s, after the French critic and philosopher, Denis Diderot, wrote that actors should “behave exactly as if the curtain had never risen.” This concept, which playwright Moliere called “The Fourth Wall” quickly gained popularity.

By the time the 20th century arrived, it was the convention of almost all performance art. The great director and acting coach, Konstantin Stanislavski, insisted that all actors who used his “Method” engage in “public solitude.” Famous supporters include Robert De Niro, Steve McQueen, and Dustin Hoffman.

Of course, movies are perfect for using the fourth wall. There is already a “wall” between actor and audience. Often it spans continents, and years. The movie actor performs in front of a camera they ignore, and we experience their character’s life on a screen in the future.

We believe our brain when it tells us that the strange things we’re seeing can be (kind of) true. This fourth wall helps us more readily accept that the Ark of The Covenant can melt Nazi faces, a giant shark can rip a boat in two, and Tom Hanks is really a thirteen-year-old boy.

In fact, this suspension of disbelief is why Diderot wrote what he did. The fourth wall was protection for the actors during the French Revolution. The subversive things said on stage were not them – it was the characters in a world far away!

Breaking the fourth wall can work very well; when the movie actively doesn’t expect us to suspend belief, a nod to the camera lets us know that everyone is in on the joke. “We’re being silly,” the movie tells us, “don’t take anything here seriously.”

To enjoy films like the Indiana Jones franchise, Big, or Jaws, the power of the fourth wall immerses us in a world otherwise hard to believe. “Take us a little seriously,” the film says, “you will enjoy it more.” Fantastical sharks are far more terrifying if we can convince ourselves they are real.

The world of James Bond is just the sort of world that requires suspension of disbelief. We need to believe that a car can have an ejector seat and a spaceport can hide in a volcano. Most important, we need to believe that a martini-drinking, womanizing, one-man-army can not only exist but save the day. Sean Connery may be old but, with unbelievable gadgets and some well-choreographed judo moves, we can believe he is a superspy.

So, in the opening scene of On Her Majesty’s Secret Service, as we try to suspend disbelief further and accept a new face for our beloved spy, we may revolt against the attempted humor when George Lazenby says “this never happened to the other fellow.” This breaking of the wall is against the very thing we are already struggling to do – immerse ourselves in a “new” Bond. It doesn’t matter if this man then drinks a martini, hunts Blofeld, or carries a PPK. Hardly funny, and completely unnecessary, that one line has told us “you can’t think this is real”.

It has broken our immersion.

Sadly, this is one of many examples where breaking the fourth wall is done poorly. From Superman (1978) winking at the camera to Jerry’s aside in Some Like It Hot, movies that otherwise try to convince us that their worlds are “real” can shatter our immersion in only a few frames.

Having the fourth wall can help us get lost in a film. Breaking it can sometimes be hilarious. Not respecting it –  not appreciating the power it holds – can also ruin a movie for everyone.

2 comments on “In Defense of Hollywood’s Fourth Wall”