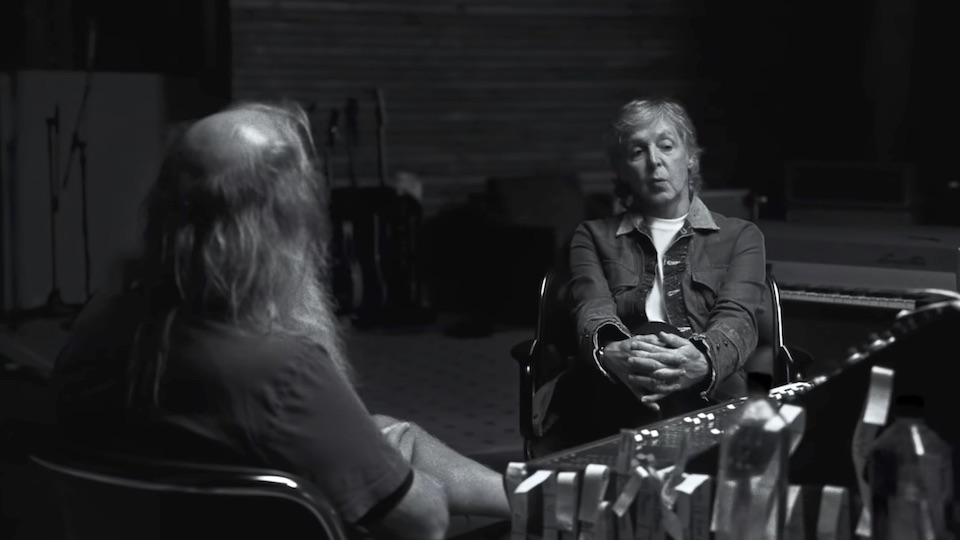 It’s not often that one can sit down with Sir Paul McCartney, listen to original master tapes of Beatles music, and joke about trying to sneak mistakes past George Martin.  But that’s the treat you’re in for when you stream McCartney 3, 2, 1 which was just made available on Hulu.

This 6-part-mini-series spends around thirty minutes per episode discussing not only Beatle music but also songs from McCartney’s early post-Beatles albums, growing up in Liverpool, and even listening to an in-progress ditty that Paul plays on the piano. The backdrop for this extended interview is a small, dimly lit circular stage that includes a 1960s-era engineer’s station, an upright piano, an acoustic guitar, and a Hammond organ. Paul occasionally moseys over to each. Intermittently, Rubin and McCartney will sneak off to a small room where Rubin, sitting on the floor barefoot will listen as Paul shows that he’s a great guitar player as well.

Rick Rubin is known as a world-famous record producer, co-helming Columbia Records and starting Def Jam records when he was still in high school. He ultimately produced LPs for LL Cool J, Public Enemy, Run-DMC, and the Beastie Boys. Later he turned his attention to metal and collaborated with the Red Hot Chili Peppers, Metallica, and Black Sabbath. No question: Rubin loves music. You can tell by the enthralled look on his face throughout the series. He’s also no slouch on the mixing board as he and Paul pull back layers on famous Beatles tunes to reveal the talent behind each instrument or vocalization. But it’s the backstories that make this a memorable series.

In one segment, McCartney describes how John Lennon performed his idea for “Come Together” on acoustic guitar. Paul pointed out that it sounded very much like “You Can’t Catch Me,” a classic Chuck Berry song, including the lyric “here come old-flat top” with that same blues-shuffle style (Lennon was later sued by Berry’s music publisher and because of the settlement had to include “You Can’t Catch Me” on Lennon’s 1975 collection of covers, Rock ‘n’ Roll). Instead of tossing the idea aside, Paul suggested slowing the song down, adding a funky bassline and the result is what we hear today. Rick and Paul then further examine “Come Together,” pulling back the layers.

In another poignant segment, Paul discusses how he met George Harrison when they shared a bus ride together to their all-boys high school. A seat came open next to him, and George plopped down on it. Soon enough they started discussing their love of music. When Paul met John, Paul said, “I’ve written a few songs” and John replied that he had as well. And later, McCartney describes how Ringo sat in with the band when Pete Best couldn’t make a practice session and the band discovered what a really good drummer could add to their music.

Paul also discusses growing up in a home where the family frequently gathered around the piano where his father would play and sing show tunes. He pretty much believed that all families experienced this bliss until he met Lennon, whose father left when John was three and whose mother died when she was struck by a car.  It made Paul realize that others had tough childhoods. It also reinforced the tension between the ever-optimistic McCartney and the wry and cynical Lennon, as classically heard in the song “Getting Better” where Paul sings that it’s “getting better all the time” and John replies “it couldn’t get much worse.”

The series also explores Paul’s early solo days with a short discussion on the breakup of the Beatles and Paul’s decision to run off to Campbelltown, Scotland, and avoid the music scene for a while. He was always drawn to music creation and continued to write songs. Those songs were released on his first solo album McCartney (1970) which became Number One for a few weeks before yielding that position to Let It Be.  According to Paul, this made him realize that there was a future for him outside of the Fab Four.

Classic stories about Paul being at a Hendrix show just after the release of Sgt Pepper’s Lonely Hearst Club Band and hearing Jimi cover the opening track – are given more color and details, especially related to Hendrix calling for help to tune his guitar. McCartney talks about how they couldn’t read music but shows how you can pull together a decent song using just a C-chord moved up and down the piano, improvising a simple but catchy song for Rubin. There are discussions about using tape loops, pushing mixing boards to their limits, and repeatedly forcing apprehensive engineers to try tricks to elicit unique sounds.

The series smartly strings together easily digestible segments into six parts, each one focusing on slightly different topics or eras. A small critique is the times when rather than just giggling and replying, “oh wow”, Rick could have led Paul into a deeper discussion. But there’s no doubt that Paul certainly is enjoying the experience, as seen in his delight and surprise about the superb musicality that can be found on the isolated tracks.

Later this year, keep an ear out for the three-part The Beatles: Get Back documentary by Peter Jackson.   That’s another must-see for any Beatles or McCartney fan.   And this McCartney 3,2,1 mini-series is a great way to prepare for it.