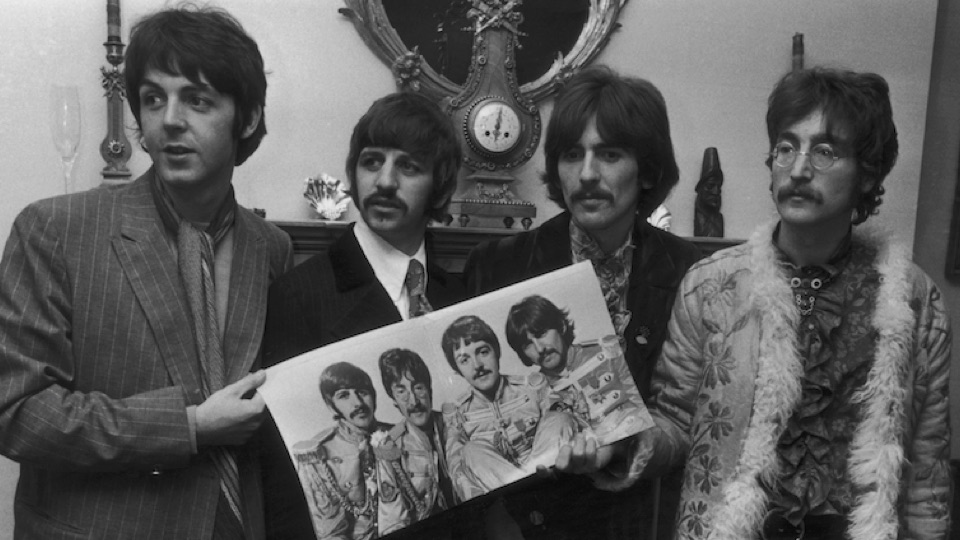 Since its 1967 release, The Beatles’ Sgt. Peppers Lonely Hearts Club Band regularly edges out Bob Dylan, Pink Floyd, Michael Jackson and others for the top spot on “Best Ever” album lists. So, it doesn’t need my testimony to justify its place in the pantheon. Or does it? In recent years, a number of critics have taken pot shots at the Fab Four’s landmark release including New Musical Express which quipped that people actually listen to Revolver and Rubber Soul but called Pepper “sprawling” and “indulgent.” Well, sure it’s over-the-top. But that’s what I love most about it. Who cares if Keith Richards called it “rubbish”!

When I first encountered the record as a pre-teen I was just starting to expand my horizons and this hurly-burly album cover led the way. Seeing exotic and risqué figures like Aleister Crowley, Mae West, Lenny Bruce, Alduous Huxley, and Edgar Allan Poe made me curious to seek out more about them. Thank you, Beatles! Throw in the kooky cardboard inserts and the plethora of apparent “Paul Is Dead” clues hidden in nooks and crannies and you’ve got hours of fun before the stylus even hits the vinyl.

Related: “How ‘Sgt. Pepper’ Got Its Cover”

Sgt. Pepper’s is often credited as being the first concept album. Truth be told, the Mothers of Invention’s Freak Out predates it by a full year. Plus, Sinatra was doing concept albums in the ‘50s. Can we call it the first massively popular concept album in rock? Maybe? In 1980 Lennon told Playboy, “Sgt. Pepper is called the first concept album, but it doesn’t go anywhere. All my contributions to the album have absolutely nothing to do with this idea of Sgt. Pepper and his band; but it works ’cause we said it worked.” He was right: The important thing is how this album allowed the guys to assume the guise of another band and shake off the mop-top image once and for all.

How Stella’s Dad Got His Groove Back

John, Paul, George, Ringo and a motley group of friends recorded a loop of gibberish for the record’s run-out groove to play ad infinitum or until the listener got up to lift the needle. Critics point to this bit of inspired lunacy as more evidence of the album’s insufferable whimsy. Some people love it; some people hate it. I consider it a welcome nudge in the ribs after the reverie of “Day in the Life” — much like Paul’s “Her Majesty” takes the piss out of Abbey Road’s otherwise lofty ending. The Pepper prank also provides more fodder for the “Paul Is Dead” crowd. Backwards, the gibberish either translates as “We’ll all be magic supermen” or “Will Paul be back as superman?” Lovably daft and a tad spooky.

Not content to merely trip out human beings, the Beatles attempted to freak out canines, too, with a 15 kilocycle pitch at the end of the album’s final track. As McCartney said, ”We put a sound on Sgt. Pepper only dogs can hear. If you ever play Sgt. Pepper watch your dog.” Not having a dog at the moment, I can report that I once witnessed a cat be decidedly unmoved during “Getting Better.” Just saying.

Their Life in a Day

Remove the trippy elements from “Lucy in the Sky with Diamonds” and “Being for the Benefit of Mr. Kite” and you’re still left with two great songs on Sgt. Pepper’s: “With a Little Help From My Friends” and “Fixing a Hole” hold their own against any in the Beatles’ canon. “She’s Leaving Home” is not as emotionally taut as, say, Revolver’s “Eleanor Rigby,” but it’s still a gorgeously lush number, while “Within You Without You” is sumptuous and expansive in its own way. All of it tumbles into one of the Fab’s hardest rocking tunes—the title track’s reprise—which in turn leads to one of their greatest and one of the finest in all of pop music, “A Day in the Life.” I can’t personally comment on the shock waves this LP caused on release, but I will say that I listen to this record front to back in rapt attention frequently, and have for years.

Photo Credit: The Beatles at a photocall for the launch of their album ‘Sergeant Pepper’s Lonely Hearts Club Band’, held at Brian Epstein’s house at 24 Chapel Street, London. (Photo by John Downing/Getty Images)