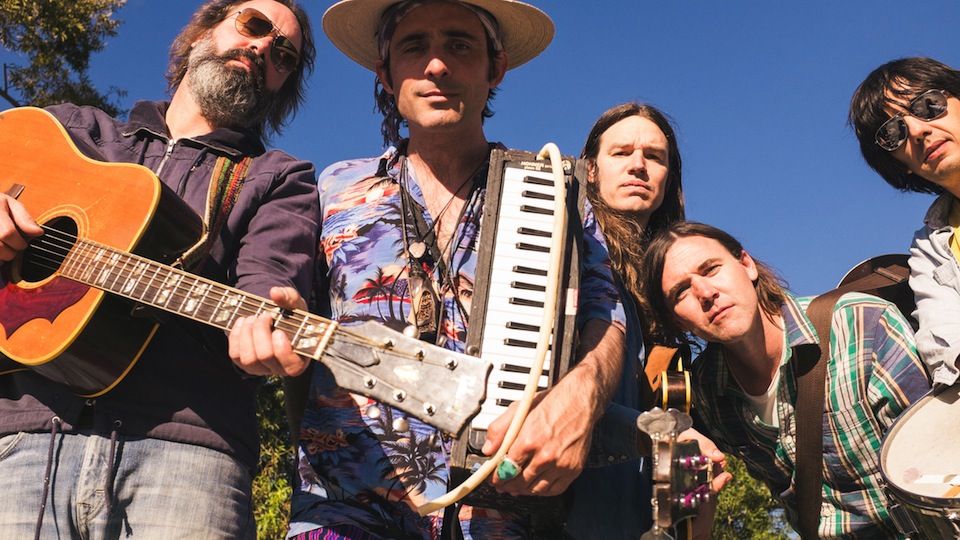 The Skiffle Players have quite the illustrious line-up what with Cass McCombs, Neal Casal from the Chris Robinson Brotherhood, Dan Horne from Circles Around the Sun, and Aaron Sperske and Farmer Dave Scher, both of Beachwood Sparks. But if you think that translates into internal competition, you’d be mistaken. This is very much a cooperative effort in which songwriting and singing duties are spread out among all the various members. In short, there is no single front man. And so in honor of the band’s upcoming LP Skiff (due out Fri., Oct. 26), we’re interviewing Farmer Dave Scher just because.

Q: On “Cara,” your first song on Skiff, you segue smoothly from English to Spanish and back again. Are all the members of the band bilingual? Have you ever performed songs entirely in Spanish?

Q: There’s some real playfulness on this LP, especially on your satirical song “The Law Offices Of Dewey, Cheatum, and Howe” which beckons at one point to “come on in and sit right down.” What do you imagine those offices would look like?

A: There would be piles of papers, a neck brace and a pair of crutches or two. Half of a foot long sub. A stuffed or paper mâché parrot. Probably a long line at the front door with a noisy fan. And the television hanging from the ceiling plays the advertisement on repeat. A green sharkskin suit and a megaphone.

Q: “Local Boy,” Skiff’s first single, makes a reference to Tartuffe at one point. Who’s the Moliere fan in the band?

A: Hats off to Cass McCombs for the Tartuffe reference!

Q: The instrumentals “Herbamera” and “Wham!” (hooting and hollering aside) are the shortest tunes on the album. Since they’re without words, do they tend to expand the most during the performance? Which song has inspired the longest jam?

A: Our longest jam so far is probably “Coo Coo Bird,” off Skifflin’. The instrumentals do not necessarily expand out more than the rest. [Editor’s Note: The recorded version of “Coo Coo Bird” runs six minutes and thirty-eight seconds.]

Q: The underlying drone in “Santa Fe” sounds like a bagpipe. If you were to pull another instrument into The Skiffle Players, what might that be?

A: The instrument you hear in that song is a harmonium, a sort of hand-powered pump organ. Though not yet officially voted in, I think the next instrument will be tuba.

Q: You close the album with “Sweet Georgia Brown,” a jazz number that’s nearly 100 years old. What is it about this song that keeps musicians coming back to it?

A: That song is what ‘Skiff’ is all about. It reaches out through history to shake and excite you. There is no expiration date. We feel great affinity with the timeless tunes of yesteryear, today, and tomorrow… long may they play on!

Related: “An Instrument That Remade Jazz, Rock, Soul, and R&B”

Q: Everyone in the band plays independently or in another band as well, some with rigorous touring schedules. Any future gigs on the horizon or do you performances tend to happen in a more impromptu fashion?

A: There are clusters of dates gathering like storm clouds on the horizon. Stay tuned for the latest local weather updates.

Q: What’s your favorite city to perform in and why?

A: California cities all tie for first place. We get so much love from Novato, San Francisco, Big Sur, Los Angeles, Pioneertown, and beyond. Coming soon, “Skiff in Space.” Thanks and happy listening.