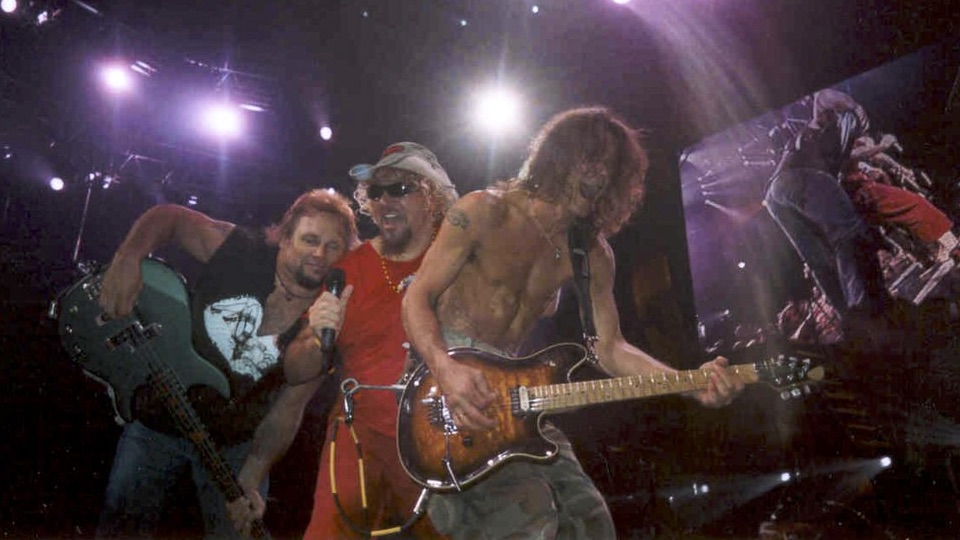 It’s one of the ongoing debates of rock: David Lee Roth or Sammy Hagar? The issue has divided fans of the mighty Van Halen for decades. It’s no surprise that a large portion of fans side with the band’s original incarnation featuring David Lee Roth which took the rock world by storm in 1978.  The Hagar years have often garnered antipathy which, to this writer, seems unwarranted.

The relationship between Van Halen and its lead singers could be described as complicated at best. Roth was an enigmatic frontman fueled by ego, while guitarist Eddie Van Halen was a reserved virtuoso who let his music do the talking. On paper – and in sound – they certainly made a dynamic duo. But the two had a fractured relationship from the get-go. Although the first six Van Halen albums speak for themselves, it’s well-documented that behind the scenes the group was imploding. Roth’s control over the spotlight, musical direction, and even groupies became too much for the rest of the group to bear. After years of butting heads, Dave left the band in 1985.

With Roth abruptly out of the picture, Eddie, Alex, and bassist Michael Anthony were unsure of what to do. Eddie’s phone was ringing off the hook with calls to collaborate from the likes of Pete Townshend, Brian May, and even Phil Collins. Torn between the allure of putting together an “all-star” record or continuing on with a new frontman, the fate of the band was left to a coin flip. The group decided to continue, but the question remained – who was going to front the biggest rock band in the world?

What happened next was something from a rock n’ roll fairy tale. Eddie rolled his Lamborghini into the shop of renowned exotic-car mechanic Claudio Zampolli. He spotted a Ferrari across the room and inquired who owned it. Zampolli replied, “That’s Sammy Hagar’s. You should give him a call!”

One phone call later, Hagar found himself jamming with the Van Halens at their newly-built personal studio. Eddie threw on a few half-finished songs for the album they’d been expecting to record with Roth. “Right off the bat, Sammy came up with melody, lyrics, everything!” recalled Eddie on MTV’s special Van Halen Unleashed. “I was going, ‘Where is this guy from?!?!’ It blew me away.”

The ensuing result of that chemistry was 1986’s 5150, the album that introduced “Van Hagar” to the world. Hits like “Dreams,” “Summer Nights,” and “Best of Both Worlds” became immediate staples. Eddie, Al, and Mike had a new lease on life with Sammy helping skyrocket the band’s morale overnight. It was evident the group’s newfound chemistry seeped through on its recordings — 5150 became the first Van Halen album to reach Number One on the charts. “That was the greatest time in my musical career,” Hagar told Howard Stern. But not everyone was sold on the new outfit.

Many fans of the Roth-led Van Halen felt Hagar’s incorporation into the band had moved the needle into the direction of pop over rock. Skeptics of Hagar’s ability to front the hard-rocking ensemble only became more dug-in after the release of 1988’s OU812 as its singles delved deeper into synth-driven hits like “When It’s Love” and “Feels So Good.”

This orbit should not have surprised anyone. Eddie was a classically trained pianist. Keyboards had been a part of him before the guitar ever was. The last VH album with Roth (1984 ) saw massive incorporation of synthesizers in their hits “Jump” (written as early as 1982) and “I’ll Wait” (co-written with Michael McDonald). When Hagar came into the band, it enabled Eddie — the predominant songwriter since the group began — to continue down that path. “That’s what Eddie did. Eddie wanted to do that. He liked playing keyboards, and he was freakin’ good at it,” Hagar told Trunk Nation on Sirius XM. “It wasn’t like I was saying ‘Let’s do some more keyboard songs!’”

The 1990s erased any doubt that Van Halen had lost their rock-edge. The group enlisted former Zeppelin producer Andy Johns for their third Hagar release, For Unlawful Carnal Knowledge, which stormed out of the gate with four top ten rock singles: “‘Poundcake,” “Right Now,” “Runaround,” and “Top of the World.” No synthesizers were to be found – just a four-piece band (five-piece if you include Eddie’s power-drill on “Poundcake”) that proclaimed to the world that their latest album would “kick your butt’s butt.”

Meanwhile, David Lee Roth would find the 90s to be less than compassionate. While Van Halen found themselves enjoying their fourth consecutive number one album in Balance (making Van Hagar a perfect 4/4 with albums to hit the top of the charts, Roth was on the end of a failed Vegas residency, a $10 drug bust, and a handful of records that garnered middling attention compared to those with his former band. If anything, the prior decade had proven that while Van Halen could survive without Roth, Roth could not survive without Van Halen.

Of course, all good things eventually come to an end – especially in Van Halen. The band found itself under new management in the mid-’90s which led to tensions between Hagar and Van Halen. Hagar’s eventual dismissal in ‘96 initiated a hot mess of a frontman carousel that included a Gary Cherone residency, an overnight reunion-and-sacking of David Lee Roth, and a less-than-jovial Hagar reunion. The late 2000s found the band settling into an intermittent groove with David Lee Roth.

Unfortunately, the world lost Eddie Van Halen on October 6th. The stark contrast in personality and style between Hagar and Roth can naturally broaden a divide amongst the fan base but should never mar the appreciation of Van Hagar. Sammy helped bring stability to a band that was in desperate need of solidarity – and the music greatly benefitted. After Eddie Van Halen’s death, we don’t need another reason to disparage “Van Hagar” but rather appreciate a band who gave us the best of both worlds.