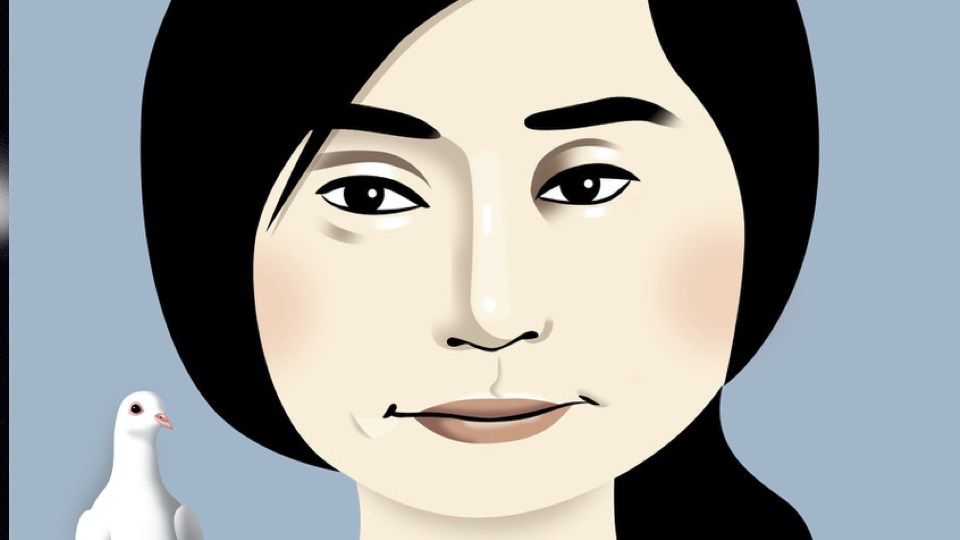 Editor’s Note: Author Madeline Bocaro has just released an intriguing new book, In Your Mind: The Infinite Universe of Yoko Ono. CultureSonar‘s Eoghan Lyng had a chance to discuss it with her.

CS: Let´s start with the ultimate question: What was it that John Lennon saw in Yoko Ono?

MB: In a nutshell, John saw positivity, humor, and complete understanding in Yoko. The longer answer is that John was skeptical about the art world. He was also at a turning point in his life. At Indica Gallery in 1966, John saw what would become his stairway to heaven – a white ladder leading up to a canvas on the ceiling, with a magnifying glass hanging on the end of a chain. This work by Yoko was titled Ceiling Painting. When John reached the top of the ladder, he looked through the spyglass and saw a single word written in tiny letters. This simple word, “YES” became his koan, his mantra, and his path to freedom.

CS: Ono´s artistry was startlingly honest, whether it was recalling the bombs dropped on her native Japan or mourning the child lost in miscarriage. Is that why she´s remained relevant?

MB: Honesty and truth are the main elements in Yoko’s work. Her intent is mainly therapeutic, for herself and for others. She constantly needed to free herself and others from the burden of loneliness, pain, and tragedy, which began in childhood. In varying degrees, we all need to fill voids in our lives and to heal. This is why her work is so endearing and relatable. Yoko enlightens us about our own inner power. She alerts us to our dangerously misplaced values.

CS: She´s a novel person, and deserves to be commemorated in a novel fashion. What was the impetus for your book?

MB: As an admirer of hers since the 1960s, I wanted to illuminate her incredible spirit and wisdom. The rampant and cruel mistruths about her must be disproven. The book contains many published quotes from Yoko, John, and others, illustrating all the facts in her life story. The important work of this, generous, gracious, and wise woman needs to be shared with the world. Yoko has been maligned for her relationship with John Lennon, who loved her above all else. In the forty-two years since his death (much longer than the thirteen years they were together) Yoko is still releasing John’s work and continuing his legacy. Their incredibly deep love story continues and is woven throughout the book.

CS: Fly is my personal favorite album of hers. Do you think there´s a reason why that holds up fifty years after its completion?

MB: Fly is my favorite album as well. It’s a nice combination of rockers and avant-garde excursions. It was so far ahead of its time. It will still hold up in a hundred years! When Rykodisc released Yoko’s solo albums in succession in 1997, their ad read, “OH YES! YOKO ONO… Eleven albums ahead of their time. Their time is now!”

CS: She worked well with Ringo Starr. Was there a special bond between them that she didn´t enjoy with Harrison or McCartney?

MB: Ringo always kept a steady beat with Yoko in every way. His stellar drumming on her first solo album shows that they could relate musically as well. Ringo joined Yoko for an outdoor re-creation of the Bed-In on September 13, 2018, in New York City, promoting the John Lennon Educational Tour Bus. They share the same mantra: “Peace and Love.”

CS: Ono used Lennon´s blood-stained glasses on Season of Glass. Do you think that was her way of paying tribute to Jackie Kennedy, who refused to change her clothes following her husband´s murder?

MB: On the album cover, Yoko shares her nightmare through John’s glasses – illustrating what the world had done to him, and to her. She reflects the horror right back on society. Yoko lets us see through the shattered window of her world. She hides nothing – as always. Yoko stood inches away from the bullets that killed John. She saw her husband’s blood spill on the ground in front of their home. In an interview for Ina television (France) in December 1981, Yoko spoke about the album cover which she designed and photographed.

“John was killed, and it was very important for me to show that to the world, and for people to remember. Because I think that all of us are responsible for his death, of course including myself. Both John and I were always trying to make a peaceful world. And it’s very ironic that John who loved peace so much died in a violent way.”

CS: Lennon referred to Ono as her second collaborator, after McCartney. Is that a fair assessment?

MB: Yes, it is. At first, Yoko felt a tremendous wave of fear when John Lennon quit the band. She was concerned that her artistic freedom would be compromised if John was no longer occupied with the Beatles. Yoko was nervous when John said, “Now it’s you and me!”  However, due to their strong compatibility, they jumped right in – to what would be their eternal artistic, musical, and event-driven collaboration in various media. They even dressed alike (in all black or white) like newsprint, bringing us the news and delivering truth every day, always with positivity and humor.

CS: Some Time In New York City highlights “We´re All Water,” a similar aphorism to “Imagine.” Did she influence Lennon´s philosophies?

MB: John already held his own philosophies. Yoko taught him to implement them. Their ideas were in complete harmony. A passage in her book Grapefruit (1964) influenced the song “Imagine.”

CS: Final two questions: Firstly, could you highlight five art pieces – you choose the discipline – that demonstrate the breadth of her art as a person?

MB: Yoko’s unfinished conceptual and inclusive artwork asks us to imagine or complete a thought – releasing us from physical and mental limitations, expanding to the universe, to the realm of the invisible and extrasensory perception.

In her work Three Spoons, Yoko presents four silver spoons – exemplifying the many illusions that we are presented with in life, illustrating misinformation vs. truth. The fourth spoon is not mentioned in the title of the piece, causing us to question what we are being told – to question reality. Three Spoons is a contrasting piece to the objects in Yoko’s Half-A-Wind show (in which we must imagine the missing half of the items on display).

Yoko’s relationship with the sky has always been important in her work. One of her most endearing works is A Hole To See the Sky Through – a postcard with a hole in the center. This represents the limited view of the sky that Yoko and her siblings saw through a hole in the roof of a shabby farmhouse (where she and her siblings were sheltered during WWII as children). She told Jonathan Cott of Rolling Stone, “Did you ever notice that when you’re in a plane, the vibrations you’re feeling that are coming to you are totally different from the ones you feel when you’re on the ground? But when you go up there, it’s only sky – you’re free from all those earthly vibrations. And it’s so beautiful. A lot of the things I’ve written were done up in the sky.”

The Bed-Ins were the first important events that she and John did together, staying in bed for a week – for peace. Look at how many activists there are now because in 1969 John and Yoko showed us that protest could be done in a whole new peaceful way. They also collaborated on the War Is Over! poster campaign. There are entire chapters in the book about these events.

During Cut Piece, Yoko sits on a stage, inviting audience members to cut away pieces of her clothing with scissors. Anything can happen. The first person picks up the scissor and selects a part of her clothing to snip. The scissors are taken by the next person. The unmasking continues as the audience performs the strip tease. There is an air of danger, titillation, and nervous laughter. Yoko goes into a protective trance. She told The Guardian in 2014, “All powerful art has many layers of drama. I was originally thinking of the Buddha and how he gave everything up. The audience was quiet and still, and I felt that everyone was holding their breath. While I was doing it, I was staring into space. I felt kind of like I was praying. I also felt that I was willingly sacrificing myself.”

Promise Piece is an event in which Yoko gives audience members a piece of a broken object or a piece of sky that she has fabricated in plastic. The instruction is to meet in ten years and put it back together again, with no exact time or place given. This is based on ‘Ichi-go ichi-e’ – each meeting is a miracle, which could possibly be our last. Promise Piece derives from Yoko’s Mend Piece, which is rooted in the Japanese practice of kintsugi (金継 ぎ, きんつぎ – “golden joinery”).

I’ll also mention a sixth piece, a popular favorite, beloved by everyone who sees it. Wish Tree is a living monument to our dreams. As a child, Yoko visited Japanese temples, where it is an ancient custom for people to purchase and tie pre-printed messages on paper tags onto tree branches. The multitude of white papers tied to the trees resemble blossoming white flowers. Yoko decided that people should write their own wishes. She told curator/art historian Hans Ulrich Obrist in June 2008, “The wishes that we make, even if it’s just written on paper and nobody sees them, I think they do affect the world and the universe.”

Yoko’s Wish Trees are now growing in museums and in gardens all over the world. The wishes that she has collected are stored in the wishing well of Imagine Peace Tower – a tower made of light, created for John on the Isle of Videy in Iceland.

The inherent beauty of this work is that Yoko never reads the wishes. She wrote on Twitter, “People don’t remember each tree in a park but all of us benefit from the trees. And in a way, artists are like trees in a park.”

CS: And finally, are there any other projects you would like CultureSonar to know about?

MB: I have been busy promoting this book. I have just set up a new website where you can read reviews and excerpts, and watch podcast interviews that I have done. You can also order the book on the website.

Photo: Cover art for “In Your Mind: The Infinite Universe of Yoko Ono”

2 comments on ““In Your Mind”: A Deeper Look at Yoko Ono”