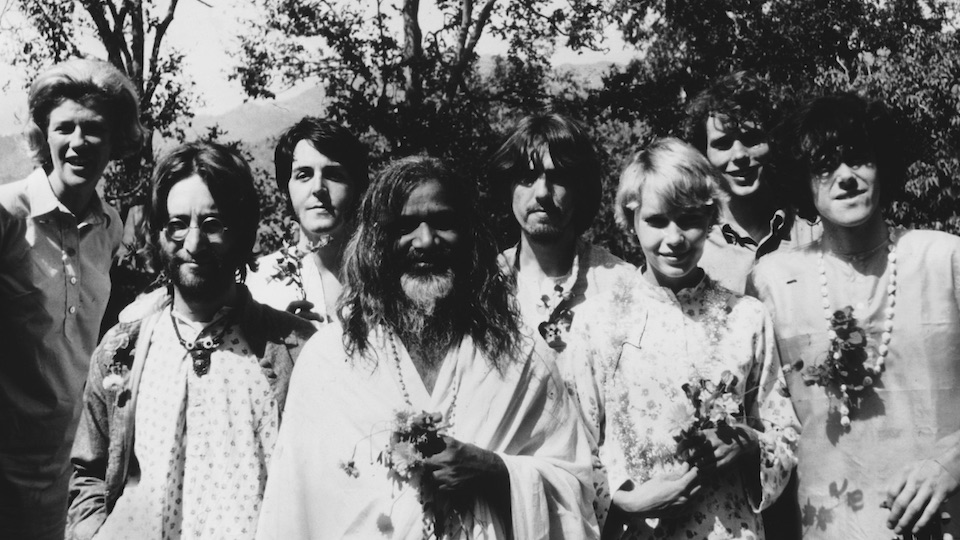 An unlikely setting for songwriting — an ashram located in Rishikesh, India — nevertheless proved an incredibly creative space for the Beatles in 1968. Away from the pressures of superstardom, they composed at least 40 songs while on retreat with Maharishi Mahesh Yogi, the well-known founder of Transcendental Meditation commonly referred to as “TM.” Donovan Leitch, also present in Rishikesh, suggested that the Fab Four’s next album could be plain white and nameless because of their immense fame. Thus (according to Donovan, anyway), The White Album was born. So what are the real meanings hidden inside these songs written under Maharishi’s influence? Some details below.

• The Beatles weren’t the only pop stars at the ashram that year. One day at breakfast, Paul McCartney played “Back in the U.S.S.R.” for fellow attendee Beach Boy Mike Love who suggested mentioning girls from Moscow, Ukraine, and Georgia in the lyrics as a nod to “California Girls.”

• The second track on The White Album has quite a backstory: Mia Farrow’s sister Prudence had abused drugs as a teenager. While in Rishikesh, she spent day and night in meditation while abhorring the Beatles’ celebrity circus. One day when John Lennon and George Harrison burst into her room to sing, she just wanted them to disappear so she could continue meditating. Prudence was suffering terrifying LSD flashbacks while at the ashram. But three weeks of private meetings with Maharishi and daily treatments with a massage therapist returned her from the abyss. Just before leaving Rishikesh, Harrison sent Prudence a note that Lennon had written “Dear Prudence” for her. Sanity and a song? Not bad.

• At six feet tall with a crew cut and often dressed in white, Richard A. Cooke III, who went by “Rik,” was a textbook Ivy League jock. While in Rishikesh, he and his mother Nancy Jackson embarked on a tiger hunt that ended with Rik shooting a tiger in the head. Shortly afterward, Richard and Nancy reported their activities to Maharishi who was in his bungalow with John, Paul, George, and Jane Asher. When Maharishi interrogated Rik, Lennon piped in with, “Don’t you call that slightly life-destructive?” Nancy’s defense of their action (“It was either the tiger or us”) was met by Maharishi’s cold response: “Life destruction is life destruction. End of story!” Thus originated “The Continuing Story of Bungalow Bill.”

• Lennon said afterward that he composed some of his best songs while at the ashram and some were quite personal: “I’m So Tired” chronicles his persistent insomnia, hallucinations, misery, and suicidal thoughts, and a lyric such as “I’m so lonely I want to die” from “Yer Blues” was no exaggeration.

Related: “The White Album Is My Desert Island Disc”

• During his stay, McCartney heard loud crowing in the early morning which led to him composing “Blackbird” — although he later ascribed deeper meaning to the lyrics as reflecting the Civil Rights Movement. His “Rocky Raccoon” resulted from playing acoustic guitar with Lennon and Donovan on their bungalow roof. As for “Why Don’t We Do It in the Road?” this one was literally inspired by copulating monkeys he’d seen in the region.

• The subject of “Julia” is both John’s mother Julia Stanley and his wife Yoko, whose name means “ocean child.” While in Rishikesh, Donovan taught Lennon the clawhammer guitar method, a banjo finger-picking style which John ended up using on this tune.

• A lecture by Maharishi about the unity of nature and humanity touched the Beatles deeply, and inspired McCartney’s “Mother Nature’s Son,” a song which also references the surrounding landscape as evidenced in lines like “Sit beside a mountain stream / See her waters rise / Listen to the pretty sound of music as she flies.”

• “Everybody’s Got Something to Hide Except Me and My Monkey” echoes a few of the Maharishi’s favorite expressions such as “Take it easy,” “Take it as it comes,” and “It’s such a joy!” Whenever he beckoned someone to meet with him, Maharishi would often use the phrase “Come, come” or “Come on” — the latter of which shows up repeatedly in this song.

• After two months in Rishikesh, John and George suddenly left the ashram in a huff for a few reasons, one being that the guru had reportedly made a pass at a female participant. As the Beatles waited for their taxis, an angry Lennon sang, “Maharishi, you little [bleep]. Who the [bleep] do you think you are? Oh, you [bleep].” When Harrison complained the lyrics were ridiculous, Lennon changed “Maharishi” to “Sexy Sadie.”

• “Revolution” – and its variations – originated from “The Maharishi Effect,” Maharishi’s frequently-repeated theory: “For the forest to be green, the trees must be green; for the world to be at peace, the people must be at peace.” In short, Maharishi believed that politics and treaties would never create world peace whereas a small percentage of the population meditating could.

Editor’s Note: Susan Shumsky is the author of Maharishi & Me: Seeking Enlightenment with the Beatles’ Guru. Her websites are DrSusan.org and DivineTravels.com.

Photo Credit: February-March, 1968. The BEATLES (without Ringo STARR), the American actress Mia FARROW and the British singer DONOVAN posing with the MAHARISHI MAHESH Yogi, with whom they were following a transcendental meditation lesson in Rishikesh, India. From left to right : John LENNON, Paul McCARTNEY, the MAHARISHI MAHESH Yogi, George HARRISON, Mia FARROW and DONOVAN. (Photo by Keystone-France/Gamma-Keystone via Getty Images)