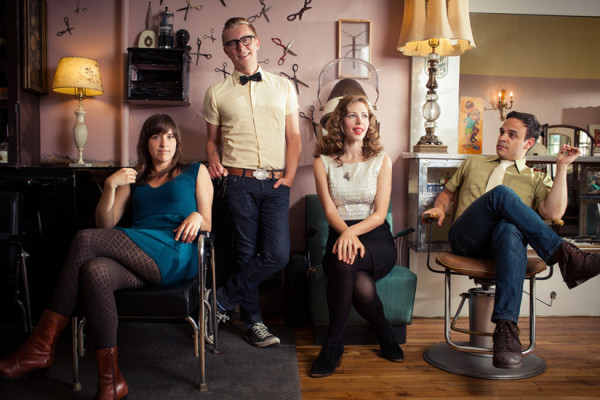 The Jackson 5’s I Want You Back is one of the irresistibly great pop tunes of the Motown era. It’s got everything: monster hooks, insane musicianship, young Michael’s soaring vocal, tight-and-clever lyrics. (The question of who actually played the sublime bass line – the immortal James Jamerson or recently-departed session ace Wilton Felder – is a matter of some debate, but we digress…) With the definitive version already committed to wax, re-interpreting the tune takes guts and chops. Enter Lake Street Dive. The now-Brooklyn-based band formed in 2004 when its founding members met while attending the New England Conservatory of Music in Boston. When bassist Bridget Kearney won the Jazz branch of the John Lennon Songwriting Contest in 2006, things started gathering some steam. But it was LSD’s 2012 YouTube cover of I Want You Back, shot on a street corner in Brighton, Massachusetts, that really put the band on the radar.

The signature elements are all in place: virtuosa singing and alluring stage presence from Rachael Price — plus jazz-inflected harmony and backing from trumpeter/guitarist/founder Mike Olson, drummer Mike Calabrese and bassist Kearney. The vibe is relaxed and the playing tight. You get the feeling these are smart, funny folks who are rabid fans as much as conservatory-trained players.

The band has been on an upward trajectory ever since, catching another break when T Bone Burnett featured it in Another Day, Another Time, a Showtime concert special to accompany the release of the Coen brothers’ 2013 film, Inside Llewyn Davis. Longtime fans treasure the band’s annual Halloween videos, covering deep-backlist goodies, which are always cheeky fun.

They have a new album en route, whose lead single they recently performed on The Late Show With Stephen Colbert.  Their slow-but-steady upward trajectory continues.

They tour constantly — 300 gigs in more than 175 cities over the past two years — so chances are they’ll be somewhere near you soon. Catch ‘em if you can, before the venues get bigger and the tickets more expensive.

4 comments on “Lake Street Dive: A Worthy Band on the Rise”