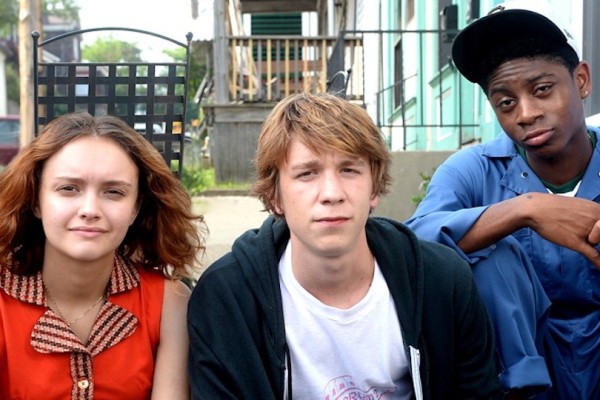 Me And Earl And The Dying Girl, a beautiful, moving film based on the debut novel by Jesse Andrews — brilliantly directed by Alfonso Gomez-Rejon — should not be missed..  With a title that mentions dying in the title, I came prepared to cry with several purse packs of Kleenex on hand, (and yes indeed I needed them), but what caught me completely by surprise was how laugh out loud funny this movie would be. In a nutshell, the story is about two 17-year-old boys, Greg and Earl, who have been friends since childhood, spending their free time making prolific numbers of film parodies, hanging out at each other’s houses eating the truly bizarre food made by Greg’s dad (the hilariously funny Nick Offerman), figuring out how to navigate the socially awkward high school years, while coming to terms with who they are apart from what is expected of them by the well meaning, loving adults in their lives.

The dialogue, the timing, the gestures, the awkwardness, the honesty, the silliness, the discomfort, well, who hasn’t felt those things either as a teenager or as the parent of a teenager? So often when parenting teenagers it is a mystery whether they are listening and taking in any of our “words of wisdom” and important life advice or whether they are mostly exerting tremendous amounts of energy into doing the opposite of anything we suggest. In this film it’s as though we’re getting a glimpse into the brain of a 17 year old, or rather that we are a fly on the wall and can see with greater compassion the challenge of being “almost an adult” once again. My second viewing of this film was with my 17-year-old son who after a tremendous amount of pleading and cajoling, reluctantly spent the afternoon at the movies with his mom.  After the film was over he said, completely without prompting “mom, now I understand why you loved this film so much and why you would want to see it again”. Sometimes they’re listening…

– Katherine Anderson is a violist in the Metropolitan Opera Orchestra. She lives in New York.

0 comments on “Who Knew Dying Could Be This Funny?”