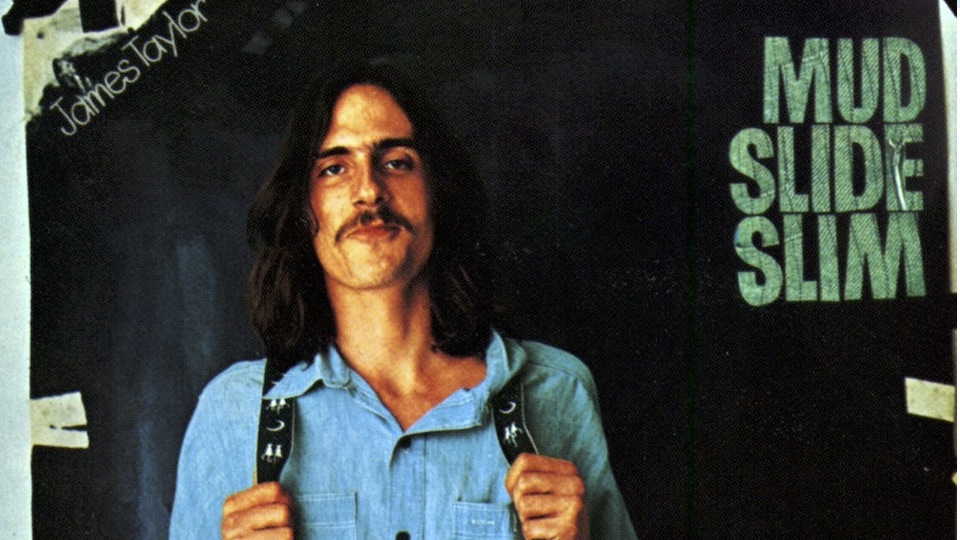 The beginning of the 1970s marked a zenith of the singer/songwriter era. Moving away from bands and big production, youthful ears craved more authentic sounds. The intricate guitar style and confessional lyrics on Mud Slide Slim and the Blue Horizon – marking its 50th anniversary – naturally cast James Taylor in this poetic role.

Taylor was the first artist to release an album under the Beatles’ Apple Records. His self-titled debut album in 1968 was recorded in between the Beatles’ White Album sessions and provided a solid foundation for his career with a creative network of music legends: Paul McCartney, George Harrison, and Peter Asher.

James’ transition to Warner Bros. Records in 1970, with Sweet Baby James, demonstrated the influence of the Laurel Canyon scene on his work. The album featured the contemplative hit, “Fire and Rain” and the cover image was captured by famed photographer, Henry Diltz.

Propelled by his success, James began work on his third album, ultimately proving that his music was here to stay.

Building on the success of Sweet Baby James, Taylor kept many of the same personnel including Carole King on piano, and Peter Asher as producer. Different branches began to grow from Taylor’s musical roots on Mud Slide Slim and the Blue Horizon. The opening track, “Love Has Brought Me Around,” incorporated a jazzy horn section, hinting at what was to come in his career with songs like “Mexico,” or “How Sweet It Is.”

Taking a cue from the Beatles’ “In My Life,” Taylor’s “Places in My Past” demonstrates a similar reflection on the connection between places and people: family, home, and past lovers. Since every good folk album needs a song about trains, “We Are Riding on a Railroad,” provides a requisite tune about the traveling musician, and establishes Taylor’s troubadour image.

The title track, “Mud Slide Slim,” reveals the oeuvre of James Taylor’s songwriting: light-hearted, pastoral, and romantic escapism. Taylor turns into a simulacrum of H.D. Thoreau’s Walden, in the lines: “I’m gonna cash in my hand / and pick up on a piece of land / and build myself a cabin in the woods,” where he’ll remain until “this old world starts to changing for the good.”

The idea of escaping from society into the truth of nature is often explored in music of this period, but Taylor’s candid approach makes it believable. This cabin was actually being built at the time of production, which is why he name-dropped, “Jimmy, Jimmy-John and, Nick and Laurie / The No Jets Construction.” These were the people who helped him build his homestead on Martha’s Vineyard, where he would live with Carly Simon for many years.

Taylor’s guitar style and the calming effect of his voice have melded into truly enchanting lullabies throughout his career. While “Sweet Baby James” was written for his namesake nephew, “You Can Close Your Eyes” serves as a palliative for long-distance lovers. Written for Joni Mitchell, it expresses how music can quell a broken heart and bridge the distance between people: “I don’t know no love songs / And I can’t sing the blues anymore / but I can sing this song / and you can sing this song, when I’m gone.” With its serene imagery and comforting melodic guitar, ‘You Can Close Your Eyes’ demonstrates the power of music over the human psyche. More specifically, it represents James Taylor’s ability to soothe the soul with his timeless music.

The big hit from the album was a cover of Carole King’s “You’ve Got a Friend.” Although the song belongs to King, it’s inextricably linked to Taylor. Carole has told James that the inspiration behind the song were his lyrics from “Fire and Rain”: “I’ve seen sunny days that I thought would never end / I’ve seen lonely times when I could not find a friend.” King’s song sonorously provided the friendship that he was seeking. James Taylor sings so earnestly; it’s almost as if he is your best friend for the duration of the song. While his rendition is similar to the Carole King version, what sets his apart is the sentimental guitar, and the harmonies provided by then-girlfriend, Joni Mitchell.

Each facet of the tune produced the full breadth of seasons mentioned in the chorus: from Joni’s frosted harmonies to James’ warm vocals. King’s Tapestry kept his album from the #1 spot, however, “You’ve Got a Friend,” became Taylor’s only #1 Pop single to date (although he did have various #1 hits on the Adult Contemporary charts).

James Taylor doesn’t just play the guitar; he performs duets with it. His guitar becomes another voice to be in conversation with as he harmonizes with it. The up-tempo love song, the traveling artist, the romantic escapist, the weepy country and western, and the lullaby are all showcased on this album. Being a landmark album in his career, 50 years later, we can celebrate finding each fractal of James Taylor’s songwriting diadem in Mud Slide Slim and The Blue Horizon.