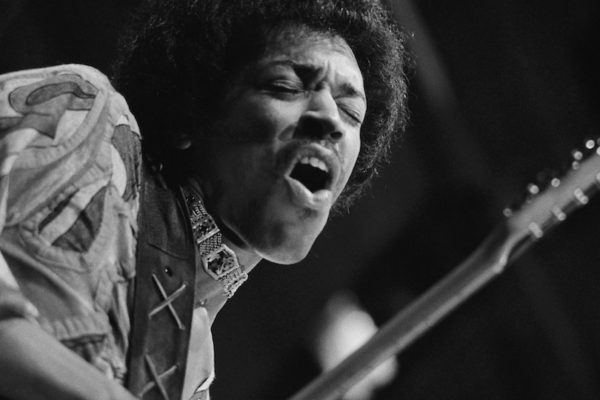 From the moment he exploded onto the international music scene in the mid-1960s, Jimi Hendrix was a visionary creative force whose influence can still be felt to this day. Besides redefining the sound of the electric guitar, his music encompassed a multitude of sounds and colors: he was a devout disciple of the blues tradition, his early sideman years grinding out one-nighters with the likes of the Isley Brothers and Little Richard left an indelible stamp of R&B and soul, and he was also a fearless improviser who reached for the sonic terrain of jazzers like Albert Ayler or John Coltrane (and notably gained the ongoing admiration of Miles Davis). Yet despite his rich musical vocabulary and his own heritage as a Black American, Jimi Hendrix has been primarily marketed to white audiences as a “rock” musician. Author Corey Washington sees this as a massive cultural misstep that has not only shortchanged Jimi’s legacy but has denied the Black community one of their rightful icons. His study of this puzzling disconnect led him to write his first book, Nobody Cages Me (2010), examining his own personal discovery of Hendrix’s genre-defying music.

“How Jimi Hendrix (May Have) Influenced ‘A Day In the Life'”

Washington’s second book, Jimi Hendrix – Black Legacy (A Dream Deferred), goes even deeper, featuring interviews with dozens of Hendrix associates, family members, and enthusiasts, as well as detailed analyses of the multiple strands of Hendrix’s unique artistry. Black Legacy is now in its second edition, featuring a striking new cover photo of Jimi as well as additional commentary from Band of Gypsys bassist Billy Cox regarding the BOG’s 2019 induction into the R&B Hall of Fame. As we approach the 50th anniversary of Jimi’s untimely (and mysterious) death, and as the United States continues to grapple with the harsh realities of our racial divide, it has never been a better time to reexamine Jimi Hendrix’s multifaceted cultural footprint. I spoke with author Washington about the book, and his ongoing efforts to uphold what he refers to as Jimi Hendrix’s “Black Music Legacy.” Comments have been edited and condensed for brevity and clarity.

There have been many books written about Jimi Hendrix over the years. What are some of the most common misconceptions about Jimi that you’d like to see corrected?

Whenever I interviewed people, whether it was (percussionist) Juma Sultan (who played with Jimi at Woodstock) or TaharQa Aleem, one of the Ghetto Fighters, they would always stress that Jimi Hendrix was not some strung-out “drug addict.” He might have had a few bad moments, but he was never too out of it to get his stuff done. The other misconception was that Jimi was not proud of his Black heritage; they try to make him out to be Native American, but in the context of how he lived his life from day to day, he was a Black man. When cops would stop him in the deep south and see him with white women, there was an automatic disdain: they didn’t see a Native American with a white woman, they saw a Black guy with a white woman. There were always incidents where he would have to live his life as a Black man. When Martin Luther King was assassinated, we only know of two people that performed (that night): James Brown, and Jimi Hendrix. James Brown’s concert was on TV in Boston and they documented it, but we don’t get to see Jimi Hendrix’s concert in Newark (that same night). There’s a lot of stuff that he did that we don’t get to see, like his free concert in Harlem (September 5, 1969, a benefit for the United Block Association). If we would have seen these things, I think it would have changed how the African-American community views Jimi Hendrix.

What was your own experience discovering Jimi Hendrix’s music?

I grew up in New York City with disco, house music, and hip hop; in my neighborhood, nobody talked about Jimi Hendrix. Whenever I saw clips of him it was always in the context of “hippies,” Monterey and Woodstock. Myself and many African-Americans, we never saw him with the Band of Gypsys, or in his early R&B days. But I was a big wrestling fan, and when Hulk Hogan started with the NWO (in the 90s) his new entrance theme was “Voodoo Child (Slight Return).” It started off with that wah-wah scratch, and I thought “Man, what is that? I gotta get that song!” So I went to the record store and got the Hendrix album I saw that had “Voodoo Child,” and it was actually Blues (1994 compilation); the “Voodoo Child” on that was an old blues version. So my first immersion into Jimi Hendrix was actually his blues playing, and that blew me away because I always thought he was “psychedelic rock.”

I found out later that the rock version was on Electric Ladyland, and when I got that (album) I was blown even further away! It was like a never-ending journey with all types of genres blended and fused together. I was 21 or 22, and the timing was excellent because the family was making a big push with his music then. (Note: Experience Hendrix, LLC was formed in 1995 by Jimi’s father, Al Hendrix, to manage his son’s recorded legacy.) They had just put out the one that he intended as a double album (First Rays Of The New Rising Sun, 1997), and South Saturn Delta (1997); all this stuff was coming out at the time I was discovering him. Then I started getting into all the bootlegs, Band Of Gypsys, I couldn’t get enough.

If you had to introduce Jimi Hendrix’s music to someone who’s never heard of him, what would you recommend to start with?

I think the easy way to go would be the Band Of Gypsys album, but depending on the person it could also be Electric Ladyland. And don’t sleep on his work with Curtis Knight; a lot of that stuff was funky and progressive, more than what they were doing with Motown and stuff like that. Jimi in that context on his guitar was showing signs of brilliance back in ’66.

Had Jimi lived past 1970, how might he have connected with the Black community, musically and otherwise?

I think he probably would have toed the line, but still branched out further into R&B and funk. I think Jimi would have really enjoyed seeing what people like Ernie Isley did, and Eddie Hazel from Funkadelic: they transformed that sound and put “rock” (guitar) solos within the context of R&B music. So you can imagine how Jimi would have collaborated with just those two guys. And you’re not even talking about all the obscure funk people, and of course, you can fast forward to Prince and Purple Rain…all these Black R&B artists started to incorporate Jimi’s style into their music. I think that (his influence) would have become even more pronounced if he had lived, (and he could) participate in that.

Why do you think Jimi wasn’t fully embraced by Black audiences? In fact, musician Daryl Dogan states in your book that at one time there was even a “stigma” attached to Black people who listened to Jimi Hendrix.

I think (Darryl) was looking through the lens of the late 60s and the Black Power movement when a lot of people viewed Hendrix as “white people music.” If you were listening to (him) and not James Brown, Motown, and soul, you were a “wannabe.” But by the time I came on the scene, most of (my peers) were geared toward R&B and rap. We didn’t know that Jimi was involved in one of the first “free rap” recordings with “Doriella Du Fontaine” (featuring Last Poets member Lightnin’ Rod), or that he was being sampled by Tribe Called Quest and Digital Underground. It’s changed; I see more young black people in to Hendrix now (thanks to) marketing from the family, plus a lot of the rappers speaking out about Hendrix, like Drake. There’s a rapper named Future, and he calls himself “Future Hendrix!” (Note: Future’s sixth studio album is entitled Hndrxx.) I’m a teacher as well, and when one of my students found out I wrote a book about “Hendrix” he said, “Oh yeah, that’s my favorite rapper!” (laughs) But that kid I spoke to did his research, he showed some interest and he knew a little something.

This second edition of your book appears at a revolutionary time in our nation’s history; the Black Lives Matter movement has precipitated a societal reckoning, with systemic racism being confronted head-on. How do you view Jimi Hendrix’s legacy and his music in relation to this moment? Could he serve as a unifying figure?

Jimi Hendrix was looking to bring all races together: he wanted to see multi-racial faces in the concerts, and he was trying to incorporate more people of color into what he was doing. Then you look at what he did with the national anthem (at Woodstock): he was using his music to protest, but not in a distasteful way. He was being honest and truthful about the position the country was in, and you could really magnify that and see how he was right.

That performance actually caught the attention of COINTELPRO (the FBI’s covert surveillance program), and he didn’t say or sing a word; it was just the melody on his guitar!

Yep, that put him on the list for surveillance. This was during the Vietnam War, and “Machine Gun” is an even stronger protest song against war in general: how people on both sides are pitted against each other, and the ones in control are not normal people like us. He was already doing what Kaepernick and all these people were doing! So I think Jimi Hendrix will be seen as a visionary; I can’t think of another artist that has the ability to draw in as many white people as Black people; he was the first to really do it like that, and on his own terms.

2 comments on “Jimi Hendrix and His “Black Legacy””