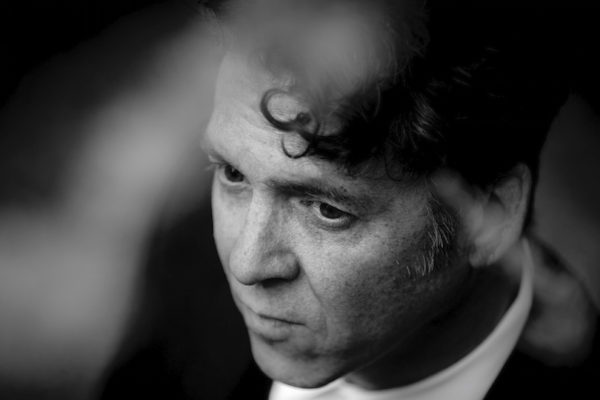 “I wanted sounds to be not just captured, but liberated,” says Joe Henry on the creation process for his new album, Thrum. That ethos found the veteran singer-songwriter taking an unconventional approach to the recording sessions; the result is a set of songs that feel not like audio verite documents, but like living, breathing organisms capable of clambering out of the album and occupying the same physical space as the listener. And while his penchant for poetic lyricism has remained consistent, his musical framework has evolved over the years, from elaborately produced folk rock to Jayhawks-backed alt-country and ultimately to a quirky, unpredictable approach full of sonic left turns. But the making of Thrum marks possibly his biggest left turn to date.

“We were mixing it in real time as we performed it,” explains Henry. “I record [live in the studio] like this all the time, without the idea of mixing as it’s happening. But I wanted to get back to the absolute immediacy of those kind of commitments.” Henry urged his longtime engineer Ryan Freeland to not just capture the sounds happening in the studio, but to transform them, on the fly, effectively becoming as much of an improviser as anybody the band, if not more so.

“I was explaining how we might work on the new album to Ryan by playing him a live Ray Charles record from 1964 in Los Angeles,” Henry relates, “where whoever’s recording Ray in the mobile truck is completely unprepared for the volatility of his voice, and frequently when Ray really hit something hard as a singer it distorts like a guitar through an amplifier. And I said, ‘I want my voice to live on that edge, I want that to be the sound of this record, that my voice is threatening to be uncontained, is threatening to distort with the drama of any given song.'”

A perfect example of this process is the beginning of “Dark Is Light Enough,” where Henry’s son Levon is playing reeds that take on an otherworldly tone and nearly take over the track before slipping back into the mix. “He’s either on tenor saxophone or bass clarinet,” recalls Henry, “what you hear there is his satisfaction at the way things were getting blurred and abstracted. That’s my favorite thing always, when something happens in a record and as a listener you’re disoriented by it, it jars you out of complacency. It’s really seductive to have sound happen to you and you’re free of imagining what it took to make that sound; it sounds like weather.”

Of course Thrum is far from the first time Henry has engaged in unorthodox methods. “When I was making my album Civilians,” he remembers, “I had just been given as a gift a book of photographs by the great photographer, filmmaker, and musician John Cohen. There’s a photograph in the middle of that book of the artist Mary Frank, who was married to the photographer Robert Frank, photographed in the back of a horse-drawn taxi in New York City. I wound up using it for the album cover, but I didn’t know that at this moment. But the first day we began that record, I opened that book in the studio and said, ‘You see this picture? This is what this record sounds like.'”

But Henry has become at least as well known as a producer for other artists, earning multiple Grammys and being nominated for several more. And while he’s worked with everyone from The Carolina Chocolate Drops to Me’Shell Ndegeocello, Henry has earned the most attention for overseeing albums by such august figures as Mose Allison, Solomon Burke, Allen Toussaint, and Ramblin’ Jack Elliott.

“It’s a tremendous honor to be in partnership and in service to artists who have been so important to so many of us for so long,” says Henry. “I didn’t ever have a notion that ‘I’m gonna make my bones working with legacy artists.’ I had a deep interest in artists that survive. I want to know what artists with experience have to say. I want to know what living longer does to the point of view of a great artist and what they have to tell us about that journey.”

Henry won his first Grammy for producing soul giant Solomon Burke’s 2002 comeback, Don’t Give Up On Me. “I got asked to produce Solomon Burke seemingly out of the blue and very early in my production life,” he recalls. “It was a really intense rite of passage for me. I felt deeply honored to stand with Solomon, as I did with Bettye [LaVette] and Mavis Staples and Irma Thomas and Allen Toussaint, and Billy Preston, and Harry Belafonte, and Mose Allison, etc. and try to help them imagine how they could both be faithful to their legacy and yet not be trapped by it.”

It’s a tricky dance trying to find the perfect balance between honoring an artist’s history and giving them a vivid framework, but Henry’s got a bead on it. “Irma Thomas is allowed to use her vocabulary that she helped invent,” he says, offering his work with the New Orleans R&B queen as an example. “It doesn’t necessarily equate to nostalgia that she’s speaking from a place of authority with a vocabulary that we recognize as stretching back to the beginning of her creative life. You want to take this old language, but you always want to be speaking in the present tense with it.”

Though he’ll be touring in support of Thrum throughout the winter, the tireless Henry’s got other projects in the works too, including production on what Joan Baez, 77, has stated will be her final album. But whether he’s working on his own material or anybody else’s, Henry’s all about capturing lightning in a bottle, and being “in the moment” enough to make some real magic happen in the studio.

“Invariably, there’s a moment [in a session] when people are no longer reading charts,” he explains, “they’re listening to each other intensely to hear what is happening to them—not what they’re doing to the song but what the song is doing to everybody in real time. The song has taken over. I don’t have musicians in the room just because of the instruments they play. I invite people in the room because I want their experience. I want their imagination in all ways.”

PS. Another artist who had a gift for collaboration….and a look at one of Joe’s artistic partners.