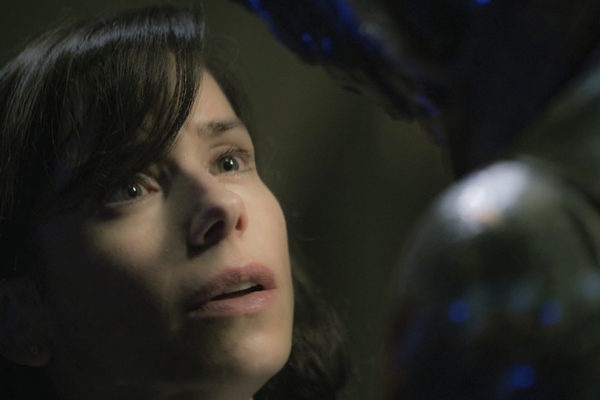 Guillermo Del Toro’s latest film, The Shape of Water, is part creature-feature, part fairy-tale and altogether a wholly wonderful piece of cinema. This distinctive genre auteur has contributed timeless classics like The Devil’s Backbone, Pan’s Labyrinth and even the superhero flick Hellboy, all of which have established him as one of the world’s finest moviemakers. And luckily for us, Del Toro’s latest offering – which just picked up fourteen Critic’s Choice award nominations — is a return to what he does best: a dark, deeply humane fantasy that is touching in its empathy and striking in its sheer beauty.

Set against the backdrop of Cold-War era Baltimore, The Shape of Water is a swooning love story with a beauty-and-beast fable at its core. Elisa (Sally Hawkins) is a mute cleaning lady who works at a military research facility with her friend Zelda (Octavia Spencer) who diligently punches in the morning time card for her perpetually late co-worker. Elisa’s days are marked by routine monotony: waking up early, making hard-boiled eggs for lunch, pleasuring herself in the bathtub, and visiting her next-door neighbor Giles (Richard Jenkins), a closeted gay artist, whom she communicates with via sign language.

Everything changes though with the arrival of Col. Strickland (Michael Shannon) and his newest find — an aquatic man-creature captured from the Amazon and known as “The Asset” (Doug Jones). Strickland sees the creature as a threat to national security, afraid that the Soviets might attempt to steal it to use as a weapon against them. This paranoia is not far from the truth, and we soon discover that double-agent Dr. Hoffstetler (Michael Stuhlbarg) who is overseeing Strickland’s work with the piscine beast, has his own intentions regarding The Asset’s fate. Meanwhile, Elisa quickly forms a friendship with the merman, seeing the creature as a fellow being rather than just a lab experiment. Sharing her boiled eggs and playing Benny Goodman records to him while no one is around, the amicable bond she creates soon turns into a deep, loving relationship. With the threat of The Asset’s extermination looming, Elisa enlists the help of her misfit friends to carry out a Free Willy-style rescue mission before it’s too late.

Although the narrative might seem simplistic, the story unfolds through a series of intertwining plot lines that showcase an ensemble of wonderfully drawn characters. Being a period piece, the film is laced with a political undercurrent that seems quietly astute for the age we are living in; issues of bigotry and sexism enter into the film’s conversation, as does the question of what being a “monster” really means.

The movie cleverly subverts any Stockholm Syndrome problems at the core of the usual Beauty and the Beast-type tales, by having Elisa initiate the courtship with the caged creature. The love that forms between Elisa and the merman is carefully portrayed with a romantic sensibility that is striking in its sincerity and treated with a careful poignancy that overturns any concerns we might have about such a romance. Because she is mute, Elisa describes herself as feeling “incomplete” and less than human, which is why her attraction for the creature stems more from a sense of recognition than sheer curiosity. Theirs is a love that transcends language and which is firmly rooted in empathy.

The inevitable question: Do they consummate their affair? Well, in a word, yes. However, the way in which the curious couple deepen their emotional and physical bond is so humane that it has an overall feeling of pure visual poetry that is both viscerally moving and tenderly beautiful. Indeed, the entirety of the film is striking in its surreal lushness, with murky shadows and vivid colors playing in tandem across the screen in a way that engulfs the senses and transports the imagination to a murky, fantastical world straight out of Del Toro’s mind. The director has clearly collected elements of his favorite comics, old movies, and mythic archetypes and transposed them against his own restless imagination in order to give life to a truly singular love story.

Because the two leads aren’t able to speak in their roles, actors Hawkins and Jones rely on masterful physicality to deliver outstanding performances that are as soulful as they are skilled. Hawkins uses only her body and her facial expressions to communicate, with a Chaplin-esque elegance that is stunning in its quiet earnestness. Michael Shannon also triumphs in his role as the truly monstrous villain. What could have easily been a caricature is instead elevated to a complicated, deeply problematic character thanks to Shannon’s sheer intensity, and the unsettledness that he brings to the role.

The Shape of Water is a return to the type of fantasy that Del Toro’s visual artistry thrives best in, and its languorous pacing allows for every inch of the screen to be soaked up in all its fantastically noir glory. This is a true feast for the eyes! While it might be seen as resembling films such as King Kong or The Creature from the Black Lagoon, The Shape of Water is definitely a movie that can be celebrated for its originality. More than anything, this final product is a call to love — in all of its forms.

Photo Credit: Image of The Shape of Water courtesy of Fox Searchlight

0 comments on “Guillermo Del Toro’s “The Shape of Water”: A Fairy Tale for Our Time”