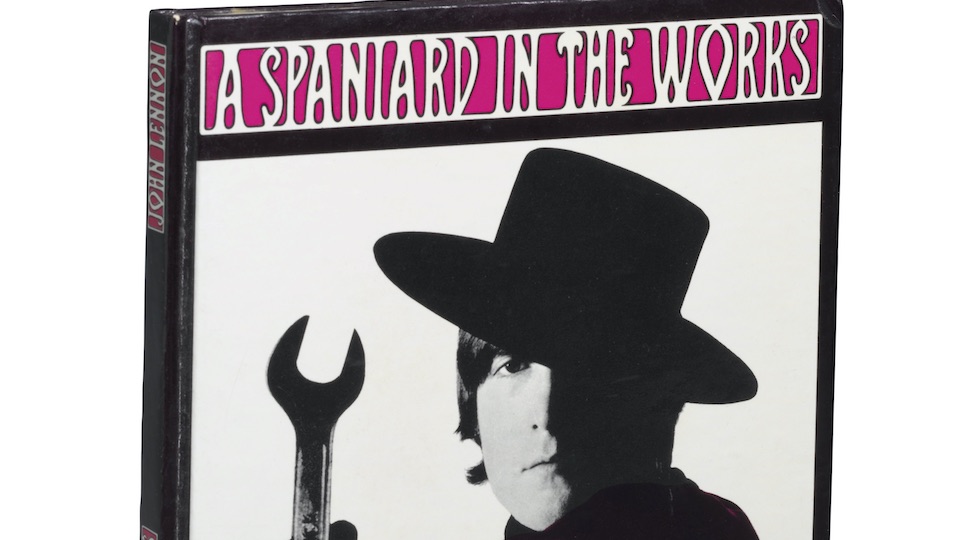 In June of 1965, John Lennon released his second heralded book of poetry and prose, A Spaniard in the Works. It followed hot on the heels of his 1964 collection entitled In His Own Write, which had captured the Foyles Literary Award for the year’s best literary work in Britain.

John penned both books despite his manager Brian Epstein’s fervent belief that John had “more than enough on his plate with writing songs, starring in award-winning films, giving concerts, and appearing on radio, television, and the news.” Indeed, Epstein strongly felt that John should have been fulfilled and happy composing and recording music and releasing LPs that soared instantly to Number One!

But John loved to write. When, in 1965, interviewer Kenneth Alsop asked John which medium the Beatle would select if he had to choose between singing or writing, John promptly gave writing the nod. He said that he had been writing long before music came along. And truth told, at 5 years of age, young John Lennon had penned a serial book of “continuing stores” collected under the title of Sport and Speed Illustrated.

“There isn’t a time,” John once commented, “that I’m not writing, almost.” It was his passion.

1964 North American Tour stewardess Betty Birdsall told me that she clearly remembered John carrying torn slips of paper in his right suit pocket. “He would remove one,” she described, “and scribble an overheard line of conversation or a witty quip onto the paper. Then he’d put that scrap into his left pocket, jealously guarding it. He just loved to read, to listen, to collect ideas, and to write.”

Nevertheless, 1965’s A Spaniard in the Works was a most difficult creation for John. In fact, he admitted in several interviews that he only completed the book with the help of a bottle of Johnnie Walker Red. What made Lennon’s second volume so much more taxing than his first assembly of irreverent, witty, clever, and deeply symbolic poems and stories? Well, here is a glimpse into what transpired via Vol. 5 in The John Lennon Series, Shades of Life, Part 1.

In the wake of the rather unanticipated success of In His Own Write (Well, John had guessed it would sell to fans, but never imagined it would be lauded by critics!), John had contracted with Tom Maschler of Jonathan Cape Publishers to write a sequel. And although his learned Aunt Mimi was thrilled at the prospect of her nephew’s second book, she had nothing more to give him in the way of childhood or teenaged scribblings. John had depleted her stockroom of college poems and prose for his first volume.

In desperation, John had cajoled his mate Bill Harry into helping him round up “any titbits anyone has ’round Liverpool,” especially any work left behind with Stu Sutcliffe and Rod Murray in Rod’s Gambier Terrace art college lodgings. But Rod, for his part, was reticent to help “that Lennon.”

“I’ll be more ’n happy to give him back his Daily Whatever sketchbook, Bill,” Rod had explained, “when ’n if he pays me the remainder of the rent he owes me, on the unceremonious occasion o’ his movin’ out o’ the flat all the sudden, like! I mean, look, Stu’s mum, Millie, gave me Stu’s part o’ the rent, as it were. But John…well, he never followed through, ’n he can, without a doubt, these days, can’t he?! But have I seen a pound from him? Not yet!”

So, Bill immediately rang Epstein with this information, giving The Beatles’ manager Rod Murray’s Liverpool address and imploring Epstein to intervene on John’s behalf. But as far as Bill could ascertain, no action had ever been taken to procure John’s poetry and prose.

To make matters worse, several years earlier, when Bill and his wife, Virginia, had moved their Mersey Beat newspaper offices to a new Liverpool location, a full box of John’s writings had been inadvertently mislaid. Although John had wept on Virginia’s shoulder over the irreplaceable loss, his tears had restored nothing. The scores of precious scribblings were never again recovered.

So, faced with the task of compiling a new book utterly from scratch — without any former texts to fill the pages — John felt pressured to write (or try to write) in every spare moment. In fact, on 15 December 1964, when the deadline for turning in his completed manuscript passed unheeded, John began to fret. He despised failing at anything.

Last April, on holiday aboard the ramshackle Tahitian “yacht” that Cyn and he had shared with George Harrison and Pattie Boyd, John had amused them all with the cheeky tale of “Snore Wife and Some Several Dwarts.” And one particularly sweltering afternoon in the ocean doldrums, he’d recruited George to help him concoct “The Singularge Experience of Miss Anne Duffield.”

When a Daily Mirror columnist named Cassandra brashly panned The Beatles, John was inspired to create the snarky piece “Cassandle.” Joyfully lampooning the Mirror journalist as “a boring, owld gassbag” [sic], John feigned commiseration with Cassandle — whose awful job it was to review “sleasy backward, bad, deaf monkeys parsing as entertainers, with their [sic] FLOPTOPPED hair, falling about the place like Mary PICKFORD.”

Then, during Britain’s stirring autumn national elections, John had smiled and scribbled a bit called, “We must not forget…The General Erection”:

“Azue orl gnome, Harassed Wilsod won the General Erection, with a very small marjorie over the Torchies….Sir Alice Doubtless-Whom was — quote — ‘bitherly dithapointed’ but managed to keep smirking on his 500,000 acre estate in Scotland with a bit of fishing and that.”

John had sought (and found) subjects everywhere, in all seasons, at all hours. In the three newspapers that he hungrily consumed each morning, a daily advice column had inspired his cheeky “Readers Lettuce.” And backstage, during “Another Beatles Christmas Show” at the Hammersmith Odeon, whilst the other Beatles relaxed with “a cuppa” or took the occasional “spot o’ kip,” John was restlessly jotting on scraps of paper, worn envelopes, and torn advertisements.

When he wasn’t penning song lyrics, John was ginning out sardonic prose or bits of Lennonesque poetry. Often, the jibes were aimed directly at himself:

“He’s on a diet now you know

From eating far too much

They say if he gets fatter

He’ll have to wear a crutch.”

Most of the work was irreverent and extremely funny indeed — rattled off in spare moments under the duress of necessity. But sprinkled amongst the frivolity — carefully sequestered — there were dark moments of reflection that took even John’s breath away. There were stark revelations about himself that he thought no one would suss out, and if they did guess, they’d only pause momentarily and then (all too gladly) move on. After all, relatively no one had questioned his recent lyrics to “I’m a Loser.”

Hardly an eyebrow had lifted at the song’s pitiable confession. “This track could hardly be autobiographical,” the critics had assumed. “Why, John Lennon has the world at his fingertips! He’s practically king of everything!” No agonizing questions had been posed about John’s self-confidence; no one had plumbed the shallow waters of his self-esteem. They’d all just smiled at the hit number and sung along. No one wanted to know.

Now, John’s horrid, recurring childhood dream of falling into a deep and inescapable hole merged with the heart-rending, untimely death of his beloved Uncle George, revealed in the conclusion of John’s rather lengthy piece, “The Wumberlog (or the Magic Dog).” As the meandering tale of a lonely little boy seeking his lost uncle wound to an end, a startling image emerged…a scene that finds the child and his uncle being buried alive, up to their necks, by an unfeeling, unruly mob:

“Without a word, and spades on high,

They all dug deep and low,

And placed the boy into a hole

Next to his Uncle Joe.”

John wrote furiously, his pen scritching across the rough newsprint and rapidly bleeding ink. Tugged into the unhappy world of the long-ago, John stood feebly, watching his childhood perish alongside his Uncle Ge’rge, watching faith and justice be swallowed up whole. He blinked, several times…but there it was again: the unspeakable sadness, the impossibility of recovery or of ever being the same again. John saw it all, unable to alter a thing.

His uncle said, all sad.

All at once, John was fourteen-and-a-half…home from Scotland, facing his aunt at the Mendips kitchen sink. Mimi, peeling carrots. Mimi, delivering the irreversible news: “Your uncle has died, John.” Mimi, maintaining a brave face in front of the boarders. Mimi expecting John to do the same…at least, until he reached his room.

And later…much later — too late, really — there was his mother Julia knocking on his bedroom door. Julia, sitting on the bed. Julia, fighting to stave off John’s hysteria; Julia, battling to keep her son alive.

“With just their heads above the ground

They bade a fond goodbye,

With all the people shouting out,

(And there certainly was.)”

No one (John knew) would surmise the story behind the story. They’d think this just another ghastly ditty from “that bizarre Beatle’s mind.” Few would ever follow the dots. And those who could, wouldn’t dare.

And so, John left the poem’s ghastly ending on the page for Tom Maschler to read…for Tom and all the others. And turning his attention to the single-line illustrations, John sketched himself small and simple and hiding behind his Uncle Ge’rge — helpless hands raised in fruitless supplication.

With the self-same determination that permitted The Beatles to make their first LP, Please Please Me, in one day…with the same focus that enabled John to write hundreds of hit songs and create a traveling art gallery that still amazes viewers worldwide, he completed A Spaniard in the Works for release in June 1965. He finished the book while making the United Artists film, “Help!” and recording the accompanying soundtrack. He completed it while starring on numerous television shows and radio broadcasts, giving endless interviews, and dealing with marital struggles and the reappearance of his long-lost father, Fred. John’s second book, though not as highly decorated as his first, was a treasure trove of scornful humor, tongue-in-cheek observations, and thinly-veiled Lennon biography. To learn more about A Spaniard in the Works and John’s life in the challenging year of 1965, read Vol. 5 in The John Lennon Series, Shades of Life, Part 1, found at https://www.johnlennonseries.com