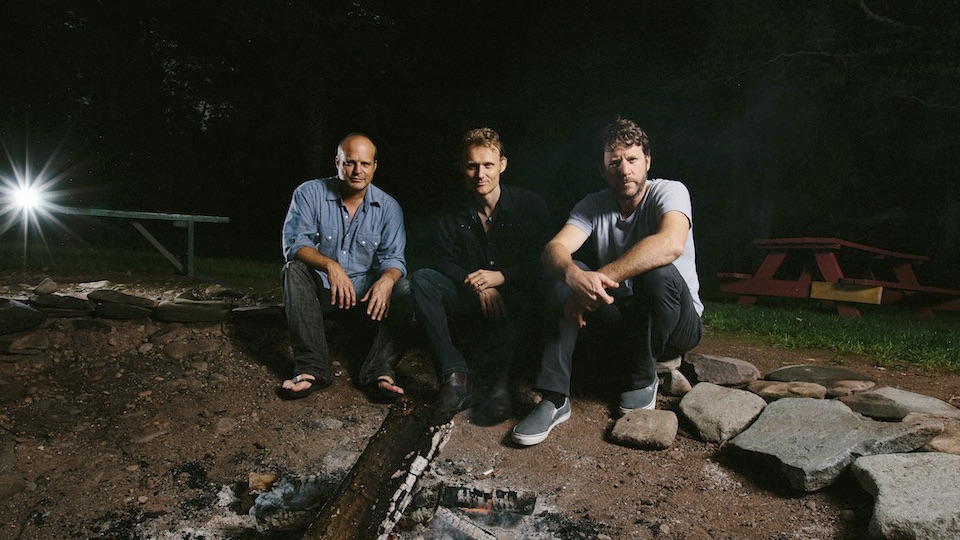 Composer-keyboardist John Medeski is having quite an autumn this year: Omnisphere, a live album from his experimental jazz-funk trio Medeski Martin & Wood with the chamber orchestra Alarm Will Sound, came out in mid-September while the self-titled debut release of Mad Skillet — his band with guitarist Will Bernard, sousaphonist Kirk Joseph, and drummer Terence Higgins — will arrive in November. Between his recent trip to Japan and his upcoming tour with Mad Skillet, this great improviser stopped long enough to answer some questions for CultureSonar on his currently prodigious musical output. We hope he took a deep breath afterwards.

Q: Do you have a favorite piece or album by Alarm Will Sound?

A: I’m not a “this is my favorite” kind of guy. I like a lot of things, a lot of music. I don’t have a favorite band or musician or kind of food. The musicians I love, I tend to like everything they do, even if I don’t like it…ha!! Alarm Will Sound has a lot of good recordings. But Acoustica is a good one to check out. They’re performing the music of Aphex Twin. Also Splitting Adams which is the music of John Adams.

Related: “Your Blind Date with Beethoven”

Q: Given that the collaborative Omnisphere is a live album, are there any pieces that ended up on the cutting room floor? Or is this a complete document of the full concert? Anything memorable to share about the live experience that we can’t hear on the recording?

A: I believe this recording has all of the material that we played in Colorado. The only thing that isn’t included is Alarm Will Sound playing “End of the World Party” without us. Seemed redundant to have it on the recording twice. Any live experience has many dimensions to it that can’t be recorded. For me, watching Alan, the conductor, cue the improvised backgrounds during “Eye of Ra” was filled with a uniquely live energy. The excitement of seeing a large ensemble following the commands and in the moment choices of their conductor can’t really be captured in an audio recording. While we can feel musician’s connections on a recording, witnessing the eye contact and interaction is something you can’t hear on the recording.

Q: You actually revisit two old compositions “End of the World Party” and “Anonymous Skulls” on Omnisphere, with the latter in particular having a distinctly new sound. How strange was it to play someone else’s orchestration of your own work? What was that like?

A: It was great for us. Both of those songs have multiple keyboard overdubs so we have had to reinvent them to play them live as a trio. Alarm Will Sound was able to capture all of the parts, many that were string and vocal sounds on the mellotron, and bring these tunes to life in a way that represented the original recording but added a whole different personality or many personalities!

Q: You’ve periodically collaborated with musicians such as guitarists John Scofield, Chris Whitley, and Nels Cline but given that Alarm Will Sound has about 20 musicians, was there an instrument that you really enjoyed hearing that you don’t use regularly in your own work?

A: It’s been a dream of ours for years to work with an orchestra or large ensemble. We’ve used horn sections and a string section before, but never a collaboration like this. It’s hard to pick one instrument specifically. It’s really the color combinations available with a large group that is so inspiring for us. The reason I have used all of those different keyboards is to add new colors and create different dimensions in the music. I’m not at all an electronics expert—I just like good sounds that I can make music with. So, having all of the instruments in Alarm Will Sound with all of the possible combinations available is awesome. This recording is just the tip of the iceberg.

Q: Over the years, Medeski Martin & Wood has taken on composers as varied as Duke Ellington (“Caravan”), Bob Marley (“Lively Up Yourself”), Sly Stone (“Everyday People”), and John Zorn (the album “Zaebos”). Is there anyone from the world of country music you’d like to try on?

A: Well, I’m sure each of us has our answer. For me, it’s Willie Nelson. I recorded a tune of his on my solo record. Maybe we’ll finally do that Willie tribute album: On the Rhodes Again.

Q: You’ve even put your own stamp on the Beatles’ “Julia” while Alarm Will Sound has tackled “Revolution 9.” If you could pick another song by the Fab Four to play together, what might that be and why?

A: Hmmm… There are so many. Probably not going to happen, but maybe a slower darker abstracted version of “For No One,” melding Emmylou Harris’ version into it, as well. Or “Sun King” or “Her Majesty” as a launching pad for a harmolodic Ivesian explosion or an organ boogaloo version of “Here There and Everywhere” for an obvious one. You should check out the version of “Golden Slumbers” we did with KD Lang for the Happy Feet soundtrack album.

Q: Can you imagine performing a stripped down version of the opening track “Kid Tao Mammal (Unworldliness Weirdo)” without Alarm Will Sound? Or is this piece banned from your set list without them?

A: Nothing is banned from our set lists, in theory, but some things just don’t seem to make it into our shows. Kid Tao is so reliant on the orchestration, in my opinion. The whole piece uses all of the instruments in a way that is key to each section. I don’t think it would translate to a trio. But now that I’ve said that, we’ll very likely try and do it.

Q: You’re also releasing your debut record with your band Mad Skillet. Do you have different objectives as a musician with this other enterprise?

A: The members of a band determine everything for me. Mad Skillet, by the nature of the musicians, is a New Orleans-influenced, groove-oriented band with endless possibilities to push things into expansive or psychedelic realms. It’s also worth mentioning that this project is supposed to be fun! No matter what situation I am playing in, my general approach is the same—I try to add something to what is happening that enhances or inspires, which could be a lot of things or nothing at all. The chemistry in Mad Skillet is pretty magical, very little needs to be said about the music. When we get together, music really is our common language.

0 comments on “John Medeski Is Having More Than a Moment”