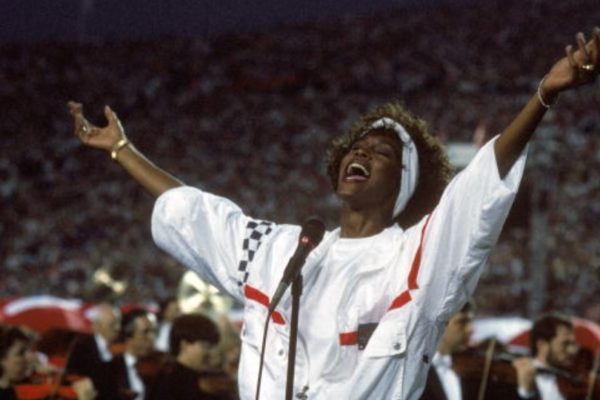 Today is the Fourth of July. That means the pomp and circumstance of parades, the smell of burnt hot dogs at family barbecues, the snap of unfurled flags and the salvo of fireworks. And each of these events gets even better when there’s a soundtrack involved. As you might expect, America’s birthday is honored across all musical genres — pop and rock very much included. For those who are assembling a playlist of tunes that celebrate the good ol’ USA, or for those who just want to listen and get that frisson of national pride, here are a few choice selections. And yes, we’re mentioning two unforgettable renditions of the “Star Spangled Banner.”

1. James Brown’s “Living in America” (1985)
This Grammy-winning confection is pure ecstasy, energy, and rhythm. The song was the main track for Rocky IV (1985), which introduced James Brown to a whole new generation of fans. Sung by the Godfather of Soul but written by Charlie Midnight and the late Dan Hartman (“Instant Replay,” “I Can Dream About You”), Brown’s upbeat track is even more exciting when you watch the video that weaves together shots of Sylvester Stallone, Dolph Lundgren, and Carl Weathers, with some staggering dance moves, a maestro horn section and a fabulous montage of our nation.

2. Ray Charles’ “America the Beautiful” (1972)
Ray was far from the first to record this homegrown standard, composed and written by Samuel A. Ward and Katherine Lee Bates in 1893. But this version has usurped all others to become the definitive rendition for decades, and often plays as a stirring set piece for fireworks displays around the country. No one else could’ve conjured this lovely piece into a glowing, gospel-flavored, passionate ode to America, an undisputed love song with an R&B twist. It will never cease to stir.

3. Neil Diamond’s “America” (1980)
Diamond’s deliciously bombastic homage to the immigrant experience, written as part of the soundtrack to 1980’s The Jazz Singer, has become a crowd-pleasing staple that’s popped up in promos for the 1996 Olympics, during Michael Dukakis’ 1988 presidential campaign and in slightly altered form after the September 11th tragedy. There’s a good reason Diamond’s concerts feature a giant American flag display when he sings, “Every time that flag’s unfurled / They’re coming to America.” This song is pure patriotism.

4. Whitney Houston’s “Star-Spangled Banner” (1991)
While many of us are still trying to reconcile Houston’s extraordinary chops, charisma, and legend with her sad and untimely death, there can be no doubt of this performance as part of her legacy. Originally sung during the opening of Super Bowl XXV in Tampa in 1991, her glorious handling of our National Anthem has been widely viewed as the gold standard, though many able artists have navigated it beautifully before and since. Her golden voice, passionate delivery, and gorgeous orchestral back-up make this one for the ages. Thank you, Whitney. We’re playing this and Jimi Hendrix’s redefinition on a loop all day.

5. Lynyrd Skynyrd’s “Red White and Blue” (2003)
Southern rockers Lynyrd Skynyrd gave tuneful voice to the heart of America, with their exhilarating ode to gritty, bottom-line American values. They raised spirits when they sang, “My hair’s turning white, my neck’s always been red, my collar’s still blue…we’ve always been here just trying to sing the truth to you.” Dropped on their 2003 album Vicious Cycle, this hit climbed to number 27 on the Billboard Mainstream Rock chart and added a warm, emotional track to their already crowded canon.

6. Don McLean’s “American Pie” (1971)
This oft-debated, occasionally mocked, and undeniably revered opus from folk-rock singer Don McLean’s 1971 album of the same name clocks in at over eight minutes and tells the tragic tale of the 1959 plane crash that took the lives of Buddy Holly, The Big Bopper, and Richie Valens. This horrible event — forever known as “The Day the Music Died” — not only pays homage to that poignant piece of history but also provides a sweeping look into a vintage America and a loss of innocence. One of its many aching lyrics sum things up thusly: “And the three men I admired most/The Father, Son and the Holy Ghost/They caught the last train for the coast/the day…the music died.”

7. Simon & Garfunkel’s “America” (1968)
A masterpiece from the legendary duo’s fourth album, Bookends, this soulful track also harkens back to a more untarnished time and brings with it the “loss of innocence” theme. Based upon a five-day road trip taken by Paul Simon and his girlfriend in 1964, the lyrics track the path of open-hearted exploration from giddy intimacy to disillusionment and, perhaps, wisdom for the next frontier. The tune made a welcome comeback in the 2000 flick Almost Famous, in which a daughter plays this song for her mother to explain why she is leaving the nest to become a stewardess.

8. Bruce Springsteen’s “Born in the USA” (1984)
The best-known track from Springsteen’s biggest-selling album, this Americana-tinged tune is different from most in that what appears madly flag-wavin’ at first glance is actually a bitter condemnation of the way Vietnam vets were treated upon their return. An indictment of a government that turned its back on soldiers, “Born in the USA” has been endlessly misread and misunderstood by many politicians who have attempted to trot it out as a patriotic anthem. Cease and desist letters come thick and fast from the Springsteen camp. He knows what it means and always stands up for the underdog.