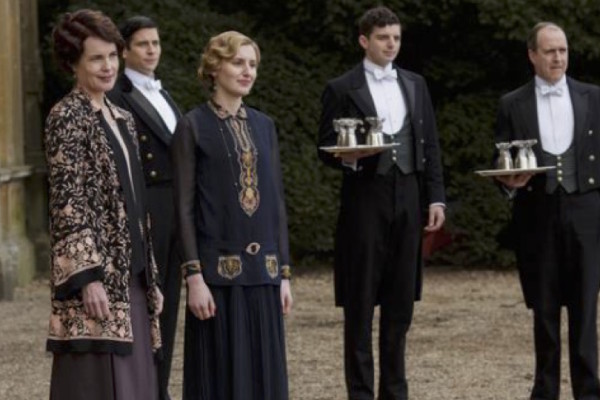 America’s favorite British soap opera is about to debut for the final time. Season six of Downton Abbey kicks off on PBS on Sunday, January 3rd and will conclude with a special 120-minute episode on March 6th. Unless you’ve been living under a rock for the past five years, you know all about the drama surrounding the Crawley family and their servants below stairs. The beloved series has given us classic stories and characters, from the delightfully snobbish Lady Mary to the constantly conniving Under Butler Thomas to the wonderfully witty Dowager Countess of Grantham (played by the amazing Maggie Smith). Over the first five seasons, we’ve followed the family and their workers through love and loss, scandal and intrigue, a World War and a society that is rapidly moving into modernity, however much Lord Grantham and Mr. Carson may wish otherwise! The final season promises more of what makes the show so appealing–the great characters, great dialogue, and incredible inter-mingling of life both upstairs and down.

So what can we expect in season six? Well, let’s catch you up on how season five left off. In the fall of 1924, the Crawley family headed to Northumberland for a shooting party with Lady Rose’s in-laws. While there, Lady Mary and Lady Edith were both introduced to eligible bachelors, a racecar driver and an estate agent respectively. But are these men the real deal for the Crawley girls? Only time will tell (their romances have certainly not been smooth ones!). And what about Edith’s “ward” (actually her daughter)? As more people learn her secret (her father and brother-in-law, Tom, are now in on it), can it be kept concealed? Elsewhere, the story surrounding the Dowager Countess and her relationship with a Russian Prince is wrapped up, while Cousin Isobel tells Lord Merton she cannot be with him as long as their pairing would cause a rift in his family. At Christmas, Tom leaves with little Sybbie for a new life in Boston.

Among the servants, there continues to be trouble for Anna and Bates. With Anna behind bars for the murder of her rapist, Mr. Green, Bates writes a letter confessing to the crime and then flees. He returns to Downton after being cleared (thanks to some detective work by Molesley and Baxter). But is the whole ugly episode behind them for good? Meanwhile, two other lovebirds from downstairs finally get engaged! In one of my favorite lines from the series, Mrs. Hughes accepts by saying “Of course I’ll marry you, you old booby. I thought you’d never ask!” So, that’s at least one wedding in season six!

These are only a few of the many twists and turns from season five that will be explored in the final outing at Downton, set in 1925. And now, time for a confession. I have seen the whole of the final season (thanks to my impatience and the power of the internet). I won’t reveal any spoilers, but I will say that for fans of Downton Abbey, there is plenty to look forward to. Though I know in my heart that it was probably the right time to close the curtains on this cultural phenomenon, I can’t say I won’t miss the Crawleys, their servants, and all the shenanigans. Indeed, it’s been a brilliant ride.

(And if you haven’t watched the series, what are you waiting for? Start binge-watching…now!)

Downton Abbey: The Final Season premieres on PBS on January 3rd at 9/8c.