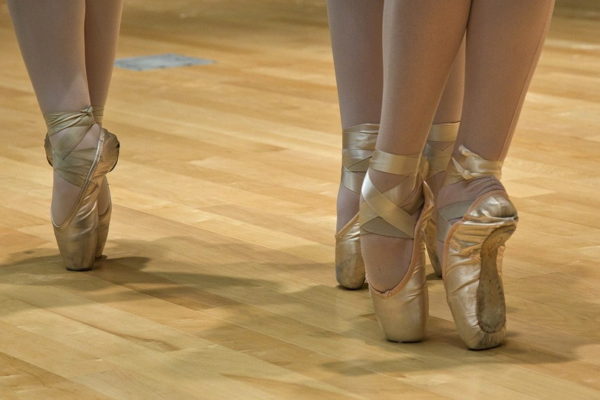 For dancers, pointe shoes are a tool, a source of frustration and pain, a symbol of the impossible quest for perfection. And they have an iconology all their own. The idea of rising to the tips of the toes became a “thing” in the mid 19th century when Marie Taglioni darned the ends of her soft slippers. That allowed her to seemingly “float” on the stage in the romantic ballets she was known for. It only lasted a few seconds, but the illusion made audiences lose their minds. Since then, the shoes have evolved to provide more support – and a bit less pain.

Modern pointe shoes are constructed from layers of glue and fabric, with a thin leather “shank” inside. Even though some parts of the process require a machine, they are among the last handmade things in the world. For dancers, finding their perfect shoe is almost a religious quest. “Capezio,” “Freed,” “Bloch”, “Grishko”: these are just some of the brand names thrown around by dancers in their search. And within each brand, there are varying styles, too.

For professionals, the process goes even farther: since pointe shoes are mostly hand-made, the dancer may seek out the “maker” at the factory (identified on the sole of the shoe with their own “mark.”) She will then order her shoes exclusively from him/her, asking for more customization. It’s like finding the Holy Grail, so it’s no surprise that ballerinas have been known to have epic freakouts when their maker retires.

Now with all that work, it’s kind of a shame that pointe shoes don’t last very long. When the dancer first gets their pretty, shiny shoes, they proceed to beat the crap out of them – literally. A small hammer is used to soften up the hard “toe box.” Shanks are ripped out, and the satiny ends of the shoes are either darned or scraped for more security. Each dancer has their little ritual.

Class, rehearsals, performances – professional dancers can blow through 3-4 pairs a week – or more. At some point, the sweat breaks things down which make them softer to dance in. But not long after, the shoe goes “dead.” A moment of silence, please.

So what happens to the hundreds and hundreds of pointe shoes going to the great beyond each week?

Some dancers are sentimental, and hang on to certain pairs from a special performance.

DIY types may decorate them or do other craft projects with them.

A lot of companies have found a revenue stream in selling the autographed pointe shoes of their dancers. Certain pairs will be noted as having been used in a rehearsal or performance of some important production. And these souvenirs ain’t cheap – expect to fork over a couple of hundred bucks for a pair signed by a principal.

Despite the fact that those pointe shoes are no longer functional, they lose none of their mystical power. In my old studio, a pair signed by Paloma Herrera of American Ballet Theatre hung on the wall, and I routinely touched the shoes ahead of performing a difficult combination. It did nothing to make it any easier, but it was a way to absorb some of the magic.

PS. While we are on the subject of dance, you might enjoy our other posts A Brilliant Dancer’s Next Steps, When a Ballerina Takes Off Her Tiara , Ballet Meets “Breaking Bad”, and Bolshoi Babylon: The Dark Side of the Dance World.

1 comment on “The Life and Death of a Pointe Shoe”