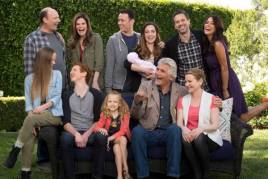 Meet the Shorts. They’re the decidedly quirky extended family that moved into the CBS lineup last year via the TV sitcom Life in Pieces. And before you start saying, “So what! Another situational comedy, what’s the big deal?” take note: There’s something fresh going on here as each episode is subdivided into a quartet of short stories that shift the show’s focus to different characters. Think Faulkner’s As I Lay Dying but funny. Actually, forget the Faulkner reference. Think Family Ties then imagine that each episode is broken down into four stories: one for Alex, one for Steve, one for Elyse, and one for Mallory. Far from being a Modern Family rip-off, the show uses its ADD structure to allow us to take a closer look at generational differences of perspective.

From its first episode, Life in Pieces defies convention: The pilot’s four subsections revolve around a first date, a birth, a tour of a college campus and a funeral. That’s like a whole life in 20-something minutes from the courtship that led to the baby right on to the death. But here again, things are not what they seem. That initial date takes place in a car since these millennials still live with their parents; the delivery finds some complications caused by a not-too-serious injury (rest assured, the baby is fine); and the college tour isn’t just one son’s coming of age – it’s also the coming of age of two daughters too as one has her first period and the other learns Santa isn’t real. As for the funeral, it’s a mock post-modern one hosted by grandpa in honor of his own 70th birthday. Sure, it’s a life but what an unusual one.

So who are the Shorts? Actually, more interesting would be to ask, who plays the Shorts because the talent pool here is impressive. James Brolin (who won two Golden Globes and an Emmy for Marcus Welby, M.D.) plays the cool, composed patriarch John Short; Dianne Wiest (two-time Oscar-winner for Hannah and her Sisters and Bullets over Broadway) plays his ex-wife, the therapist Dr. Joan who divorced him as a political statement in the ‘80s but still lives with him. The talent pool just gets deeper when you look at their children: The incredible Betsy Brandt (Breaking Bad) plays the oldest daughter, Heather, who’s an ENT doctor, Thomas Sadoski (The Newsroom) is the middle child, Matt, who’s recently divorced and Colin Hanks (Mad Men) plays the youngest, Greg, who works – for awhile at least –at a crowdfunding website.

If the next generation is played – naturally enough — by actors decidedly less well-known to the general public that’s to be expected. Indeed for actors Holly J. Barrett, Niall Cunningham, and Giselle Eisenberg, Life in Pieces marks their first major recurring role in a television series. But hasn’t part of the joy in being in a family always been watching the various ways the newest members evolve and grow? The future has always been with the young! And by the looks of it, Life in Pieces’ youngest stars are off to a stellar start. They’re also probably learning quite a bit from Josh Brolin’s dad and Tom Hanks’ son in the process. (You gotta love the casting agents for that one.)

0 comments on ““Life in Pieces”: A Postmodern Family”