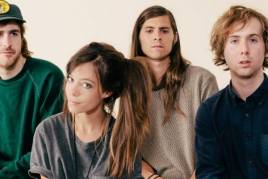 The early days of first-generation folk-rock, psychedelia, and vintage soul have receded rapidly in the rear-view mirror of time. But there are still plenty of artists out there making new music that incorporates the ethos of the era, a time when people opened their minds to all manner of musical possibilities and the counterculture rose up to its full height and wondrous glory. Some of these current artists are too young to remember the ’60s firsthand but they’ve nevertheless felt its influence; others were on-board for the first go-round and still have something fresh to say. Either way, they’re all unleashing new albums that prove the spirit of the ‘60s transcends time.

• Richard Barone‘s Sorrows & Promises: Greenwich Village in the 1960s
Barone initially came into the public eye as front-man for ‘80s new wave heroes The Bongos. Take note: He’s been a solo singer-songwriter longer than he was a Bongo. He’s called Greenwich Village home for quite some time, too, so it’s only natural for him to take a fond look back at some of his neighborhood’s most revered songwriting alumni, like Tim Hardin, Phil Ochs, Fred Neil, Richard Farina, and some guy named Dylan — all of whom fused folk with personal poetry to forge a new musical path. Barone covers the early works of the aforementioned artists and more, often with illuminating reinventions.

• Quilt‘s Plaza
The hazy, heady sound of Boston-based indie rockers Quilt is full of allusions to the Bay Area scene that brought the world Jefferson Airplane, the Grateful Dead, Country Joe & The Fish, et al. And on their third album, the band doesn’t shy away from those psychedelic sources of inspiration; from front-woman Anna Fox Rochinski’s otherworldly croon to guitarist Shane Butler’s aqueous, trippy tones, the ‘60s are felt in full. That said, Quilt makes a clear effort to inject a little more modernity into the proceedings so Plaza feels very much “of the moment.”

• Lee Fields‘s Special Night
The Age of Aquarius wasn’t just about acoustic guitar-wielding folkies and psychedelic warriors. Lee Fields remembers that the‘60s had soul. Alongside peers like Sharon Jones and Charles Bradley, he’s been fanning the flames of old-school R&B for years. And while his new record is totally contemporary in its energy and intention, it bears the unmistakable mark of an era when James Brown, Otis Redding, and Bobby Womack were burning their names into the pantheon of American music.

• David Crosby‘s Lighthouse
Nobody personifies the open-minded, searching spirit of the ‘60s more than David Crosby, whose innovations with The Byrds and Crosby, Stills & Nash opened up new artistic vistas we’re still exploring today. At 75, he’s continued to make inspired music with those peerless, velvety pipes of his. Lighthouse, his latest solo album, is a spare, acoustic-based affair full of quietly fluid tunes that hearken back to the glory days of “Guinnevere” and “Déjà Vu” more than anything he’s done in decades.

• Wolf People‘s Ruins
When it comes to British band Wolf People’s influences, there are two wings: the hard-rocking, blistering-guitar sturm-und-drang of ’70s Brits like The Groundhogs and Wishbone Ash, and the folky/psych/proto-prog excursions of late-’60s explorers like Traffic, early Jethro Tull, and Fairport Convention. Both of those elements are in effect on the band’s fourth album. But they tear into the tunes on Ruins with such ferocity that it’s impossible to perceive these tracks as emerging from anything but a very urgent present moment.