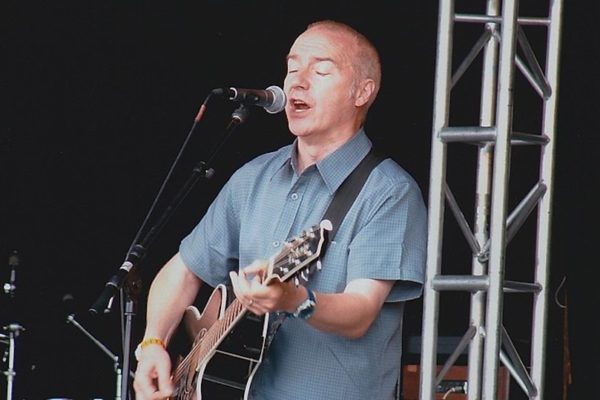 What do you do after organizing one of the biggest concerts in history? And you’re barely into your 30s? This is what singer/guitarist Midge Ure had to wrestle with after Live Aid – and he’s reinvented himself in some interesting ways. Midge (a cute backwards version of his real name, “Jim”) Ure was having a pretty nice career in the ‘70s and ‘80s, playing in bands including Thin Lizzy, and later, fronting one of the more interesting groups of the time, Ultravox. In 1984, he was rehearsing with the band for a TV appearance, when he got a call at the studio from his friend, Bob Geldof. Geldof had just seen a disturbing news report on the Ethiopian famine. That phone conversation became the seed for Band Aid, the first charity “super group.”

Ure sat at his kitchen table and worked out the melody to a single, “Do They Know It’s Christmas?” (Geldof wrote the lyrics). The record sold 3.7 million copies in the UK and remains the second highest-charting single in UK chart history. The accompanying video, featuring a variety of ’80s pop stars performing in the studio, soon inspired an even bigger effort: the dual Live Aid concerts.

Geldof and Ure coordinated what they called a “global jukebox” on July 13, 1985, with dozens of artists performing in London and Philadelphia. Madonna, U2, Dire Straits, Queen, David Bowie, The Who, The Pretenders, the surviving members of Led Zeppelin…it was THE event of the 80s. Almost 2 billion people tuned in to the broadcast, and over $125 million was raised for famine relief.

But the time and toll Live Aid took on Ure created a rift with the rest of Ultravox – and he soon parted ways for a solo career. Not surprisingly, the comedown from that massive achievement and the subsequent loss of his band, required a big adjustment. But for a scrappy Scot who grew up in a one-bedroom flat with four other people, he managed the shift.

Ure is still involved with Live Aid, as a trustee for the charity. He’s father to four girls and continues to perform regularly (recently doing shows with fellow ’80s artists Nick Heyward and Big Country). But like many people “of a certain age,” Ure has had to reinvent himself.

So he’s also a producer of both records and videos. He hosts a radio show. And perhaps most interestingly, he’s become a popular motivational speaker to businesses around the UK. Among the speech topics offered? “Achieving the Impossible” and “Making A Difference.” Apt subjects for an artist whose simple act of taking a phone call generated both.

Photo Credit: Midge Ure at Guilfest circa 2004 by Drew de F Fawkes on Flickr via Wikipedia.

0 comments on “The “Other” Live Aid Guy: Midge Ure”