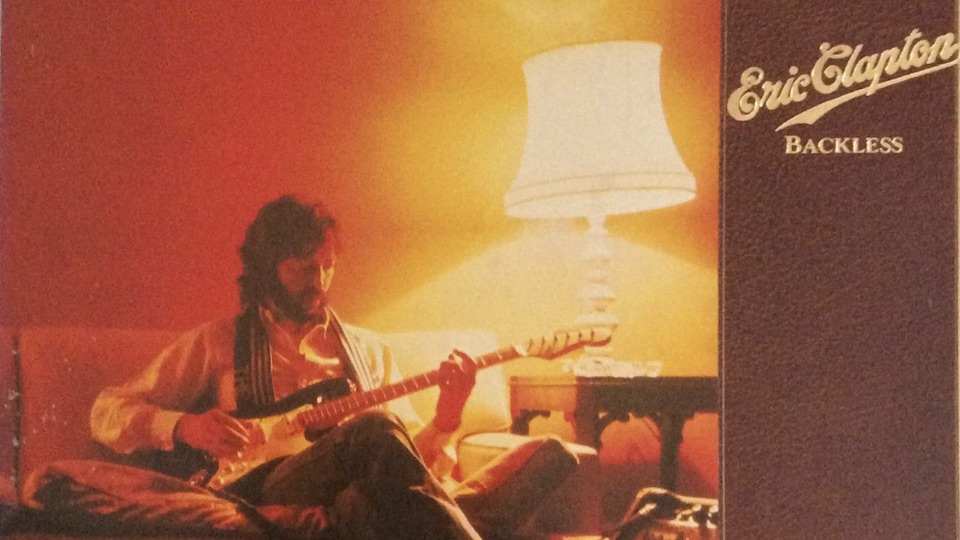 From the photo, I couldn’t tell if the guy was sitting on my grandmother’s living room sofa or the one in my basement. Didn’t really matter. The man oozed 70s cool: perfect hair, beard, collared shirt, blue jeans, side zip boots. With legs crossed, guitar resting across his lap, his relaxed repose seemed a nod to the effortless nature in the way he handled his instrument. As I stood in Sound Warehouse carefully studying the cover of Eric Clapton’s 1978 Backless album, I concluded that the man in the photo, hands down, was simply the coolest guy I’d ever seen.

Clapton’s success in the sixties was largely lost on me, a tad bit before my time. But his 1977 release, Slow Hand, put Eric Clapton on my radar. Music fans wanting to relive album releases of 1978 certainly have plenty to sort through. Van Halen released their debut album, an absolute game-changer. Bob Seger recorded Stranger in Town. Springsteen, Costello, The Rolling Stones, and The Cars all released classics. Blondie, Devo, The Clash, Talking Heads, and The Police got in on the action as well. If you’re looking to fill out a “best of” album list for 1978, Clapton’s Backless album would certainly not make the cut. Heck, most Eric Clapton fans wouldn’t put Backless on a list of the best Clapton albums. But as I stood in my favorite record store that day in 1978, flipping through albums in the bargain bin section, I couldn’t resist buying a “cut-corner” copy of Backless for the deeply discounted price of two whole dollars.

Back home in my room, safely surrounded by my blacklight posters and MAD magazine collection, I peeled the plastic off my new record and did what I always did: examine every square inch of the album. Pictures, liner notes, acknowledgments, record sleeve, label…all of it. “Special thanks to Chris Youle for use of the sofa.” How cool is that? Clapton thanked his sofa guy! Without a doubt, the coolest part of the packaging had to be the faux leather that ran up and down each edge of the gatefold. How much extra does it cost to make an album cover look, and feel, like a book from the Time-Life encyclopedia series, The Old West? Remember those? The encyclopedias covered in fake cowhide that came boldly embossed with gold lettering.

Looking back, it’s sometimes hard to figure out how a few albums from our youth end up sticking with us. Backless sneaked into my life by being a record that nobody else wanted. How could that even be? Let’s be clear, Backless is a marvelous collection of songs. Clapton opens side one with a melodic rendition of Bob Dylan and Helena Springs’, “Walk Out in the Rain.” It’s a song Clapton still pulls out from time to time when he performs live.

Clapton sounds so vulnerable on “Tell Me That You Love Me” that you might mistake him for a kid in his 20s. “Promises,” the album’s highest-charting single, as well as its B-side, “Watch Out for Lucy,” channel Slow Hand’s successful sound as if by design. It’s hard to figure out why those two tracks alone didn’t push the release to greater success. And then there’s Clapton’s cover of “Tulsa Time,” released around the same time as the Don Williams’ version went soaring to #1 on the Country Charts. In 1980, Clapton’s live performance of “Tulsa Time” would break into the Billboard Hot 100.

As underappreciated as Backless may be, it’s hard not to acknowledge what it delivered. Clapton’s fascination (turned obsession) with the Oklahoma musicians that became part of his sound as a solo artist, drove the musicianship of his recordings. JJ Cale, Bob Dylan, Danny Flowers, Marcy Levy, as well Clapton’s own work prop Backless with a Who’s Who of songwriting talent. Glyn Johns, who also produced Slow Hand, did a masterful job of sorting through the talent at his disposal and, in the end, made a delightful and supremely enjoyable record.

If Slow Hand upped the ante for Clapton, then perhaps Backless, as a follow-up release, didn’t deliver. It didn’t sell as anticipated (so many cut-corners) and the critical reviews were mediocre at best. Dave Marsh wrote in Rolling Stone, “Me, I made my peace with great expectations a while back. I like the new LP, but it wouldn’t make any difference if I didn’t.”

I suppose when I bought my copy of Backless, my expectations and Dave’s were quite different. Marsh seemed to expect too much. My expectations were stacked on the back of a cool photo, rich Corinthian leather (not), and a two-dollar price tag. In the end, none of that mattered. As a high school kid in the late 70s, I was more interested in the sound of Styx, Boston, Foreigner, and Tom Petty than I was Eric Clapton. Yet, we all have our exceptions.

Simply put, I will always enjoy listening to Backless. My “cut-corner” copy wore out. So did my 8-track. Both replaced, treasured, and pulled out on lazy Sunday afternoons. Sometimes, I think I’m the only one still listening.