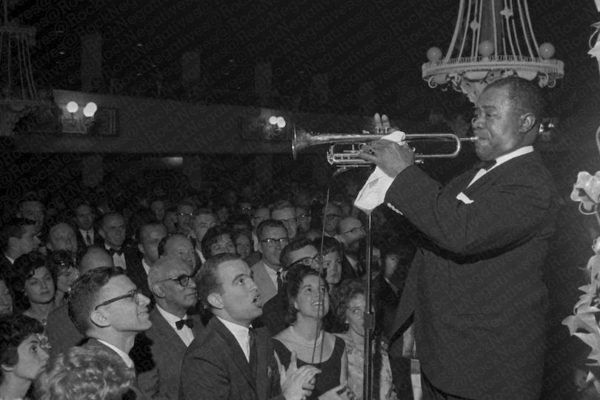 When asked to write a piece on Louis Armstrong (1901-1971), the sensible response is to run away screaming — for several reasons. Over the last half-century, Armstrong has been written about extensively, by some of the most renowned writers on pop culture. Every nook and cranny of his life has been explored, his legacy assessed, reassessed, and reaffirmed, moreso than any other American musical artist. His centrality to the development of jazz, and by extension of all American popular music, simply can’t be overstated. All roads lead to Louis. So what could I possibly add?

My thoughts moved to the place of jazz and of Louis Armstrong in my own musical life, and within the culture. I sometimes grieve that very few American music listeners really see the connection between “old-timey” music and the recordings they enjoy now. I perceive that we have niche-marketed ourselves into thinking of music as “here and now,” instead of a tapestry woven by many thousands of people, a history that is central to our identity(s).

A focus of my pop culture writing (and frankly, of my own brain) is the simple fact that everything comes from Something Else. What’s staggering about Louis Armstrong is that he’s a bit of a bottleneck in so many journeys back to the source of contemporary musical life. At some point or another, you bump into his legacy as a significant factor in the etymology of so many “terms” in our shared musical language. He just dropped a bomb on the place, people… and the signs are everywhere.

So, almost a century after Louis Armstrong came to prominence with the earth-shattering Hot Five recordings and his brief but crucial time with Fletcher Henderson, single-handedly changing the definition of an instrumental voice, I won’t try to tell you what you can look up for yourself. I’m going to direct my words elsewhere. This is a love letter to Louis:

You changed everything. You invented the world that I love. Your musical ‘mind’ is present in every pop vocal and instrumental performance of the last ninety years, whether by reflection or comparison. You were a one-man revolution, an epiphany writ large.

When jazz horn players were either noodling or playing staccato riffs, you showed them how to sing with a wind instrument. But you did so much more than that. You modeled an entirely new relationship between player and instrument, in a way so powerful that hearing you was a quasi-religious experience. You preached with that horn, you grieved, you told stories.

The impact of your recordings and performances was like a wave of stunning revelation sweeping across American musical life (not to mention the culture in general). No one could play the same way anymore. New techniques, new understandings, were instantly required. The closest analogy for more recent generations might be the way the Beatles made Bobby Vinton virtually irrelevant overnight.

But despite their genius, the Beatles were synthesists and scavengers. You were an original. You were a blowtorch set to musty papers in an archive, moldy books full of rules that kept the fire of music, the shamanistic power of music, from the people.

When you played, time stopped. No — you took hold of time, and bent it to the imperatives of the story you had chosen. You slid and moved with bewildering creativity through the beat, but you also slid among and across the kaleidoscope of emotions and experience which had been denied, bleached out of American popular music.

And with all of these words, these scratching attempts to gather together some picture of your legacy and the sheer beauty of your work… when I think of you, Louis, I always think first of your entrances. The way everything around you sounds different as soon as you have pushed air through metal. The way attention is galvanized with stunning force. The way you manifest power and gentleness in every phrase.

I thank you for the astounding gift of each of those moments. I thank you for every time that your musical mind reached through the horn and showed mine the beauty that life and sound can offer.

3 comments on “All Roads Still Lead to Louis Armstrong”