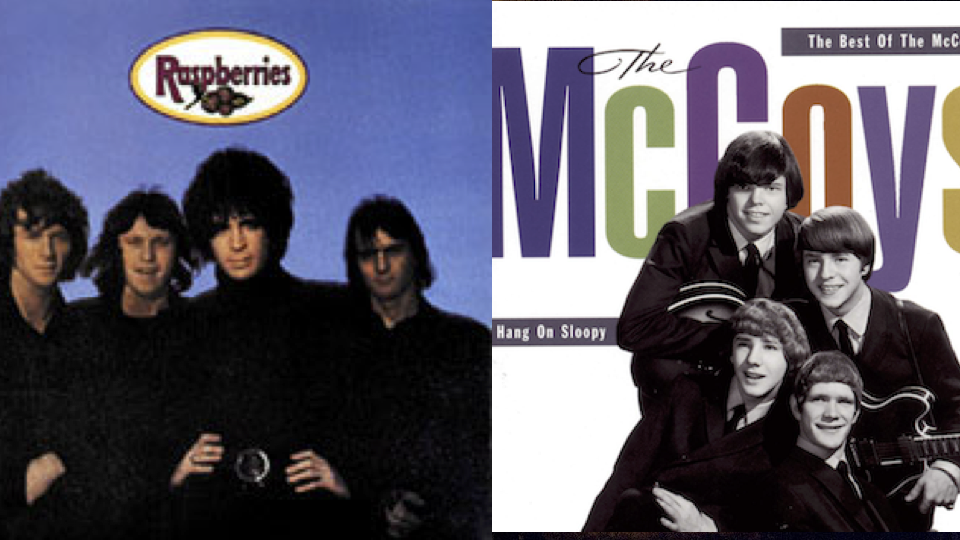 A rumored axiom in the world of rock ‘n’ roll is, “Like cocaine flakes, no two bands are alike.”  But in the case of the McCoys and the Raspberries, these bands have similarities.

Both hail from the Midwest.  Members of The McCoys from Ohio and Indiana, the Raspberries from Ohio.

The Raspberries’ big five included a #5 hit with “Go All the Way,” “I Wanna Be With You (#16),” “Overnight Sensation (#18), “Let’s Pretend” (#35), and “Tonight” (#69).  But after the groups dissolved, all that remained were successful though relatively short-lived solo careers for their leaders: the Raspberries’ Eric Carmen and the McCoys’ Rick Derringer.

But before these McCoys saw any Winter, the 17-year-old Richard Zehringer had signed to Bang Records and noticed that its logo had a pistol. He deduced that a derringer sounds cooler than “Zehringer” and thus was born Rick Derringer.  Rick recalled of Bang: “They were looking for four young guys who were really talented and really naïve so they can take advantage of us.”

The group, which opened for the Stones on their first American tour in 1966, made a Monkees-ish career move: eschewing bubble-gum-ish music for their own sound which became an offer that record buyers refused and sent the band into a tailspin.  In between a stint with Edgar Winter, Rick unleashed a great solo album All American Boy, with one song (“Hold”) co-written by Patti Smith.  Derringer also fired off guitar licks for Steely Dan in songs like “Showbiz Kids” and “Chain Lightning.”  In a 2020 interview, Derringer cited that he was the inspiration for the title of one of Dan’s biggest hits.  Rick recalled: “One night in the studio, (Donald) Fagen told me I should call him up.  And he wrote down his phone number and said, ‘Ricky.  Don’t lose that number.’”

But when it came to session and production work, groups (like Alice Cooper, Kiss) and artists (like Cyndi Lauper and Barbra Streisand) called Ricky. He even produced and played on Weird Al Yankovic’s first six albums.

Then there are the vastly underrated Raspberries’ records.  On their four albums, Carmen composed some well-crafted power pop perfections which will be heard in soundtracks a thousand years from now—when Guardians of the Galaxy Volume, Pt. 1,000 is released.  “Go All the Way” was used in the first Guardians movie and the Killers did a great version of it for Tim Burton’s Dark Shadows.  Perhaps Eric’s constantly pleading with his date to go all the way only for her to rebuff him inspired the singer to write “All by Myself “ when he went solo. It was a career move he made because his fellow Raspberries didn’t appreciate his efforts.  He skillfully dissected the power structure of every rock band: “The rest of the guys in a band have a choice, and the choice is to support these two guys, whether it’s Mick and Keith or Steven Tyler and Joe Perry.  The other guys either decide to support the two front guys or they don’t, in which case they are challenging the front guys for leadership and the band breaks up and the front guy goes solo. That’s pretty much the story of the Raspberries.  I read one of the funniest interviews ever with, I think it’s Tom Hamilton, the bass player of Aerosmith, and he calls himself and Joey Kramer and the other guy ‘the three less interesting guys.’”

But there was a time when two other guys, named Lennon and Springsteen, found the entire band interesting.  Lennon was even photographed wearing a Raspberries t-shirt.  Carmen noted: “In 1974, when the band was recording our fourth album Starting Over at The Record Plant in New York, John Lennon was in the studio next to us producing, Harry Nilsson’s Pussycats album. John frequently would come by and stick his head in the door, while we were mixing and told me that he was absolutely blown away by ‘Overnight Sensation’ and said that he and Ringo were going to ‘do promotion.’”

Springsteen, who once told Eric, “I think I must have worn out that Raspberries Greatest Hits album,” appears to have borrowed very liberally from the Razzies because the opening piano part of Bruce’s “Jungleland” and (the song) “Starting Over” sound quite similar, with Eric’s tune recorded a year before Bruce’s.

And despite the fact that the Raspberries arguably had more of a musical impact than the McCoys, Ohio’s legislature honored the McCoys by declaring “Hang On Sloopy” the state’s official rock song.

Let’s hope that Ohio’s legislature will convene to also erect a commemorative plaque in front of the Cincinnati house where Bo Donaldson (“Billy Don’t be a Hero”) once lived.

6 comments on “The McCoys and The Raspberries: The Solo Years”