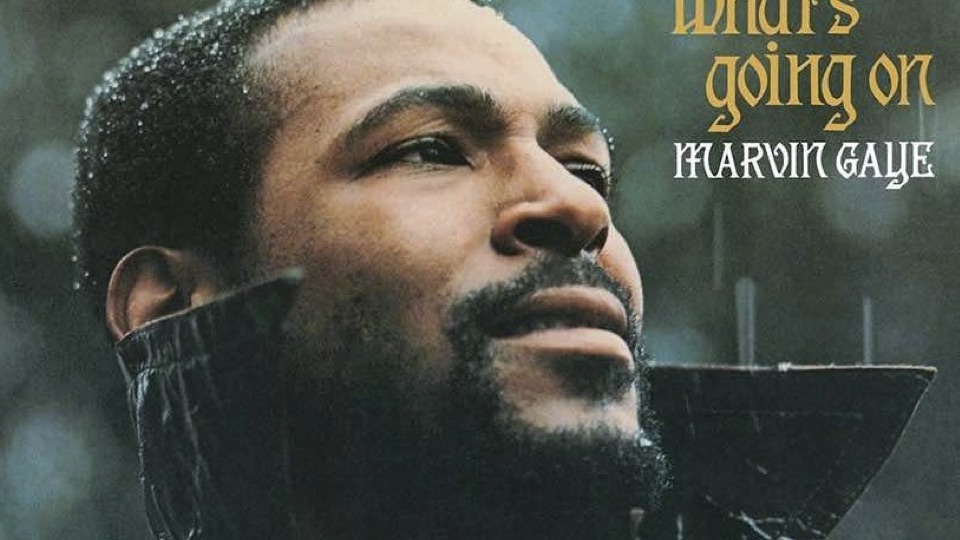 The late 1960s and early 1970s were a turbulent time for the United States. As the war in Vietnam raged on, issues like racial strife, police brutality, poverty, and political discord were dividing our country. During a tour stop in Berkeley, CA, Obie Benson, a member of the Four Tops, witnessed a confrontation between police officers and anti-war protesters. He was so disturbed by what he saw that (with the help of songwriter Al Cleveland), he composed a song expressing his thoughts about the incident. After The Four Tops passed on recording the untitled tune, Benson brought it to Marvin Gaye.

At the time, Gaye was struggling with some issues of his own. His close friend and frequent duet partner, Tammi Terrell, had died of cancer in March 1970, and he was deeply affected by her passing. Gaye’s marriage to Anna Gordy (sister of Motown founder Berry Gordy) was failing, he was having financial issues, and was also suffering from depression.

When Obie Benson and Al Cleveland showed him the song they’d come up with, Gaye initially thought it would be a good fit for The Originals, a Motown group he was working with as a producer. Benson was persistent in his opinion that Gaye should record it. He eventually agreed, and reworked the song, changing the melody and adding some new lyrics. On June 1st, 1970, Gaye entered the studio to record and produce the tune, now titled “What’s Going On.” The sessions included members of The Funk Brothers, Motown’s legendary backing musicians, as well as some talented players brought into the studio by Gaye, including saxophonist Eli Fontaine, who provided the song’s memorable opening riff. A pivotal moment occurred when Gaye asked a studio engineer to hear the two lead vocal tracks he’d completed, and it turned out that the tracks had been mixed together by accident. Gaye loved the sound and feeling of the multi-layered vocal and kept it for the final mix.

What grew out of the sessions wasn’t just a song, but a statement, one which perfectly captured the emotions and frustrations that Gaye and many others were feeling about the state of the world. Once Gaye played the completed version for Berry Gordy, the Motown leader was reluctant to release it, feeling the song was too political, and that the sound was more jazz-oriented than Motown’s current output. Gaye was determined to release “What’s Going On,” and with the help of Motown vice-president Barney Ales, the song was issued as a single on January 17, 1971. It was a huge success, topping the R&B charts, and hitting number two on the Billboard Top 100. “What’s Going On” eventually sold over two million copies, becoming the label’s fastest-selling single up to that time. This forced Gordy to allow Gaye to record an entire album in the same vein, despite his reluctance to release protest-oriented music. Gordy gave Gaye complete control over the production of the album, though he only allowed him 30 days to finish the project.

Gaye returned to the studio on March 1, 1971, and the main sessions for the album were completed in ten days. Along with its masterful title track, the rest of What’s Going On is a frank and powerful commentary on the issues facing society at the time, ranging from the Vietnam War to poverty, drugs, the ecology, and racial strife. “What’s Happening Brother” is a moving portrayal of a Vietnam vet, and the problems he faces once he returns home. The song is based on conversations Gaye had with his brother Frankie, who had served in Vietnam. “Mercy Mercy Me (The Ecology)” deals with environmental issues, something which many Americans were just becoming aware of at the time. “Flyin High (In the Friendly Sky)” speaks openly about the allure of drugs and the circumstances which can trap you in a cycle of addiction.

The fact that What’s Going On is structured as a concept album, with each song segueing to the next, only adds to its power. Songs like “Inner City Blues (Make Me Wanna Holler)” and “Save The Children” feel just as timely now (if not more so) than they did when this record was first released. Listening to this album gives you the sense that Marvin Gaye is sitting down to have a spiritually-minded and intense conversation with you. He’s preaching to us in a very personal way. What’s Going On’s groundbreaking mix of soul, gospel, funk, and classical sounds adds to the album’s immeasurable power. Gaye made a huge leap forward as an artist and producer with this remarkable work, which never fails to move and inspire us as listeners.

When What’s Going On was released on May 21, 1971, the album was an instant success. It stayed on the charts for over a year and sold two million copies, spawning three hit singles, becoming both Motown and Gaye’s best-selling album up to that time. This deeply moving and inspirational record continues to have a profound and lasting influence. The title song has been covered by Chaka Khan and Cyndi Lauper, among many others. In 2020, Rolling Stone magazine placed it in the number one spot on their most recent list of The 500 Greatest Albums of All Time. 50 years after its original release, What’s Going On is just as timely, powerful, and relevant as ever.