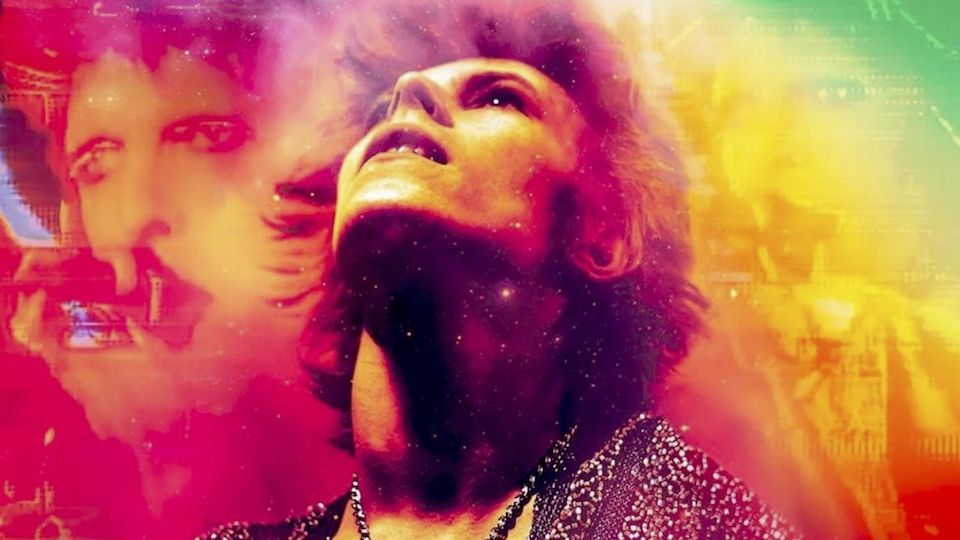 David Bowie was rock’s ultimate “vaudeville artist”, a singer whose stage theatrics and costume changes were the result of finely crafted artistry, every movement carefully rehearsed, even if they seemed spontaneous. But behind the glitz stood an earnest individual, who enjoyed pursuing any book he had not yet read, redirecting his art to reflect the findings and incorporate the perspectives as he best understood them.

He died in 2016, leaving behind a legion of faithful disciples who understood his mission to meld the intellectual with the artful. Bowie’s catalog stands up with the best England has yet offered to the world, effortlessly jumping from the shock tactics of Glam Rock to the more cerebral workouts that made up Low and Lodger. So the only way to commemorate Bowie is to delve into the artist’s mind, providing a film that is polished and plaintive.  Moonage Daydream sets out to do just that.

Beautifully curated by Brett Morgen, Moonage Daydream is nothing short of a triumph, a film that will benefit novices and please die-hards. Because what Moonage Daydream provides isn’t necessarily history or finality, but context, allowing audiences to engage with the artist on his journey from hopeful teenager to 1980s stadium rock juggernaut, through a series of impressive directorial interpolations and fade-outs. It’s the most impressive rock feature since Get Back, but has more mainstream appeal, contextualizing The Thin White Duke’s orbit in a more manageable two hours, compared to Peter Jackson’s three-part serial.

The film highlights Bowie’s desire to capture the moment, however it was presented to him, whether it was entertaining audiences to the sounds of faraway planets, or embracing the challenges of stagecraft, through his strangely impressive turn in The Elephant Man.

Visually, the film is stunning, highlighting the importance of color in Bowie’s discography, although Morgen is wise enough to let the music do the heavy-lifting for the audience (the film only flirts with the trappings of documentary filmmaking – indeed, it would be wiser to call this film an art pop piece based on Bowie’s life.)

The Man Who Sold the World producer Tony Visconti oversaw the music, lifting whole cues from the music he helped put together. The film represents a tapestry of music, jumping from genre to genre, highlighting Bowie’s desire to experiment with form at all points, singular in his vision to put together music for fans who were growing suspicious of pop. From the crackling fire of his rock output to the more European textures of the late 1970s, Bowie never shied away from his art, convinced that the best way to be powerful was to be dedicated.

Created with the blessing of the Bowie estate, the film is a kaleidoscopic vision of the artist as a musical force. Anyone aching for the misdemeanors David Jones got up to will have to wait for the inevitable Netflix documentary, and curiously, not a single Bowie album cover pops up in the film’s 140-minute runtime. But taken as a hagiographic re-creation, Moonage Daydream is nothing short of a marvel, demonstrating Morgen’s desire to showcase Bowie’s vision and versatility in a manner the artist would have found fitting. For much like the artist himself, the visuals cloak a more serious creature, safely tucked away from the masses, with a grin attached to his face. Squawking like a pink monkey bird!