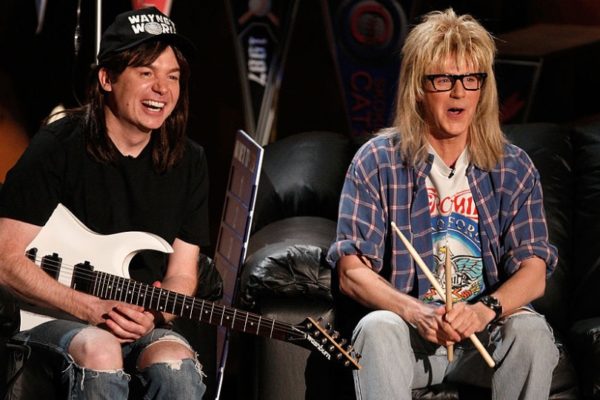 Our first thought upon discovering that 2017 is Wayne’s World‘s 25th anniversary was “No way!” But as Garth Algar (Dana Carvey) would say: “Way.” That is one comedy that totally rocks. It also got us thinking of the various musicals that Saturday Night Live has spawned … for isn’t Wayne’s World with all its musical numbers a very unconventional variation on the form. Below is a list of five movies with serious music roots that display the range and style that is SNL talent from the last three decades.

1. Eddie Murphy: Dreamgirls
Dreamgirls, a somewhat fictional account of the rise of The Supremes, is one of the most beloved Broadway musicals ever and its 2006 film version did not disappoint. The movie not only stars Beyoncé but launched the acting career of Jennifer Hudson and earned an Oscar nomination for Eddie Murphy who gave a layered performance as promoter Jimmy Early. If you thought Murphy’s talents as a singer were limited to James Brown impressions on SNL and the novelty hit “My Girl Wants to Party All the Time” you were in for a big surprise.

2. Bill Murray: A Very Murray Christmas
Nothing cures the blues at Christmas like watching Bill Murray sing “The Christmas Blues” and other holiday classics with all his celebrity friends. The conceit is cute: Murray is snowed in (with his old SNL piano accompanist Paul Shaffer) at NYC’s Carlyle Hotel where he ends up passing the time with Jason Schwartzman, Jenny Lewis, David Johansen, Rashida Jones and Maya Rudolph. Unlike Chris Rock who desperately tries to escape the special, fans of Murray (and director Sofia Coppola) are going to enjoy being lost in this winter fairy tale. The only thing better would be if Murray showed up outside your door one day to serenade you with “Baby It’s Cold Outside.” Hey, it could happen!

3. John Belushi and Dan Aykroyd: The Blues Brothers
John Belushi and Dan Aykroyd didn’t just don dark sunglasses and strike a pose. They immersed themselves in the blues. Indeed, comedy’s one-time reigning dynamic duo put out the album Briefcase Full of Blues two years before the movie came out. The Blues Brothers movie itself was filled with cameos (Aretha Franklin, Cab Calloway, Chaka Khan, Ray Charles) but Belushi and Aykroyd’s alter egos Jake and Ellwood — pretending to be a band called The Good Ol’ Boys — stands out among all of this flick’s hilarious musical moments. At a rowdy bar where the crowd likes two kinds of music (“country” and “western”), the Blues Brothers depart from their planned set to the theme song to Rawhide. Thanks to a well-placed bull-whip, they win over the crowd and even manage to make a few cowboys wipe away some tears. That is the power of music… and beer.

4. Adam Sandler: The Wedding Singer
This movie is a love letter to totally awesome ‘80s music and totally awful ‘80’s hairstyles. It’s also the movie in which Adam Sandler finds his own Meg Ryan: namely, Drew Barrymore. When Sandler’s character Robbie Hart gets dumped by his girlfriend Linda, he goes into a tailspin leading to him singing “Love Stinks” at a wedding then writing his own despairing tune “Somebody Kill Me.” Sandler’s character finds a sense of purpose again when he falls for Barrymore’s Julia — engaged at the time to a jerk named Glenn. With the help of punk legend Billy Idol, Robbie serenades Julia at 20,000 feet and saves her from a life of being Julia Guglia. Now that’s love!

5. Mike Myers and Dana Carvey: Wayne’s World
Wayne’s World is the Excalibur of comedies about music fans. The film not only jumpstarted Rob Lowe’s career as a comic actor but reintroduced Alice Cooper as the coolest of rockers to a younger generation. It also resurrected Queen’s rock masterpiece “Bohemian Rhapsody” – which as the movie points out is the perfect epic to sing along to in the car with plenty of time to get out, gaze at a guitar in a music store window then get back in your car and shout ”Scaramouche, Scaramouche, will you do the Fandango?” Mike Myers insisted on using this Queens song at a time when the band’s popularity had waned dramatically. For that we bow down and say, “Excellent.”