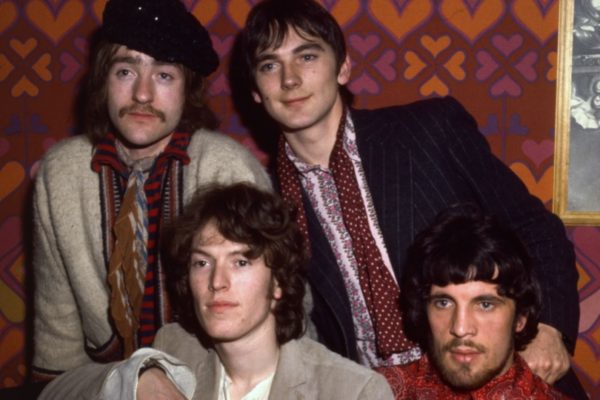 The musical alchemy of Traffic was unlike any other of the 1960s. Rooted in blues and R&B, the group embraced classical, jazz, folk, African, rock, soul, Latin, and Indian genres then found ways of assimilating more than one at a time in song after song. In some ways, the band could easily be called rock’s first “getting it together in the country” by holing up in a rural cottage in the Berkshire Downs – light years away from Swinging London – to write and rehearse for several months prior to setting foot in the studio.

But how did it all begin? Well, let’s start with Steve Winwood, the prodigiously gifted young man from a musical family in Birmingham, who was equally adept at guitar and piano as a child, then fell under the spell of Ray Charles. As his voice began to break, the young Winwood incorporated Charles’ vocal depth and his phrasing even as he continued to explore music pioneers like Nina Simone, Jimmy Smith, Oscar Peterson, and Buddy Guy. Eventually, Winwood and his older brother Muff joined The Spencer Davis Group in 1964.

The SDG — who were sharing bills with The Graham Bond Organization, John Mayall & The Bluesbreakers, and The Yardbirds in 1965 — scored their first number one hit the following year with “Keep On Running” (which usurped The Beatles’ “Day Tripper”). It was during this period that Winwood bonded with Eric Clapton, who took him under his wing when Clapton moved to London and sympathized with this kindred artist who was not too happy about being a teen pop star six to ten years younger than all his bandmates. In short, Winwood was primed for change.

In Birmingham, Winwood was drawn to fellow musicians outside SDG: in particular, Chris Wood, a self-taught flautist (and later saxophonist) with a painterly approach who’d just been accepted by the Royal Academy; Jim Capaldi, a singer-songwriter/drummer whose previous bands included the marginally successful Deep Feeling; and Dave Mason who went to do some interesting work with Jimi Hendrix soon after.

When free from SDG responsibilities, Winwood and Wood, Capaldi, and Mason would jam at a local club called The Elbow Room, where touring musicians came to gamble, score hash, listen to Stax records, and of course play. Amid this scene, the four formed a communal mindset; and with support from Island Records’ chief Chris Blackwell, Traffic (as Capaldi named them) set up in a remote cottage in Berkshire, beginning in April 1967.

Since Winwood was still completing SDG obligations, including a final single “I’m A Man,” he invited Capaldi, Wood and Mason to the studio to overdub percussion and harmonies. What resulted was indescribable stardust layered on an already great track. You might say that “I’m A Man” is the first Traffic record in all but name.

Following their retreat, the group convened at Olympic Studios with producer Jimmy Miller. The first round of recording yielded the title track and two others for the film Here We Go Round the Mulberry Bush, also a holdover obligation from Winwood’s SDG days. Following this, they cut their official debut single, “Paper Sun b/w Giving to You” which landed in the UK’s Top 10. Looking back, the B-side is even better: a Cannonball Adderley-styled groove that gives all four musicians a chance to solo amid a wholly new brand of psychedelic jazz-rock.

The debut album, Mr. Fantasy, was cut throughout the summer of 1967. This landmark release captures all the funk and wonderment of the era. A freewheeling record, it’s grounded by the title track, in which Winwood’s electric guitar playing is easily on a par with Hendrix, Clapton or Beck and crests with “No Face, No Name, No Number,” an achingly beautiful pastoral of psychedelic folk. Bolstered by Dave Mason’s whimsical compositions, Traffic’s debut proved a truly exquisite start.

When Mason briefly left the band for his solo career, the remaining trio of Winwood, Wood and Capaldi began work on the second album, Traffic. The first song “40,000 Headmen” proved a wonderfully idiosyncratically folksy tune with a heavy soul chorus. Soon thereafter Mason returned with his own batch of fine songs: “You Can All Join In,” “Feelin’ Alright?” and “Cryin’ To Be Heard.” Other tracks such as “Pearly Queen,” “Who Knows What Tomorrow May Bring” and “No Time To Live” remain some of the band’s finest work from this era.

Following Traffic’s release, the group actually looked set to disband completely at the close of 1968 but not before cutting their electrifying slice of soul-pop “Medicated Goo” — co-written with Miller. Cracking with bravado and sparkling like vintage Stevie Wonder, this song was packaged with a mix of B-sides and live material on Last Exit (1969) which may be one of the finest contractually obligated postscripts to any band’s mid-career.