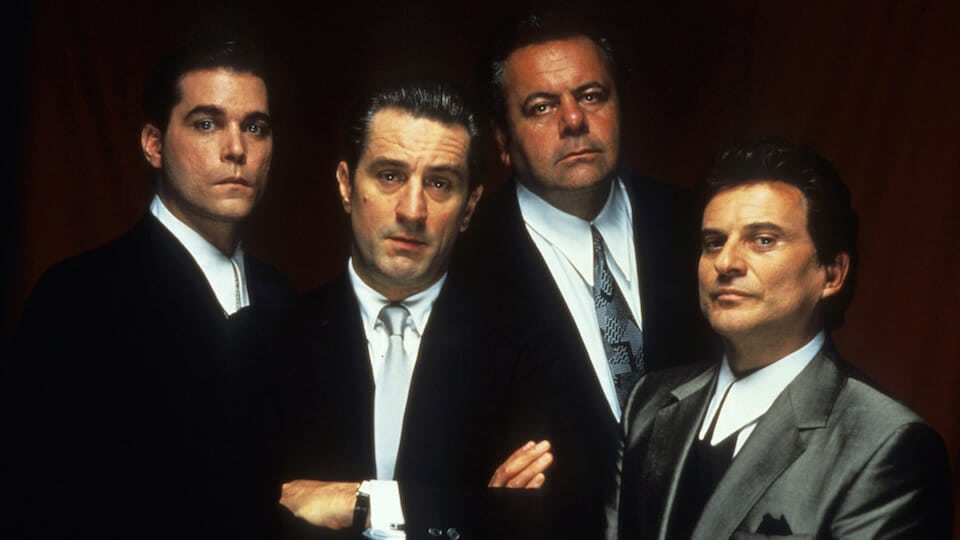 From Mean Streets to Who’s That Knocking at My Door, it’s safe to say Martin Scorsese pretty much invented the rock soundtrack as we know it. The director’s astute understanding of music is seen in the brilliant way he pairs songs with action. One of his most brilliantly scored films is the mob classic Goodfellas. Not coincidentally, Scorsese acted as the music supervisor for the movie, and through his masterful directing and song curating, recreated the spirit of a time and place in which music is as important as the dialogue. Scorsese reportedly knew what songs he was going to use three years before he started production; it’s that singular vision that makes Goodfellas one of the most exciting films ever. Rock on!

It’s a testament to Scorsese’s masterful understanding of the power of juxtaposition that Donovan’s folksy “Atlantis” is heard during one of Goodfellas’ most brutal scenes. The song arrives when Jimmy Conway (Robert De Niro) and Tommy DeVito (Joe Pesci) turn a bar fight into a bloodbath — pounding the living daylights out of gangster Billy Batts (Frank Vincent). This counterintuitive choice brings new terror to an already gruesome scene; the free-love, hippy vibe of “Atlantis” couldn’t be further from the violence we see on-screen. The result is a terrifying glimpse into the dark side of the human spirit. The lyrics “though gods they were” seem to foreshadow how even those who think themselves invincible will eventually fall and meet their end.

You May Also Like: “6 Great Indie Film Soundtracks You May Have Never Heard”

Derek and the Dominos’ “Layla”

Although Eric Clapton’s “Layla” is an unrequited love song for George Harrison’s then-wife Patti Boyd, Scorsese used this rock n’ roll classic as the score for the aftermath of a gangster massacre. Plucking the famous coda that features Jim Gordon’s piano and Duane Allman’s slide guitar, Scorsese crafts one of the most beautifully edited sequences in film history. Interestingly, Scorsese played this bit of “Layla” on set while he filmed the scene to ensure he could perfectly match the camera’s movements with the sorrowful ebb and flow of the tune. As a result, not only do we savor a delightful irony of a gorgeous melody with bloodies corpses, but we also end up sensing that this is the end of these fellas’ Golden Age.

The Crystals’ “Then He Kissed Me”

Scorsese’s knack for matching songs with action is nowhere more apparent than in the Copacabana scene, a three-minute Steadicam shot that has gone down in history as one of the most impressive moments in cinema. The camera leads us from the streets into the club’s bowels as Henry Hill (Ray Liotta) and Karen (Lorraine Bracco) go on their first real date. All the while, The Crystals’ 1963 hit “Then He Kissed Me” plays over the scene, underscoring the feeling of a young woman being swept off her feet. The song is as breathless and intoxicating as the sequence itself with the whirlwind romance described in the lyrics echoing the dizzying world of glamour with powerful seductions all its own.

Cream’s “Sunshine of Your Love”

Smoking is bad for you, this we all know. But De Niro’s Conway taking a long, cool drag from his cigarette is enough to make anybody want to light up. Near the end of Goodfellas, as this mobster becomes increasingly paranoid after the Lufthansa heist, he decides to whack his fellow crewmembers. When De Niro watches Morrie Kessler (Chuck Low) stumble out, he raises his brow and smirks. It’s at this moment that the guitar riff from Cream’s “Sunshine of Your Love” comes in, instantly giving us a glimpse into what Jimmy is plotting against Morrie. This subtle moment carries a hugely sinister energy.

Sure, Scorsese has a penchant for classic rock and Motown but he’s also been known to throw a punk anthem into the mix. This was certainly the case when he set Henry Hill’s decline to Sid Vicious’ anarchist rendition of Frank Sinatra’s signature number. Hill and his gangster cronies love to think of themselves as cultured sophisticates (like Old Blue Eyes himself), but really they’re just brazen-faced bullies in bespoke suits. Vicious’ feral cover of Sinatra’s ego-filled anthem is more mockery than tribute, aggressively deriding the macho mindset of men like Hill and Sinatra. It’s a version dripping in sarcasm, and its use here is equally tainted in irony. Hill hasn’t done it his way: he’s ended up as a suburban shmuck. Brilliant.

0 comments on “Soundtracks That Rock: “Goodfellas””