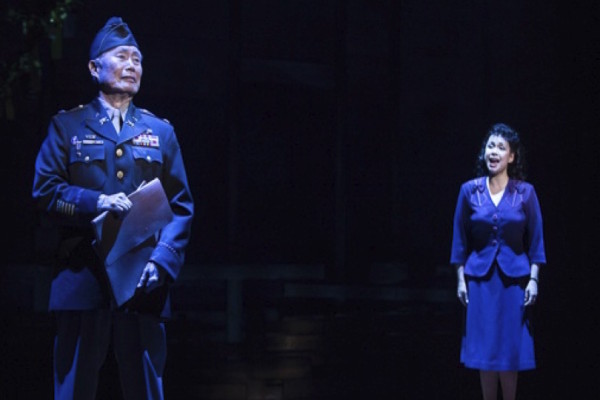 Ever since a night in 1966 when I got my first glimpse of “Star Trek,” I’ve been a loyal fan. No, I don’t do the conventions or wear the costumes (bitch, please….). But I still can’t pass up a re-run. I’ve particularly loved how George Takei has evolved from playing “Sulu” into one of the coolest presences on social media. His Tweets and Facebook posts are genius, and have gone a long way in raising awareness of LGBT issues. Now the 78-year old actor/activist is raising awareness of a dark chapter in 20th century history, the internment of Japanese Americans during WWII. He and his family were among the 100,000 that were rounded up (at gunpoint) after Pearl Harbor and moved into camps surrounded by barbed wire. Takei was five years old.

He recounts the story in a musical that just hit Broadway entitled “Allegiance.” Lea Salonga, who starred in the original “Miss Saigon” also appears. For Takei, it’s important to share how American citizens – as he and his family were—could be placed in such a horrifying situation. And he adds that this shameful story has relevance in today’s highly charged political climate, where immigration is such a hot button topic. At any rate, nice to see George Takei stepping away from the bridge of the Enterprise and boldly going into a new and meaningful chapter. Well done, Mr. Sulu.

Click here for more details on when the filmed version of Allegiance is playing in a theater near you.