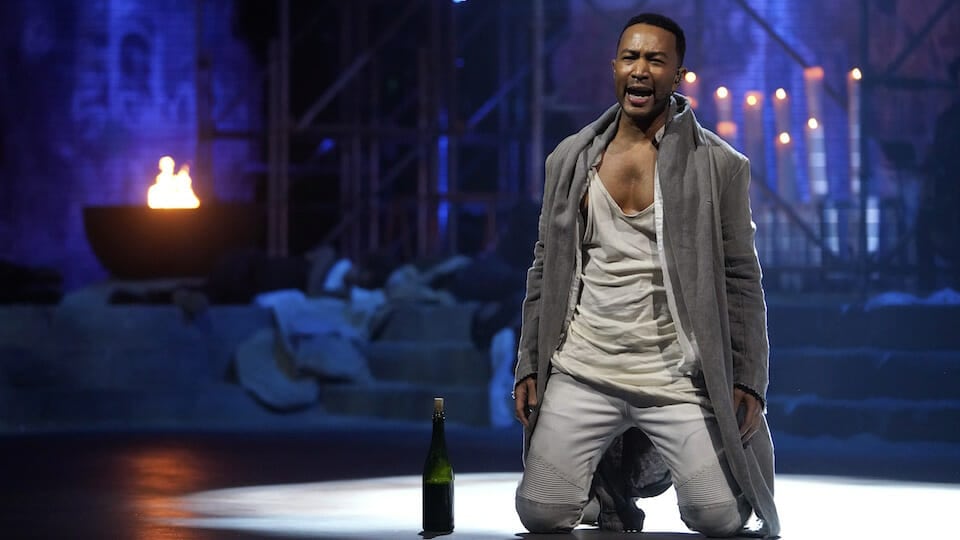 Though it’s easier than ever to catch all your favorite TV shows and movies via any number of devices and platforms, getting to the theater to see a live play or musical can still be arduous (babysitters, parking, etc.) and expensive. But thanks to the recent resurgence of live primetime musical telecasts on network television, the magic of Rodgers & Hammerstein and Andrew Lloyd Webber among others can be enjoyed for free from the comfort of your couch! In the last five years alone, nine Broadway musicals have hit the air. Here’s how they rank thus far, from “pretty good” to “downright great.”

While NBC’s live telecasts of Peter Pan were a bonafide hit with audiences in the 1950s, this 2014 version starring Get Out’s Allison Williams and Oscar-winner Christopher Walken didn’t quite take flight. To its credit though the technical elements went off without a hitch and the production did introduce American audiences to Broadway vets like Kelli O’Hara, Christian Borle, and Taylor Louderman. And that’s not nothing.

The New Orleans-set adaptation of the Passion story narrated by Tyler Perry had promise and ambition even if its use of secular music felt out of context. Regardless, Jencarlos Canela poured his heart into playing Jesus, and Seal made a surprisingly solid Pilate. In truth, the production was really more like a halftime concert than televised theater. It also provided some post-American Idol work to former contestant Chris Daughtry.

Laverne Cox was a delight as Dr. Frank-n-Furter. We expected no less. What we didn’t expect was FOX to do a shot-for-shot remake of the cult hit a la Gus Van Sant’s Psycho. Also, by airing this one during “family hour,” the show’s signature elements — best suited to its usual midnight showings (i.e. all the camp, sex, and sexual innuendos) — were totally sanitized. Dammit, Janet!

See Related: “Broadway May Have Found Its Own House Band in Sky-Pony”

As per usual, the immensely likable Jane Krakowski proved herself to be the MVP of this project, even when paired up former SNL cast members Ana Gasteyer and Maya Rudolph, both of whom had their moments to shine. And thanks to this talented cast, A Christmas Story Live got a leg [lamp] up on a lot of its live musical predecessors.

Bolstered by Tony winners Audra McDonald, Laura Benanti, and Christian Borle, this ambitious three-hour production really provided some few moments when the hills felt alive. As the nun-turned-governess, Carrie Underwood’s singing was stronger than her acting (her yodeling on “Lonely Goatherd” was undeniably great) and who doesn’t want to relish hearing one of Rodgers & Hammerstein’s most memorable scores?

Welcome to the 1960s! Always a crowd-pleasing musical, this production was energetic, fun, and colorful. Filmed live on the Universal backlot in Hollywood and incorporating the audience as extras, Hairspray Live was full of standout performances from its starry cast including Kristin Chenoweth, Jennifer Hudson, Ariana Grande, and Broadway’s original Edna Turnblad, Harvey Fierstein. You can’t stop the beat, but Hudson stopped the show with her powerful rendition of “I Know Where I’ve Been.”

The third time proved to be the charm for the Peacock Network with this dazzling and imaginative production of the disco-tinged adaptation of The Wizard of Oz. As Dorothy, newcomer Shanice Williams more than held her own among the rest of the talented celebrity cast and certainly brought it home with her powerful rendition of “Home.” With eye-popping costumes and sets, daring choreography and aerial stunts, and stellar performances all around, it’s a wonder anyone would ever want to leave Oz for the Midwest.

How do you make summer lovin’ fresh? Hire Hamilton director Thomas Kail and let him use two soundstages and the Warner Bros backlot. Pushing the boundaries of both stage and TV in ingenious ways, Grease Live was also the first to incorporate an in-studio audience, which immediately gave the production a jolt of energy — dare we say Greased Lightning? — missing from prior live musicals. Beyond Kail’s incredible direction, Grease Live’s biggest strength was its talented, enthusiastic cast who didn’t miss a beat during the three-hour production and clearly went together like rama lama lama ka dinga da dinga dong.

It was hard not to gasp watching John Legend’s Jesus float through a cross and ascend to the heavens at the end of the stunning broadcast of Andrew Lloyd Webber’s rock opera. This shot was just one of many Emmy Award-worthy reasons Jesus Christ Superstar lands at the top of our list. From its divine cast (which also featured pop star Sara Bareilles, rocker Alice Cooper, and Broadway talent Brandon Victor Dixon) to its grungy, urban production design, the team behind JCS clearly put a ton of passion into this deeply moving, energized piece of live theater. A superb two hours of television. A superstar indeed.

0 comments on “Musicals on TV: So Far, So Good”