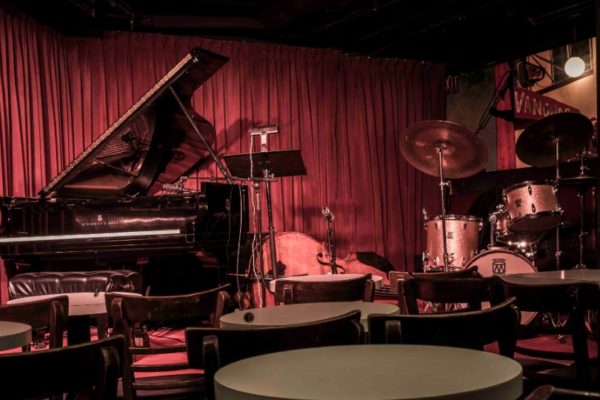 Jazz as we know it today might not exist without the cultural crucible of the bebop-era clubs on New York City’s 52nd Street, not to mention the kindling provide by hotspots of subsequent generations, like the freewheeling loft scene of the ’70s and the downtown avant-jazz axis of the ’80s. Today a slew of venues in Brooklyn and Manhattan keep the city’s jazz lovers sated with performances by vaunted vets and innovative up-and-comers alike. And while the rich blues club scene that existed in New York in the ’80s and early ’90s is mostly a memory, there are still one or two spots that continue to serve up the real deal for those who know where to look. And if you don’t know where to look for the best in jazz and blues in NYC, we’ve got you covered with some salient suggestions.

Bar LunAtico
This small Bed-Stuy spot has only been open for a couple of years, but it wasted little time establishing a rep for featuring some of the city’s brightest lights in modern jazz. On any given night you can catch world-class players like Roy Nathanson and Curtis Fowlkes or a batch of impressive artists on the rise. The schedule is also peppered with a shifting menu of world music as well as the best in NYC blues from the likes of Irving Louis Lattin and Chris Bergson. Stop by for the Sunday gospel brunch too, which has been graced by the transportive Naomi Shelton among others.

Barbes
Park Slope’s Barbes has been bringing Brooklyn an intoxicating cocktail of jazz, world music, and gloriously indefinable esoterica for about a decade and a half. Like so many NYC music spots, they recently faced a do-or-die moment due to high rent, but the community rallied around them to raise enough to keep Barbes going for a good while to come. The Western swing sounds of The Brain Cloud, the forward-looking jazz of Big Lazy, and the raucous Balkan brass bash that is the Slavic Soul Party are just a few examples of the eclectic fare you’ll find there.

The Jazz Standard
A joint venture with superhero restaurateur Danny Meyer’s Blue Smoke barbecue spot on East 27th Street, The Jazz Standard has been one of New York’s biggest jazz joints since the ’90s. Over the years everyone from Mose Allison to Archie Shepp has been heard within its walls. And to this day you can pop in and be treated to the likes of legendary guitarist Pat Martino, NYC institution the Mingus Big Band, and renowned bassist/bandleader Ben Allison. The barbecue’s nothing to trifle with either!

The Stone
Sax man John Zorn, who has always been sort of a scene unto himself, opened The Stone, a non-profit venture, in the East Village in 2005 in order to provide an outlet for uncompromising avant-jazz artists and sui generis experimentalists lacking in venues for their vision. Zorn made it a healthy hub of forward-looking music, with everyone from the lofty likes of Laurie Anderson and Fred Frith to lesser-known names appearing there. As of this writing, The Stone is in transition to a new home at The New School in Greenwich Village, with performances split between the two spots, but The New School will be the primary residence for Stone sets starting in 2018. Go find out why Matthew Shipp, Peter Apfelbaum, Steve Coleman, and many more feel at home at The Stone.

Terra Blues
On Bleecker Street in the heart of the West Village, Terra Blues is pretty much the sole survivor of the NYC blues boom that went through the ’80s into the early ’90s. In that fertile period, there were blues rooms all over town boasting regional faves and the occasional living legend. Terra Blues, which has been in business since 1990 and has hosted everyone from Hubert Sumlin to Little Milton, is still going strong today, and a new generation of blues and soul slingers like Valerie June and Ruthie Foster have been heard there, along with local heroes like Bobby Radcliff, Michael Powers, and Clarence Spady. Clubs like this one and The Blue Note show there are still some musical traditions to be found in the Village.

The Village Vanguard
Speaking of long-standing hotspots, when it comes to jazz clubs, they don’t get much more iconic than The Village Vanguard, which has been one of the world’s premier jazz venues since the 1940s, though its initial iteration actually opened in the ’30s. The club was opened by Max Gordon, whose widow Lorraine continues its stewardship into her 90s. There’s no need to list the countless luminaries who have graced the Vanguard stage down through the decades. Scan the collection of any jazz fan and you’ll find a multitude of albums recorded there. The important thing is that the Vanguard remains as vital as ever, with storied vets like Tom Harrell and Joe Lovano sharing the stellar schedule with trailblazers like Mary Halvorson and Kurt Rosenwinkel. If they’re sold out, then you can always try nearby Smalls Jazz Club.