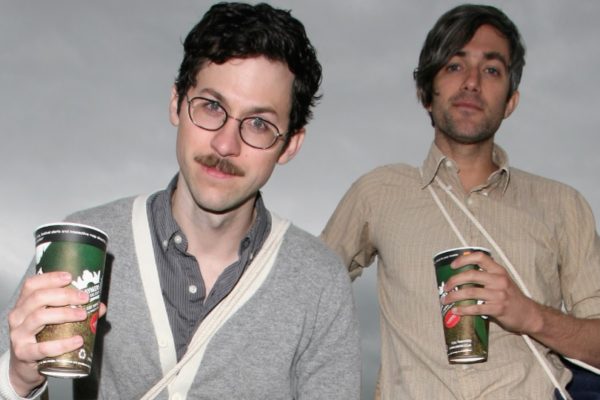 Quick! Name a band that crossed over from the world of music into the world of TV or film. The Monkees? The Partridge Family? The Blues Brothers and Spinal Tap? Well, actually those are all the reverse. Bands that went from TV/film to the radio. Think a little harder… Maybe you said Flight of the Conchords now? Very good! But we’re guessing the band We Are Scientists did not cross your lips. There’s a good reason for that. Their show, Steve Wants His Money, is fairly unknown stateside and is currently a short-form series. So who the heck is We Are Scientists? Well, they’re Keith Murray and Chris Cain, a NYC-based musical duo who make unique alternative music influenced by a mish-mosh of artists such as David Bowie, B.B. King, and Franz Ferdinand. Think of them as a slightly harsher version of The Shins or maybe a less-hook-heavy variation on Green Day.

The two first thundered onto the music scene with the song “Nobody Moves, Nobody Gets Hurt” — a frenetic distorted-guitar, drum-crazed number on their 3-song, self-titled debut album released in 2004. The band then had some success — in the UK especially — with songs like “Chick Lit” and “After Hours” which both cracked that country’s top 40. And they’re only getting better over time as their most recent LP Helter Seltzer includes a tune (“We Need a Word”) that sounds like something John Lennon would have penned. (The lyrics have a playful complexity as singer Murray is either asking for affirmation of his love or encouraging his partner to pick a safe word.)

With a shared background in stand-up comedy, these guys are quick with the sarcasm but also painfully self-aware. Which brings us to their show Steve Wants His Money. With seven episodes running a mere three and a half minutes each, the UK series follows the musical pair as they execute various schemes to raise funds to pay back Steve, a supposedly violent and imposing never-seen character. In the earlier episodes, the show feels largely improvised but as you continue to watch, you quickly see that these two are a natural comedic pair who play well off each other and to the camera. Various UK celebrities pop up starting with UK radio host Edith Bowman in Episode 1 to whom they pitch an idea for Porn Radio. “We show everything,” Cain promises.

In later episodes, Murray parts with his beloved Yamaha keyboard when they can’t sell a sampling beat to rapper Kano; a pitch for edible newspapers ends with Murray asking New Music Express editor Krissi Murrison “Why do you think the Bible sold so many copies?” before answering “because the cover tastes like nuts.” The ideas are repeatedly cockamamie: Should the group Alphabeat create a drink called Alphabeer? What would’ve happened if Starbucks had been called Carbucks? What if they made a horror flick called Chainsaw Cock?

Our main question: Will MTV UK (where the series premiered) please give them a proper show? We don’t know yet. Until then, we’re binging on their imaginative music videos like the ones for “Buckle,” “Rules Don’t Stop,” and “The Great Escape” and re-watching an amusing instructional video which never fails to make us chuckle. Here’s hoping there’s a longer form installment of Steve Wants His Money in the not-too-distant future.