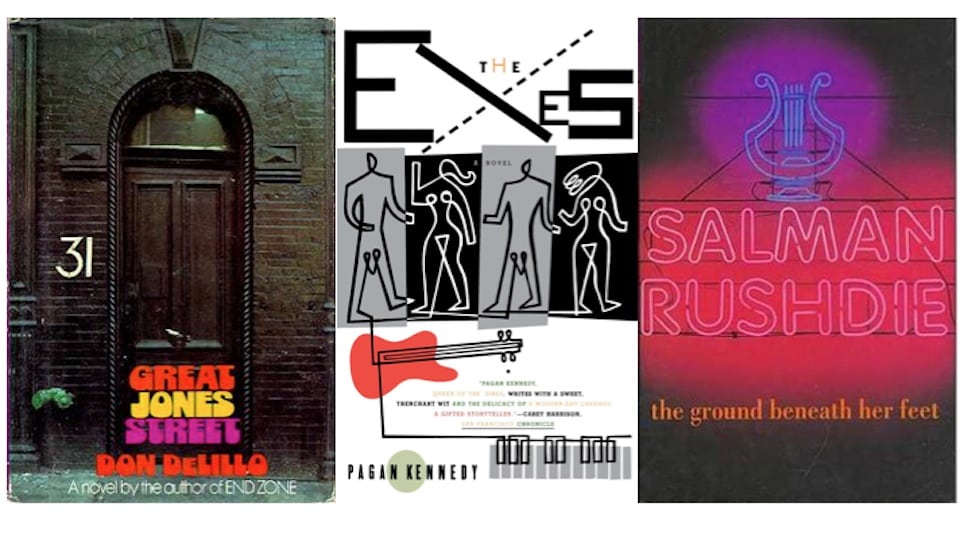 The rock n’ roll lifestyle has always been a certifiably reliable draw for readers who like a good page-turner. Given its built-in soundtrack alongside its endless potential for debauchery, the rock scene has proven a time-tested source for many a best-selling memoir and award-worthy biography. But it’s also an effective backdrop for fictional tales. Be it life on the road, questionable business practices, rampant addiction, or just the glorious process of making pop music, rock n’ roll fiction has developed its own loyal following and readership — and attracted some impressive authors. Here are some titles sure to hit the right notes should you be looking for your next book.

Jennifer Egan’s A Visit From the Goon Squad (2011)

This witty tour-de-force has a sweeping interlocking narrative, time travel, and weirdly merging characters. (Bennie, Sasha, and Lou — all in the pop music biz — have shared histories that get tantalizingly revealed.) There’s even a PowerPoint presentation! Author Egan has all manner of writing tricks up her sleeve that keep shape-shifting before your eyes as she recounts the excitement of some charismatic, troubled souls. What it does make clear is that time (the “goon” spoken of in the title) is the great leveler for us all.

A gorgeously written tale of some lovable losers, Henderson makes poetry of troubled youth who create their own family in response to clueless, callow parents. During a time frame that stretches from the late ‘80s through 2006, backwoods Vermont gives way to NYC’s grungy East Village punk scene, where anti-hero Jude winds up after his Vermont buddy’s overdose. His laid-back stoner dad welcomes him, but Jude gets pulled into the “straight edge” music scene — a fad that eschewed drugs and sex while keeping the music tough and alternative. Jude and his makeshift family evolve around a teen mom; this is a story of quirky love and radical acceptance. It was made into a Sundance Festival movie in 2015 starring Ethan Hawke.

Related: “5 Rock Memoirs: From the Nitty-Gritty to the One with Sting”

Author Blake Nelson is a grown man by any standard but has made his living as an author in part due to his uncanny ability to plug into the minds, hearts, and speech patterns of teens. This Young Adult book has a relatable adolescent hero in Pete, a genuine music geek who leaves his life of jamming in clubs with his musician dad to play his bass with a band that is infinitely less substance, more style. He sells his soul to the dissolution of band life before throwing in his lot with a young lady more in line with his true sensibilities. Somewhat niche in its appeal, Rock Star Superstar is an enjoyable, closely examined exploration of the Portland music scene and should be valued as such.

What an appealing first novel of pop music, road life, and unrequited love! Lou is a likable guy bored with post-collegiate drudgery so he signs on as a roadie for an up-and-coming band composed of his college buddies. He falls hard for the rather Jezebel-like Cree, the band’s beautiful drummer, and becomes a reluctant side person to the increasingly popular musicians while selling merch, navigating arguments, and living the poignant dilemma of being near growing fame without being of it. Some characters may be a little two-dimensional but they move the narrative forward; O’Keefe has a breezy and light touch to his writing that keeps the reader engaged.

Related: “All The Rock That’s Fit to Print”

Salman Rushdie’s The Ground Beneath Her Feet (1999)

Rushdie’s epic wordsmithery is put to fine use in this novel where he takes the Orpheus and Eurydice myth and superimposes it on Vina, Ormus, and Rai, a love triangle for the ages but placed into the second half of the 20th Century. Vina is the perished love object of the two men and Rai is the narrator-hero who lays out this lengthy, arcane, and layered tale of the timelessness of love. Not always an easy read and encyclopedic in its references, the brilliant Rushdie cleverly merges real history with the fictitious. Based in the global world of rock n’ roll, the music itself becomes the metaphor for Orpheus’ lyre. It’s a mind-bend and an education.

Kennedy was dubbed “The Queen of Zines” by Wired magazine, and her hip, plugged-in voice serves this story well. The Exes is the gimmicky name for a bunch of band members who are talented enough not to require a gimmick. Still, there is an inherent humor and humanity as we follow these Boston-based band-mates on tour; all are former lovers and their shared histories and complexities make for good beach reading. An insightful look at rock road life, this novel is full of fun characters who communicate with some vibe.

There is an endearing dorkiness in Hornby’s best-selling novel about a lovably neurotic record shop owner Rob — not to mention his equally wonky employees — and his quest to find love after it’s been lost. These young men are all about obscure LPs and making lists of their favorite musicians and tracks. The reveal of this musical underworld is appealing and poignant. Rob starts out self-involved and commitment-phobic then the novel takes us through a journey of self-discovery through pain and maturity. Witty and delightful, this novel struck a chord with many and was made into a hit movie in 2000 co-starring John Cusack and Jack Black, then hit Broadway as a musical in 2006.

The first fabulous installment in Doyle’s Barrytown Trilogy, The Commitments is a ribald tribute to the down-but-not-out working-class youth of Dublin and the adventures that follow when enterprising music lover Jimmy Rabbitte decides to put a soul band together. His pals are skeptical at first, but a couple of them have skills worth mining. They track down a vocalist they heard wailing the blues while drunk and Jimmy assembles a worthy band of scamps (along with three spirited backup ladies), hones them to a hard shine, and they take their temporary bluesy show to various venues. An older seasoned session musician finds his way to them; there is hilarity in Joey “The Lips” Fagan tooting his literal horn, seducing the women, and perplexing his young bandmates. Written almost completely in Irish-inflected dialogue, it takes some initial concentration, but then the reader can ease into the hilarious hardscrabble triumph of these goofy music makers. A great movie rendition followed in 1991 and became a cult success.

A wise, dark, confounding tale of the cost of fame is at the center of DeLillo’s third novel. His hero, Bucky Wunderlick (who has distinct echoes of Bob Dylan) splits his national tour at the height of his success and hides out in a “cold as a penny” room on Great Jones Street in Lower Manhattan — the working definition of 1970s bleakness. In his physical absence, a cult of fans continues to grow. A scorched-earth satire on the saddest parts of making it big but still feeling small, Great Jones Street also memorable for its precisely rendered vision of 1970s New York City. The Bowery was so completely different than the artsy commercial boutique-y nightmare that it’s become, and DeLillo pinpoints this earlier place and time with shivering intensity.

Written by Pynchon in the mid-1960s, Lot 49 focuses on Oedipa Maas (one of many extraordinarily odd names in the book), a housewife who is not wrapped too tight and is made more fragile when she discovers that she is the co-executor of her former lover’s estate. This leads to wild twists and turns and a literary house of mirrors that also provides great mocking commentary on the hippie culture in California. Featured is a band called The Paranoids, who provide a mocking centerpiece as a quasi Beatles, with members who cannot see the world through their moptops and take on faux British accents as a way to gain money and fame. You might dub this one a novella of great post-modernist quirk.

Photo Credit: Fair use images of the covers of Don DeLillo’s Great Jones Street, Pagan Kennedy’s The Exes and Salman Rushdie’s The Ground Beneath Her Feet.