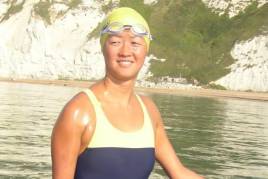 If you had told me when I was 20 years old that I would swim the English Channel sixteen years later, I would have laughed you straight out of the room. Because, even though I had learned to swim at a young age and even though I had swum on swim teams from seventh to ninth grade, no one (including myself) considered me to be a swimmer. Yet there I was — 9 a.m. on September 6, 2006 — standing on the Viking Princess, a sturdy 36-foot fishing vessel that doubles as a Channel swimmer escort boat, in my blue and yellow one-piece swimsuit, getting greased up by my crew member. (The water in the Channel is very salty and the Vaseline helps reduce chafing.) It was a sunny day for which I was thankful because swimming on cloudy days is terribly gloomy. The sea was unusually calm, something else I was also thankful for since rough seas can wreak havoc with the stomach and the shoulders.

I knew I could go the distance: 21 miles as the crow flies. But the water temperature, 61 to 62 degrees, worried me. (Most pools are kept at around 80 degrees.) For two years, I had been training in cold water for this swim and yet, there was no guarantee that I would make it across. But it was time to find out. I climbed down the boat ladder into the Channel to start heading to Shakespeare Beach. My swim started at 9:41 a.m.

Fourteen hours and nineteen minutes later, I stumbled out of the water and walked up on to the French shore in the pitch dark. (The boat held up a spotlight so I could see.) I had made it! I like to give myself full credit but in truth the swimming gods gave me a perfect day while my boat pilot navigated a smart route, and my crew fed me and encouraged me when I was really down. I’m OK with that because no one accomplishes anything big by themselves. But the initial desire to swim long and alone in the open water must always come from within. I love to swim. I love the feel of the water. And I love that it’s the only sport you can do in a horizontal position, without wearing shoes. Yes, I had become a serious swimmer. But how?

After I stopped swimming on the team in ninth grade, I barely did any sports, much less swim, for 15 years. Most of my twenties were spent doing sedentary activities: getting an M.B.A. and starting my career. Then one day, I realized I needed to get active. I went big and chose to run a marathon that was six weeks away—no small feat given that my longest run up until that point had been about 3 miles. I bought a book, condensed a 20-week training program into six weeks (definitely not recommended), and just barely finished. Feeling emboldened after that, I took up triathlon, intrigued by the challenge of Ironman. But Ironman favored biking and running while swimming consistently proved to be my strongest leg. So after my third Ironman, I sought a new challenge. Something different, more unique, and tinged with a hint of danger. Namely, open water swimming.

Most of my thirties were spent training for and swimming long distances in open water. I swam around Manhattan. I swam in the shark-infested waters around the Cape of Good Hope. I swam in the shark-infested waters from Catalina Island to Long Beach. I swam in the jellyfish-laden waters of Long Island Sound. I swam the Strait of Gibraltar, or as I like to say, from Europe to Africa. As a person, I am certainly more than my open water swims. And yet, these swims have come to define me, as if they stand as great pillars within me.

Now, in my late forties, I have gravitated back to the pool. I joined Swim Fort Lauderdale, a master’s swim team in sunny south Florida where we train outdoors but in warmer and highly chlorinated water. The longest event I swim now is the mile and I love it! And though I have stated many times that I’ve retired from open water swimming, people still ask me when my next big swim is. It is then that I hear a little voice within, urging me to go on, un-retire, and get back into the sea.

1 comment on “Going the (Extreme) Distance on Land and Sea”