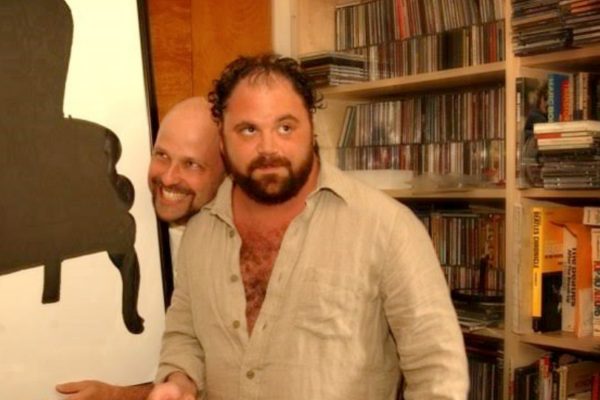 As any reader of CultureSonar knows, we’re hardcore fans of The Beatles. Our most popular content ever was a recent video deconstructing “Penny Lane.” So it makes sense that we’d be equally enthusiastic about Fabcast Podcast, which is deeply devoted to The Beatles, their genius and their legacy. Howie Edelson, one of that podcast’s co-hosts, filled us in on what the Fabcast has planned for the near future and how he came to be so enamored of the Fab Four. Check out our interview below.

Q: How did Fabcast Podcast come about exactly?

A: In short, it came about because of Stephen Bard. Bard and I have been thinking, analyzing, praying to, and in hysterics over rock since we met when I was 13 and he was 15 and over the years, we’ve just never stopped talking about music and relating it specifically to our lives. Bard had often mentioned us getting a radio show of some sort and as a radio producer I always shot it down. The podcast boom happened and it came up again, he mentioned a Beatles podcast — his words were: “Who BETTER than us???” I knew if we did do a podcast it needed to be directed at the larger rock world as opposed to just “Beatle-dom.” “Beatle-dom” is very immature. In many ways, it’s locked out all the lessons of The Beatles and become this uncomfortable asexual, apolitical, worship experience of their myth and stats. I’ve written extensively on the group over the decades and never got a sense that anyone OTHER THAN Beatle people knew what the f**k I was talking about, so when Bard and I decided to create Fabcast, we needed to make sure that it reached people that can understand the metaphysical. People that have smoked dope. People that are sexually liberated. People that think deeply about their lives. When you hear the words “Beatles Podcast” – you think of a sh**ty sounding production with dudes trying to either be comedians, DJ’s, on SportsCenter, or rattling off every fact like a lecture. We’re not that. We go beyond the story into the “WHY” – and most importantly, it’s cool. Girls are allowed. Our friend Dave Morrell, a legendary record promotion man in the ‘70s and ‘80s is on board with us and spent a lot of time with Lennon in the ‘70s. He’s got a unique insight on things as they went down.

Q: What’s been the most popular episode of the podcast so far? Why do you think that is?

A: I don’t know if it’s gotten the biggest numbers, but our two-part look at 1980 and the beautiful yet bruised relationship that still existed between Lennon & McCartney is probably our most creatively successful. The fact that from across the Atlantic Paul McCartney, through his song “Coming Up,” was able to nearly single-handedly inspire John Lennon to return to music in 1980 – fire up all of his creative juices, forcing him to change his environment, get out of the Dakota, finish the unfinished and create new music – is an incredible story. We get into things like that. Stuff that matters. Nothing we talk about doesn’t matter. Which is why we don’t pop out episodes every 15 minutes rattling off facts or “news.” It’s gotta matter. We’re laying it down as simply as possible, saying that these guys were conduits to GOD. The Beatles is an ELEMENT. Just because it makes you feel great doesn’t mean it’s silly or small. Beatles is heavy. We don’t sugar coat that fact.

Q: What are you most excited about in the upcoming season?

A: We’ve recorded, what I feel is the definitive take on The Beatles in 1968 – their music, their lives, what the work continues to mean. We’ve gone deep into 1972 and that weird space in which Lennon & McCartney are both writing and performing with their wives as their primary collaborators and respectfully fronting a couple of ramshackle, not quite B-list ensembles. We have our first special guest, renowned author Mark Lewisohn, who is beloved for his knowledge on the band and the sheer FACTS he’s uncovered. And if you’ve ever seen Lewisohn in an interview situation, the moderators or hosts just plow him for answers to their questions – like some Beatles hooker – they just want at his goods. But this is a guy who’s worked for The Beatles and McCartney – and the Lennon estate – on countless projects, and he’s brilliant, hysterically funny, and most definitely has an opinion – something he’s needed to keep far away from his research. This season we have him on as a DUDE. Not as “The Beatle Brain” – but as our buddy Mark, and it’s f**king amazing.

Q: What’s the most interesting response you’ve received to Fabcast Podcast so far?

A: A guy from Italy got in touch with me and told me that he’s waiting his whole life for something exactly like this. How does that not blow your mind?

Q: Was there a particularly interesting piece of trivia or an unexpected interpretation by one of your co-hosts that you hadn’t considered before?

A: Hands down that’s got to be Dave Morrell turning us on to the tape from The Beatles’ final meeting before the split. What makes it so interesting is that it comes from a full month AFTER the famed story of Lennon telling the band he wants a divorce in September 1969. This one – from OCTOBER – was taped for a sick Ringo Starr’s benefit. On the tape, Lennon, who’s already quit, is now backpedaling about future Beatles activity and there’s some brutally honest talk between Lennon, McCartney, and Harrison on what they think about one another’s recent work. Astonishing s**t. Took my breath away.

Q: When did you first become a bona fide Beatles fan?

A: About three. I was big into Keith Partridge, Elvis ‘60s movies, and The Monkees. My father – who was an Alan Freed kid, and far more into Rosemary Clooney – uncharacteristically told me I needed to hear – and I remember this like it was this morning – I needed to hear “the real thing.” He dropped the needle on Meet The Beatles and the world began.

Q: If there was someone who wasn’t familiar with The Beatles discography (crazy as that sounds perhaps) and you had a chance to convert them, what album would you suggest as an entryway and why?

A: Meet The Beatles. You start where the heart begins.

A: “In My Life.” Although massively popular and a standard, no amount of accolades are too much for that melody, that playing, that song, that record. It’s Lennon and McCartney – and The Beatles – transcending who they are and what they do. If you wanna know what made Brian Wilson write “God Only Knows” – look right there. “In My Life” is as evolved and righteous as music gets. It’s bigger than us. You meet your mate or you meet your kid – it’s that. Only they did that. There can never be enough said about “In My Life.”

You can listen to Fabcast on iTunes or SoundCloud.

3 comments on “Come Together With More High-Caliber Beatles Analysis”